It may also be translated as Khan of Khans, equivalent to King of Kings. In modern Mongolian, the title became Khaan with the 'g' sound becoming almost silent or non-existent (i.e. a very light voiceless velar fricative); the ğ in modern Turkish Kağan is also silent. Since the division of the Mongol Empire, emperors of the Yuan dynasty held the title of Khagan and their successors in Mongolia continued to have the title. Kağan and Kaan are common Turkish names in Turkey.

The common western rendering as Great Khan (or Grand Khan), notably in the case of the Mongol Empire, is translation of Yekhe Khagan (Great Emperor or Их Хаан).

The title was first seen in a speech between 283 and 289, when the Xianbei chief Tuyuhun tried to escape from his younger stepbrother Murong Hui, and began his route from the Liaodong Peninsula to the areas of Ordos Desert. In the speech one of the Murong's general named Yinalou addressed him as kehan (Chinese: 可寒, later Chinese: 可汗), some sources suggests that Tuyuhun might also have used the title after settling at Qinghai Lake in the 3rd century.[2]

The Rouran Khaganate (330-555) was the first people to use the titles Khagan and Khan for their emperors, replacing the Chanyu of the Xiongnu, whom Grousset and others assume to be Turkic.[3] However, many scholars believe the Rouran were proto-Mongols.[4][5][6]

The Avar Khaganate (567–804), who may have included Rouran elements after the Göktürks crushed the Rouran ruling Mongolia, also used this title. The Avars invaded Europe, and for over a century ruled the Carpathian region. Westerners Latinized the title "Khagan" into "Gaganus" or Cagan et Iugurro principibus Hunorum. 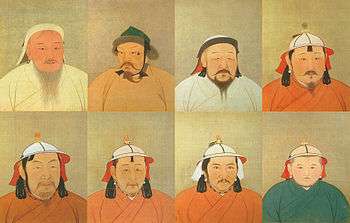 8 of 15 Khagans of the Mongol Empire

The Secret History of the Mongols, written for that very dynasty, clearly distinguishes Khagan and Khan: only Genghis Khan and his ruling descendants are called Khagan, while other rulers are referred to as Khan. Khagan or Khaan refers to Emperor or King in the Mongolian language, however, Yekhe Khagan means Great Khagan or Grand Emperor.

The Mongol Empire began to politically split with the Toluid Civil War during 1260–1264 and the death of Kublai Khan in 1294, but the term Ikh Khagan (Great Khan, or Emperor) was still used by the emperors of the Yuan dynasty (1271–1368), who assumed the role of Emperor of China, and after the fall of the Yuan in China (1368) it continued to be used during the Northern Yuan dynasty in Mongolia homeland.[7] Thus, the Yuan is sometimes referred to as the Empire of the Great Khan, coexisting with the independent Mongol khanates in the west, including the Chagatai Khanate and Golden Horde. Only the Ilkhanate truly recognized the Yuan's overlordship as allies (though it was effectively autonomous). Because Kublai founded the Yuan, the members of the other branches of the Borjigin could take part in the election of a new Khagan as the supporters of one or other of the contestants, but they could not enter the contest as candidates themselves.[8] Later Yuan emperors[lower-alpha 1] made peace with the three western khanates of the Mongol Empire and were considered as their nominal suzerain.[9] The nominal supremacy, while based on nothing like the same foundations as that of the earlier Khagans (such as the continued border clashes among them), did last for a few decades, until the Yuan dynasty fell in China (1368).[lower-alpha 2]

After the breakdown of Mongol Empire and the fall of the Yuan dynasty in the mid-14th century, the Mongols turned into a political turmoil. Dayan Khan (1464–1517/1543) once revived Emperor's authority and recovered its reputation in Mongolia, but with the distribution of his empire among his sons and relatives as fiefs it again caused decentralized rule. The last Khagan of the Chahars, Ligdan Khan, died in 1634 while fighting the Qing dynasty founded by the Manchu people. In contemporary Mongolian language the word "Khaan" and "Khan" have different meanings, while English language usually does not differentiate between them. The title is also used as a generic term for a king or emperor (as эзэн хаан, ezen khaan), as in "Испанийн хаан Хуан Карлос" (Ispaniin khaan Khuan Karlos, "king/khaan of Spain Juan Carlos").

The early Khagans of the Mongol Empire were:

The title became associated with the Ashina ruling clan of the Göktürks and their dynastic successors among such peoples as the Khazars (cf. the compound military title Khagan Bek). Minor rulers were rather relegated to the lower title of khan.

Both Khagan as such and the Turkish form Hakan, with the specification in Arabic al-Barrayn wa al-Bahrayn (meaning literally "of both lands and both seas"), or rather fully in Ottoman Turkish Hakan ül-Berreyn vel-Bahreyn, were among the titles in the official full style of the Great Sultan (and later Caliph) of the Ottoman Empire, reflecting the historical legitimation of the dynasty's rule as political successor to various conquered (often Islamised) states. (The title began: Sultan Hân N.N., Padishah, Hünkar, Sovereign of the House of Osman, Sultan of Sultans, Khan of Khans, Commander of the Faithful and Successor of the Prophet of the Lord of the Universe; next followed a series of specifically 'regional' titles, starting with Protector of the Holy Cities of Mecca, Medina and Jerusalem.)

"Khagan" is the second title of Safavid and Qajar shahs (kings) of Iran. For example, Agha Muhammad Khan Qajar, Fath Ali Shah and other Qajar shahs used this title. The nickname of Shah Ismail and other Safavid shahs is Kagan-i Suleyman shan (Khagan with the glory of Solomon).

Emperor Taizong of Tang was crowned Tian Kehan, or "heavenly Khagan" after defeating the Tujue (Göktürks).[10][11][12] A later letter sent by the Tang court to the Yenisei Kirghiz Qaghan explained that "the peoples of the northwest" had requested Tang Taizong to become the "Heavenly Qaghan".[13] The Tang Dynasty Chinese Emperors were recognized as Khagans of the Turks from 665-705; however, we have two appeal letters from the Turkic hybrid rulers, Ashina Qutluγ Ton Tardu in 727, the Yabgu of Tokharistan, and Yina Tudun Qule in 741, the king of Tashkent, addressing Emperor Xuanzong of Tang as Tian Kehan during the Umayyad expansion.[14][15]

Among the Norsemen and Slavs

In the early 10th century, the Rus' people employed the title of kagan (or qaghan), reported by the Persian geographer Ahmad ibn Rustah, who wrote between 903 and 913.

It is believed that the tradition endured in the eleventh century, as the metropolitan bishop of Kiev in the Kievan Rus', Hilarion of Kiev, calls both grand prince Vladimir I of Kiev (978–1015) and grand prince Yaroslav the Wise (1019–1054) by the title of kagan, while a graffito on the walls of Saint Sophia's Cathedral gives the same title to the son of Iaroslav, grand prince Sviatoslav II of Kiev (1073–1076).