For the television series, see Game of Arms. 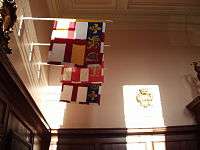 Banners of the arms of office of the three current English Kings of Arms. Visible are the banners of Norroy and Ulster King of Arms, Clarenceux King of Arms, and Garter Principal King of Arms.

King of Arms is the senior rank of an officer of arms. In many heraldic traditions, only a king of arms has the authority to grant armorial bearings. In other traditions, the power has been delegated to other officers of similar rank.

Crown of an English King of Arms

In England, the authority to grant a coat of arms is subject to the formal approval of the Earl Marshal in the form of a warrant. In jurisdictions such as the Republic of Ireland the authority to grant armorial bearings has been delegated to a chief herald that serves the same purpose as the traditional king of arms. Canada also has a chief herald, though this officer grants arms on the authority of the Governor General as the Queen's representative through the Herald Chancellor's direct remit. Scotland's only king of arms, the Lord Lyon, exercises the royal prerogative by direct delegation from the Crown and like the Chief Herald of Ireland and the old Ulster King of Arms needs no warrant from any other office bearer.

In the Kingdom of Spain, the power to certify coats of arms has been given to the Cronistas de Armas (Chroniclers of Arms).

The English and Scottish kings of arms are the only officers of arms to have a distinctive crown of office, used for ceremonial purposes such as at coronations (as opposed to peers, who instead of a crown wear a coronet). At the coronation of Queen Elizabeth II, the kings of arms used a crown trimmed with sixteen acanthus leaves alternating in height, and inscribed with the words Miserere mei Deus secundum magnam misericordiam tuam (Have mercy upon me, O God, according to Thy great mercy; Psalm 51). When this crown is shown in pictorial representations, only nine leaves and the first three words are shown. Recently, a new crown has been made for the Lord Lyon, modelled on the Scottish Royal crown among the Honours of Scotland. This crown has removable arches (like one of the late Queen Mother's crowns) which will be removed at coronations to avoid any hint of lèse majesté.

Kings of Arms and Heraldic Authorities of the United Kingdom 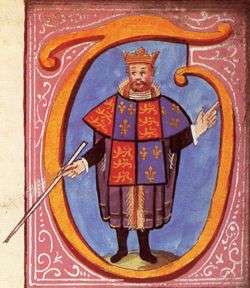 Kings of Arms for England, Wales and Northern Ireland

Chief or State Heralds of Ireland and the Commonwealth 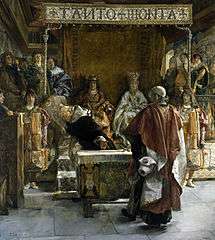 Kings of Arms appear in a painting where Grand Inquisitor Tomás de Torquemada in 1492 asks the Catholic Monarchs to issue the edict for expulsion of the Jews from Spain.

Former Kings of Arms of Portugal

King of Arms of the Royal House of Bourbon Two Sicilies

Media related to King of Arms at Wikimedia Commons