This article is about the penitential psalm. For the musical settings based on the psalm, see Miserere. 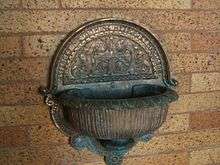 Psalm 51 (Septuagint numbering: Psalm 50), traditionally referred to as the Miserere, its Latin incipit, is one of the Penitential Psalms. It begins: Have mercy on me, O God. The psalm's opening words in Latin, Miserere mei, Deus, have led to its being called the Miserere mei or just Miserere. It is often known by this name in musical settings. The psalm is frequently used in various liturgical traditions because of its spirit of humility and repentance.

Many psalms include introductory text ("superscription") in the manuscript attributing it to a particular author and sometimes to an occasion. The New King James Version of the Bible introduces it: "To the choirmaster. A Psalm of David, when Nathan the prophet came to him, after he had gone in to Bathsheba." The Hebrew linguist and scholar Robert Alter translates it less literally, making explicit what is only implicit in the words used: "...a David psalm, upon Nathan the prophet's coming to him when he had come to bed with Bathsheba." He comments: "The Hebrew verb used for both Nathan and David is 'to come to' [or 'into']', but in the former instance it refers to the prophet's entering the king's chambers, whereas the latter instance reflects its sexual sense."[1]:180

The superscription in the Septuagint reads: "For the End: A Psalm of David, When Nathan the Prophet Came unto Him, When He Went in unto Bersabee (Batheshba) the Wife of Urias."[2]

Robert Alter has "Do not fling me from Your presence", commenting: "as elsewhere, this Hebrew verb has a connotation of violent action for which the conventional translation of it as 'cast' is too tame."[1]:182

In Judaism, several verses from this psalm are given prominence:

The most frequently used psalm in the Eastern Orthodox and Byzantine Catholic Churches, Psalm 50 (Septuagint numbering) it is called in the "Greek language Ἥ Ἐλεήμων" E Eeleḯmon, and begins in "Greek Ἐλέησόν με, ὁ Θεός" Eléïsón me, o Theós.

In the Daily Office it is recited in each of three aggregates (evening, morning and noonday).

In the Divine Liturgy it is recited by the deacon while he censing the entire church at the conclusion of the Proskomedie.

It is also a part of many sacraments and other services, notably, as a penitential psalm, during the Mystery of Repentance.

In the Agpeya, Coptic Church's book of hours, it is recited at every office throughout the day as a prayer of confession and repentance.

In the Roman Catholic Church this psalm may be assigned by a priest to a penitent as a penance after Confession. Verse 7 of the psalm is traditionally sung as the priest sprinkles holy water over the congregation before Mass, in a rite known as the Asperges me, the first two words of the verse in Latin. This reference lends a striking significance to the Mass as Sacrifice, given that Hyssop was used for the smearing of blood on the lintels at the first Passover.

In the Divine Office, it was traditionally said at Lauds on all ferias; the 1911 reform restricted this use to the ferias of Advent and Lent. It is otherwise said as part of the weekly cycle on Wednesday at Matins. In the Liturgy of the Hours, it is prayed during Lauds (Morning Prayer) every Friday.

Psalm 51 was recited by Lady Jane Grey before her beheading at the Tower of London in 1554.

A section of verse 17 is often used as the invitatory antiphon the Liturgy of the Hours.

Parts of Psalm 51 are used as a responsorial psalm in both the Revised Common Lectionary and the Roman Catholic Lectionary on Ash Wednesday and on other days.

The Miserere was a frequently used text in Catholic liturgical music before the Second Vatican Council. Most of the settings, which are often used at Tenebrae, are in a simple falsobordone style. During the Renaissance many composers wrote settings. The earliest known polyphonic setting, probably dating from the 1480s, is by Johannes Martini, a composer working in the Este court in Ferrara.[5] The extended polyphonic setting by Josquin des Prez, probably written in 1503/1504 in Ferrara, was likely inspired by the prison meditation Infelix ego by Girolamo Savonarola, who had been burned at the stake just five years before. Later in the 16th century Orlande de Lassus wrote an elaborate setting as part of his Penitential Psalms, and Palestrina, Andrea Gabrieli, Giovanni Gabrieli, and Carlo Gesualdo also wrote settings.[6] Antonio Vivaldi may have written a setting or settings, but such composition(s) have been lost, with only two introductory motets remaining. Settings were also written by Costanzo Festa, Johann Sebastian Bach, Giovanni Battista Pergolesi and Saverio Selecchy.

One of the best-known settings of the Miserere is the 17th century version by Roman School composer Gregorio Allegri. According to a famous story, Wolfgang Amadeus Mozart, aged only fourteen, heard the piece performed once, on April 11, 1770, and after going back to his lodging for the night was able to write out the entire score from memory. He went back a day or two later with his draft to correct some errors.[7] That the final chorus comprises a ten-part harmony underscores the prodigiousness of the young Mozart's musical genius. The piece is also noteworthy in having numerous high Cs in the treble solos.

Modern composers who have written notable settings of the Miserere include Michael Nyman, Arvo Pärt, and James MacMillan. The album Salvation (2003) by the group Funeral Mist included the song "In Manus Tuas" which used verses 3–16 in Latin from Psalm 51. Also, the Antestor song "Mercy Lord", from the album Martyrium (1994), also cites Psalm 51. The song "White As Snow" by Jon Foreman from his Winter EP includes lines from Psalm 51. The song "Restore To Me" by Mac Powell and Candi Pearson-Shelton from Glory Revealed (2007) includes lines from Psalm 51. In the Philippines, the Bukas Palad Music Ministry includes their own version of "Miserere" in their album "Christify" (2010).

Parallels between the Ancient Egyptian ritual text Opening of the mouth ceremony and Psalm 51 are pointed out in "Psalm 51 and the 'Opening of the Mouth' Ceremony," by Benjamin Urrutia, Scripta Hierosolymitana: Publications of the Hebrew University of Jerusalem, volume 28, pages 222–223 (1982). The parallels include: