This article is about the headgear. For other uses, see Coronet (disambiguation).
Not to be confused with cornet. 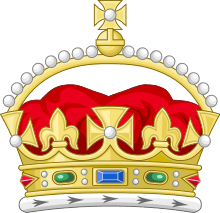 The crown of the British Heir Apparent

The word stems from the Old French coronete, a diminutive of co(u)ronne ("crown"), itself from the Latin corona (also "wreath"), from the Ancient Greek κορώνη (korōnē, "garland, wreath").

Traditionally, such headgear is – as indicated by the German equivalent Adelskrone (literally "crown of nobility") – used by nobles and by princes and princesses in their coats of arms, rather than by monarchs, for whom the word crown is customarily reserved in formal English, while many languages have no such terminological distinction. Other than a crown, a coronet shows the rank of the respective noble. Hence, in German and Scandinavian languages there is also the term Rangkrone.

For equivalents, both physical and emblematic, in other languages and cultures, see under crown (headgear). 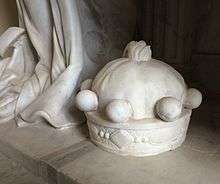 Depiction of a baron's coronet on a 17th-century funerary monument

The main use is now actually not on the head (indeed, many people entitled to a coronet never have one made; the same even applies to some monarchs' crowns, as in Belgium) but as a rank symbol in heraldry, adorning a coat of arms.

In the United Kingdom, a peer wears his or her coronet on one occasion only: for a royal coronation, when it is worn along with coronation robes, equally standardised as a luxurious uniform.

In the peerages of the United Kingdom, the design of a coronet shows the rank of its owner, as in German, French and various other heraldic traditions. Dukes were the first individuals authorised to wear coronets. Marquesses acquired coronets in the 15th century, earls in the 16th and viscounts and barons in the 17th. Until the barons received coronets in 1661, the coronets of earls, marquesses and dukes were engraved while those of viscounts were plain. After 1661, however, viscomital coronets became engraved, while baronial coronets were plain. Coronets may not bear any precious or semi-precious stones.[1]

Since a person entitled to wear a coronet customarily displays it in his or her coat of arms above the shield and below the helm and crest, this can provide a useful clue as to the owner of a given coat of arms. In Canadian heraldry, descendants of the United Empire Loyalists are entitled to use a Loyalist military coronet (for descendants of members of Loyalist regiments) or Loyalist civil coronet (for others) in their arms.

Members of the British Royal Family often have coronets on their coats of arms, and may wear actual coronets at coronations (e.g., Princesses Elizabeth and Margaret at the 1937 coronation of their father as George VI). They were made, according to regulations made by King Charles II in 1661, shortly after his return from exile in France (getting a taste for its lavish court style; Louis XIV started monumental work at Versailles that year) during the Restoration. They vary depending upon the prince's relationship to the monarch. Occasionally, additional royal warrants vary the designs for individuals. The most recent (and most comprehensive) royal warrant concerning coronets was the 19 November 1917 warrant of George V.[2]

Rather than a coronet, the heir apparent receives a crown with a single arch.

There is evidence to support the wearing of coronets amongst Welsh royalty and nobility, particularly in the Kingdom of Gwynedd. Llywelyn's coronet was for a while kept with the English crown jewels.

All over the world, Spanish heraldry has used these crowns and coronets:

This hierarchy among the French nobility, which was identical for non-royal titles to the British hierarchy of peers, should not be understood to be as rigid in the ranking of titleholders as the latter. In particular, title was not a good indication of actual preeminence or precedence: Ancestry, marriages, high office, military rank and the family's historical renown (as documented, e.g., in the Honneurs de la Cour or in Père Anselme's histories of the nobility) counted far more than the precise title. Some distinguished families held no higher title than count or even baron, but were proud of their ancient origin. Moreover, most of the nobility was legally untitled, some hereditary titles could be acquired by a nobleman who purchased a "titled" fief, while titres de courtoisie were freely assumed in the absence of strict regulation by the French crown and became more numerous than titles legally borne. As an example, the title of Marquis ranks in principle immediately after Duke, but was so ridiculed by the late 18th century (cf. the phrase "petit marquis" meaning a presumptuous and vain person) that Napoleon omitted it from his own scale of titles. It should also be noted that, in the 17th and 18th centuries, people assumed and used freely coronets of ranks that they did not have; and, in the 19th and 20th centuries abuse was still made of "courtesy titles". Titles continued to be granted until the Second Empire fell in 1870, and legally survive among their descendants.

The only title that was never usurped under the ancien régime, and rarely without some excuse afterwards, was the title of duc, because it was so often attached to the rank peer of France, which carried specific legal prerogatives such as the right to a seat in the Parlement of Paris. As a result, the title of duc was actually, as well as nominally, at the top of the scale after the royal family and foreign princes, and a cut above all of the other nobility.

Prince: this was not a title in Old Regime France, but a rank, hence there was no coronet.

The Holy Roman Empire, and consequently its successor states (Austria, Germany and others), had a system very similar to that of the British, although the design varied.

Considering the religious nature of the Holy Roman Empire, one can say that, except for the short-lived Napoleonic states, no continental secular system of heraldry historically was so neatly regulated as under the British crown. Still, there are often traditions (often connected to the Holy Roman Empire, e.g., those in Sweden, Denmark or Russia) that include the use of crown and coronets. While most languages do not have a specific term for coronets, but simply use the word meaning crown, it is possible to determine which of those crowns are for peerage or lower-level use, and thus can by analogy be called coronets.

Precisely because there are many traditions and more variation within some of these, there is a plethora of continental coronet types. Indeed, there are also some coronets for positions that do not exist or entitle one to a coronet in the Commonwealth tradition. Such a case in French (ancien, i.e., royal era) heraldry, where coronets of rank did not come into use before the 16th century, is the vidame, whose coronet (illustrated) is a metal circle mounted with three visible crosses (there is no documentary or archeological evidence that such a coronet was ever made).

Often, coronets are substituted by helmets, or only worn on a helmet.

These coronets and crowns were used in Portuguese heraldry: