The Kowloon Motor Bus Company (1933) Limited (KMB; Chinese: 九龍巴士(一九三三)有限公司), is a bus company operating franchised services in Hong Kong, and is the largest bus company in Hong Kong by fleet size and number of bus routes. It is a subsidiary of Transport International Holdings. 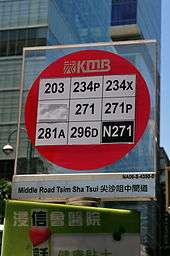 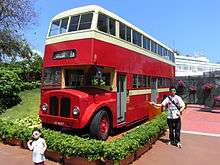 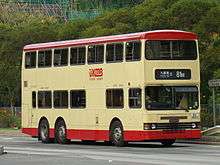 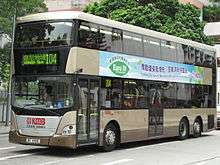 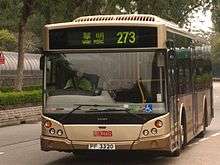 KMB was founded on 13 April 1933 as a result of the reformation of public transport by the Hong Kong Government. Before the reformation, there were several independent bus operators working on both sides of Victoria Harbour including KMB.

The KMB franchise allowed for the operation of public omnibus service on the Kowloon side as well as the New Territories. By 11 June 1933, KMB had a fleet of 106 single-deck buses.

The founding members of KMB were:

By 1940, KMB had 140 single-deckers operating on 17 routes. As only a handful of buses survived World War II, some lorries were temporarily converted into buses. By the late 1940s, KMB ridership increased with the huge influx of immigration from China. In 1949, KMB bought 20 Daimler double-deckers from England, becoming the first operator of double-deckers in Hong Kong.

Following the opening of the Cross Harbour Tunnel in 1972, KMB operated a number of cross-harbour routes jointly with CMB, China Motor Bus, the sole bus operator on Hong Kong Island. This marked the first time KMB buses running on the island.

In the same year, KMB began experimenting with buses operating without a fare collector. All passengers would board from the front door and pay the fare by putting money into the collection box next to the driver.

KMB is the first franchised bus company in Hong Kong that achieved the following:

Passengers pay the fare in cash (no change) or using an Octopus card, a smart card payment system. Discounts apply for Octopus users on specified route interchange combinations.[5][6] On buses with sectional fares, the fare decreases as the bus passes each fare zone.

To enable elderly people and eligible persons with disabilities to travel on the general Mass Transit Railway (MTR) lines, franchised buses and ferries any time at a concessionary fare of $2 per trip, starting from 2012. The Scheme aims to help build a caring and inclusive society by encouraging these groups to participate more in community activities.

The KMB fleet is divided among four depots in Kowloon and the New Territories. The depot of a bus is identified by the letter K, L, S, or U, and the letter is marked on the bottom left of the driver's windscreen or below windscreen. The assignment scheme is as follows:

KMB buses are equipped with state-of-the-art facilities. Newer buses, such as the Alexander Dennis Enviro 500, have colour CCTV cameras installed whereas older buses use a mirror. A bus stop announcement systems is installed on every bus and informs passengers of the next stop. LCD TVs with programmes are also available on most air-conditioned buses, with programmes are provided by RoadShow.

KMB serves 370 routes in Kowloon and the New Territories, and operates cross-harbour tunnel routes in cooperation with the two other bus operators, New World First Bus and Citybus.[3]

Route numbers consist of a number, with an optional letter prefix or suffix. If the digit portion is single- or double-digits, the following scheme is observed:

If the number has three digits, the first digit signifies the service, and the remaining two digits follow the above numbering scheme except as indicated:

On buses with printed plaques, the route number and destination are displayed in white on black for non-cross harbour routes and white on red for cross-harbour routes. Buses using dot-matrix displays do not have special background colours.

The prefix and/or suffix carries additional information about the route:

Route numbers 1 to 99 are unique only within each service area: (1) Hong Kong island, (2) Kowloon and New Territories, (3) Lantau island. All other route numbers are unique within the territory.

KMB has no 5xx (Hong Kong Island, air-conditioned bus routes), 7xx (Express bus using the Island Corridor), or Axx or Exx (service to the airport). Currently KMB does not use Mxx to designate buses serving an Airport Express station.

Kowloon Motor Bus also had a defunct Hong Kong football club, Kowloon Motor Bus Co. It was formed in 1947 and joined Hong Kong First Division League in the 1947/48 season. Nicknamed "Atomic Bus", the team obtained the only two league titles in 1953/54 and 1966/67. The team attained its peak in the 1950s and 1960s when the "South China - Kowloon Motor Bus Co. crash" (南巴大戰) was one of the highlighted rival matches in Hong Kong. In 1970/71, the team faced their first relegation, but was able to stay in the First Division as Jardines quit the league in the following season. However, the team were relegated in 1972/73. It made its last First Division League appearance in 1976/77 bus was relegated after only one season. In 1981, the football team quit the league.