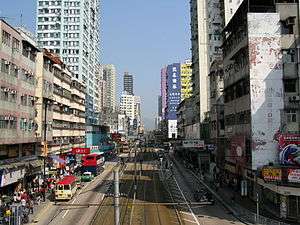 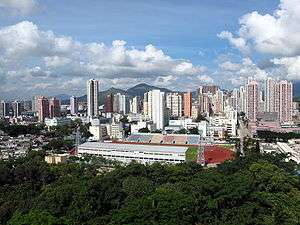 Yuen Long (Chinese: 元朗), formerly Un Long, is an area and town on the Yuen Long Plain located in the New Territories West, Hong Kong. To its west lie Hung Shui Kiu (洪水橋) and Ha Tsuen, to the south Shap Pat Heung and Tai Tong, to the east Au Tau and Kam Tin (錦田), and to the north Nam Sang Wai.

The central part of Yuen Long was traditionally a market town in the area now known as Yuen Long San Hui (元朗新墟), in Yuen Long District in the New Territories West in Hong Kong. The site of the market town was situated centrally with regard to surrounding villages, allowing villagers a convenient location to sell their crops and fish.

The market is a place to allow people from villages in northwest New Territories to shop and trade. Like many market towns in Hong Kong, the market operates only on certain days each week.

Now, the central part of Yuen Long does not have that kind of market anymore. On the contrary, Modern shopping malls and various types of restaurants are established. 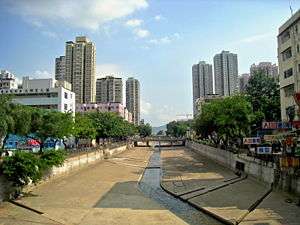 Two new towns have been developed in Yuen Long since the 1970s:

Yuen Long New Town was developed by the market town in the late 1970s and early 1980s.

There are Light Rail Transit and several bus routes serving between the two towns.

The earliest market in Yuen Long was situated south of the main road near Tai Kei Leng. In 1669 the market was moved north to the area near where the present-day MTR station is situated. This was done for political reasons. This area is now known as Yuen Long Kau Hui (元朗舊墟, lit. "old Yuen Long Town"). This market is sited south of a small hill. While it is far from the coast today, it was beside the seashore when the market was first built.

Cheung Shing Street, which separates Nam Pin Wai and Sai Pin Wai, divides the centre of the market. Temples were built for worship and to judge disputes. After the British leased the New Territories in 1898, they built Castle Peak Road to connect major areas of the New Territories and Kowloon. The villagers proposed and moved the market town to the main road. After the Second World War, Yuen Long Town dramatically increased in size, going from a small village into a large town known for its numerous cultural and sporting events.

Due to their proximity to the Shenzhen border in China's Guangdong province, towns in the northern parts of Hong Kong, notably Sheung Shui and Yuen Long, have become hubs for parallel traders who have been buying up large quantities of goods, forcing up local prices and disrupting the daily lives of local citizens.[1][2] Since 2012, there has been a vertiginous increase in Chinese parallel traders arriving in the North District of Hong Kong to re-export infant formula and household products – goods popular with the Chinese – across the border to Shenzhen.[3] Trafficking caused chronic local shortages of milk powder in Hong Kong, which led the government to impose restrictions on the amount of milk powder exports from Hong Kong.[4]

The first anti-parallel trading protest was started at Sheung Shui in September 2012.[5] As government efforts to limit the adverse impact of Chinese trafficking were widely seen as inadequate, there have been further subsequent protests in towns in the North District including Sheung Shui.[6][7] A campaign called Liberate Yuen Long was mounted on 1 March 2015 by localist groups to protest smuggling and parallel trading.

Yuen Long residents are mainly local ethnic Han with a sizable Hoa immigrants, Vietnamese Chinese from the 1970s to 1990s.