Krita is a raster graphics editor based on Qt 5 and the KDE Frameworks 5. Krita is designed to be a digital painting application. It has been influenced to some extent by software like Corel Painter and SAI. Krita packs with some key features different from most of its kind, including the ability to work with both bitmap and vector illustration. The developers also strive to simplify user interaction and focus on features more relevant to painting and drawing.

Krita is a free software distributed under GNU General Public License version 2 and above. It was initially released as a part of KOffice version 1.4.0, on June 21, 2005. 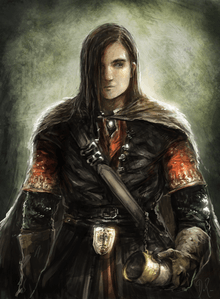 Krita's vision is defined on the official website as:[4] 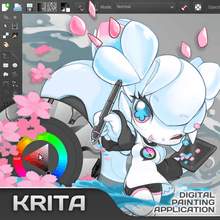 Boxart of Krita on Steam as Feb 2014. The background shows Krita 2.8's default interface, with its signature right-click palette on the bottom left. The character is Kiki the Cyber Squirrel, Krita's mascot.

Krita's mascot is Kiki the Cyber Squirrel, an anthropomorphic squirrel character designed by Tyson Tan. The early version of Kiki was submitted to KDE forum in 2012 and was first used in Krita 2.6's introduction booklet.[5] A revised version was used as Krita 2.8's splash screen,[6][7] as well as the merchandise shop items[8] and Krita's Steam box art, cover art and project avatar.[9][10]

Krita has the following notable features:[11]

Krita's docker system at work. The "Channel" docker has been detached from the right panel and becomes floating. The "Add Shape" docker is being docked into the highlighted area.

Krita has a highly customizable interface designed for desktop and touchscreens. Users may change Krita's window color theme, customize icons shown in toolbars and relocate tool dockers. Keyboard shortcuts can be edited as well. Krita allows user to save a given set of dockers as a workspace and switch between them.

Krita's brush interaction has been designed to simplify the painting process. Users can access many frequently used functions simply by holding down modifiers and apply stylus command. 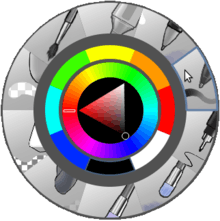 When right-click on the canvas, Krita displays a round palette with frequently used operations, including: 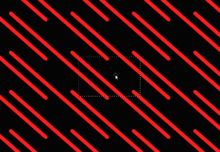 Krita can rotate and mirror its canvas realtime with OpenGL acceleration that supports high-bit depth monitors. It has a large set of options available to create a no-distractions canvas-only painting mode. Krita also has a wrap-around canvas mode (also known as image offset tool) to create seamless textures.

Krita has many raster graphics and vector tools. Each tool has its own tool options. 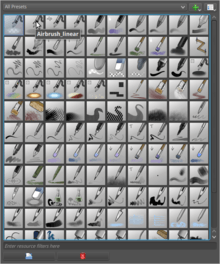 Krita supports filters. The result of a filter can be previewed on the image itself in realtime.

Krita has multiple layer modes including: raster layers, vector layers, filter layers, programmatically generated layers, group layers and file-backed layers. Layers can have transparency, filter and local selection masks. Layers can be dragged and dropped within Krita, between instances of Krita or as images to and from other applications. Layers in Krita can be rotated, scaled, converted, sheared. Krita's vector layers support text, vector shapes and filters on vector shapes.

Krita's generators create pixels and can be used in generator layers. Krita has the following generators: color and pattern. More generators can be added as plugins written in C++.

A "KImage Shop" was proposed by KDE founder Matthias Ettrich on 24 May 1999, following dissatisfaction with the GIMP's user interface.[16] As that name clearly indicates, KImageShop was meant to be a Photoshop clone. Before any public release, it was called KImageShop and then later Krayon, until legal matters motivated a change from these names. As early as 2004 a desire for a change of focus was apparent: "I want Krita to occupy the niche Corel Painter has in the Windows world, not Photoshop."