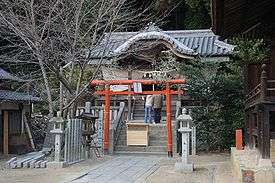 A Kumano shrine in Kurashiki, Okayama

A Kumano shrine (熊野神社, Kumano Jinja) is a type of Shinto shrine which enshrines the three Kumano mountains: Hongū, Shingū, and Nachi (Kumano Gongen (熊野権現)).[1] There are more than 3000 Kumano shrines in Japan, and each has received its kami from another Kumano shrine through a process of propagation called bunrei (分霊) or kanjō (勧請). 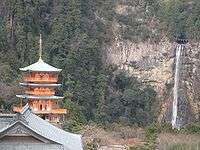 The three Kumano Sanzan shrines are the Sōhonsha ("head shrines") of all Kumano shrines and lie between 20 to 40 km from each other.[2] They are connected to each other by the pilgrimage route known as "Kumano Sankeimichi" (熊野参詣道).[2] The great Kumano Sanzan complex also includes two Buddhist temples, Seiganto-ji and Fudarakusan-ji.[3]

The religious significance of the Kumano region goes back to prehistoric times and therefore predates all modern religions in Japan.[3] The area was, and still is, considered a place of physical healing.[3] Each shrine initially had its own separate form of nature worship, but in the 10th century, under the influence of Buddhism, the three came to be worshiped together as the three deities of Kumano.[3] Because at the time Japanese kami were believed to be emanations of buddhas (honji suijaku theory), the three came to be associated with the Buddhas. Kuniyasutamahime became associated with Avalokiteśvara sahasrabhūja (Senju Kannon, "Thousand-Armed Avalokiteśvara"), Bhaisajyaguru (Yakushi Nyōrai) and Amitābha (Amida Nyōrai).[2][4] The site became, therefore, a unique example of shinbutsu-shūgō or the fusion between Buddhism and Japanese indigenous religion.[3] Thereafter the Kumano Sanzan site attracted many worshipers and became a popular pilgrimage destination.[2] In the 11th century pilgrims were mostly members of the Imperial family or aristocrats, but four centuries later they were mostly commoners.[3] The visit was referred to as the "Kumano ant pilgrimage" (蟻の熊野参り) because they could be seen winding through the valleys like so many ants.