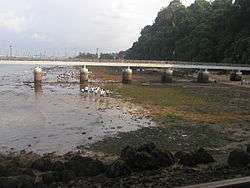 Labrador Nature Reserve (Chinese: 拉柏多自然保护区, Malay: Kawasan Simpanan Alam Semulajadi Labrador), also locally known as Labrador Park (拉柏多公园, Malay: Taman Labrador), is located in the southern part of the main island of Singapore. It contains the only rocky sea-cliff on the mainland that is accessible to the public. Since 2002, 10 hectares of coastal secondary vegetation and its rocky shore have been gazetted as a nature reserve. 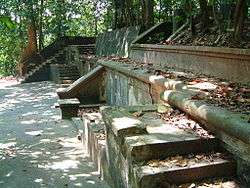 The remains and underground bunkers of the old Fort Pasir Panjang.

Labrador Nature Reserve contains many historical relics from World War II and earlier, left behind by the British. That is because it has a long history, dating back to the 19th century. It also played a significant role in the history of Singapore.

The entire nature reserve, together with the current park, used to be called Pasir Panjang Beach, or Long Beach. The area used to be a long strip of coastal land at high tide, and a rocky beach at low tide, before land reclamation took place, formed the seawalls and grassy park seen today.

There was an old British fort, the Fort Pasir Panjang, located on the hill and cliff next to the sea. The cliff’s high vantage point led the British to identify it as a defence site to protect the entrance to the harbours of Singapore. It became one of nine sites in which the British had set up their batteries, and is part of the British overall defence system for Singapore.

The rocky beach below the cliff was accessible to the public. This area was a popular recreational sport and seaside resort for the residents living in the villas, as well as the villages nearby. In fact, there were even private beach houses, sea walls, and small jetties built along the coast.

In light of the Second Sino-Japanese War raging in the late 1930s, the British conducted a review of the beach defences, showing that Pasir Panjang Beach would be an easy place for the enemy to land. As a result, the land was obtained by the government, and redeveloped into an expansion of Pasir Panjang Fort. Machine gun posts and barbed wire entanglements were built, together with a fence running along the beach. The guns facing the sea were also upgraded. Two six inch 37-ton guns, which could fire 102 lb shells 10 miles, were installed in 1938, together with searchlights that faced the sea.

The British made the beach an “impenetrable fortress”, making it extremely difficult for enemy ships and troops to enter Singapore via that area. It would have proven very useful in combating the enemies.

Alas, the site did not see much action during the war. When the Japanese arrived in Singapore, they, together with their equipment, came from the northern coast, instead of the southern coast which the British expected. No Japanese ships passed through the area at all. As a result, much of the equipment at the fort was put to waste.

The job of the fort then was only to provide a place for shelter and ammunition storage for the British troops. It was also near where the Battle of Pasir Panjang took place.

When the British Armed Forces surrendered to the Japanese in 1942, the equipment at the fort was quickly dismantled, and it was closed down and abandoned. After the occupation was over, the fort remained closed.

A Caltex oil refinery was set up in the area, and a long oil jetty with a pipeline was built. The beach saw few visitors, as being behind a cliff, it was quite inaccessible. It also had few facilities. However, the forest and coast were occasionally visited by nature seekers.

Labrador Beach was also one of the five designated nature reserves established in 1951. This prevented any extensive development which might threaten the flora and fauna, from taking place.

However, in 1973, it was downgraded to that of a nature park. The future of the beach habitat became uncertain, as there were no laws which prevented the destruction of nature parks. It was feared that the area would make way for another industrial site.

There were consistent calls from the public to preserve the rich history and nature of that site, being the last mainland rocky shore and coral reef.

Therefore, on November 2001, it was announced that Labrador Park would be gazetted as a Nature Reserve. The oil refinery’s jetty was renovated and open to the public, together with the rocky shore, while redevelopment and landscaping took place in the reclaimed section of the part, right up to Tanjong Berlayar.

In 2001, two tunnels were also discovered within the park. They were located beneath the old fort, and probably served as a storage of ammunition and supplies, as well as a hideout for British troops. One of the tunnels goes under the sea and leads to Pulau Blakang Mati. Part of the tunnels have now been opened to the public.

More than 70 kinds of birds, including the blue-crowned hanging parrot, the rufous woodpecker and Abbott's babbler, have been seen here. More than 11 species of butterflies have been recorded. In addition, the rocky shore contains a multitude of corals and crabs and more. These include sea grasses, sandworms and horseshoe crabs. The common hairy crab (Pilumnus vespertilio) is often spotted in the area. 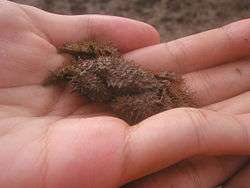 The 300 metre Labrador beach is where marine flora and fauna grow. Plants including sea-grapes, sea-fan and red algae are sources of food for the fauna.

The National Parks Board, National Biodiversity Centre, TeamSeagrass and volunteers from the public regularly conduct surveys and monitoring of the seagrasses found in Singapore, in inter-tidal areas such as Chek Jawa and Pulau Semakau. The seagrass meadow at Labrador Nature Reserve is one of the monitoring sites. These surveys are part of Seagrass-Watch, a global seagrass assessment and monitoring programme spanning 18 countries with more than 200 monitoring sites worldwide. Non-destructive scientific surveying methods developed by Seagrass-Watch are adopted. Data gathered is then fed back to Seagrass-Watch Headquarters, which then analyses the trends and condition of seagrass habitats at the local, regional and global scale.

The National Parks Board, National Biodiversity Centre and the Tropical Marine Science Institute jointly launched a collaborative project to survey and identify the intertidal sponges around Singapore. The inter-tidal area of Labrador Nature Reserve is one of the 24 locations. Although sponges are commonly found on Singapore's shores, they are poorly known due to the limited studies conducted.

Since 8 October 2011, a MRT station,  CC27  Labrador Park, located just beside the park, adds a mode of public transport to the park.

To find out more about the background of Labrador Nature Reserve, the following books can be borrowed from any of the National Libraries in Singapore: