Ladies' Home Journal is an American magazine published by the Meredith Corporation. It first appeared on February 16, 1883,[2] and eventually became one of the leading women's magazines of the 20th century in the United States. It was the first American magazine to reach 1 million subscribers in 1903.[3] On April 24, 2014, Meredith announced it would stop publishing the magazine as a monthly with the July issue, stating it was "transitioning Ladies' Home Journal to a special interest publication".[4] It is now available quarterly on newsstands only, though its website remains in operation.[5]

Ladies' Home Journal was one of the Seven Sisters, a group of women's service magazines.

The Ladies' Home Journal arose from a popular double-page supplement in the American magazine Tribune and Farmer titled Women at Home. Women at Home was written by Louisa Knapp Curtis, wife of the magazine's publisher Cyrus H. K. Curtis.[6] After a year it became an independent publication with Knapp as editor for the first six years. Its original name was The Ladies Home Journal and Practical Housekeeper, but she dropped the last three words in 1886. It rapidly became the leading American magazine of its type, reaching a circulation of more than one million copies in ten years.[3] Edward W. Bok took over the editorship in late 1889 until 1919. Among features he introduced was the popular Ruth Ashmore advice column written by Isabel Mallon.[7] At the turn of the 20th century, the magazine published the work of muckrakers and social reformers such as Jane Addams. In 1901 it published two articles highlighting the early architectural designs of Frank Lloyd Wright.[8][9]

During World War II, it was a particularly favored venue of the government for messages intended for homemakers.[10]

In March 1970, feminists held an 11-hour sit-in at the Ladies' Home Journal's office, which resulted in them getting the opportunity to produce a section of the magazine that August.[11]

The Journal, along with its major rivals, Better Homes and Gardens, Family Circle, Good Housekeeping, McCall's, Redbook and Woman's Day were long known as the "seven sisters".[12] For decades, the Journal had the greatest circulation of this group, but it fell behind McCall's in 1961.[13] In 1968, its circulation was 6.8 million compared to McCall's 8.5 million. That year, Curtis Publishing sold the Ladies' Home Journal, along with the magazine The American Home, to Downe Communications for $5.4 million in stock.[14][15] Between 1969 and 1974 Downe was acquired by Charter Company,[16] which sold the magazine to Family Media Inc., publishers of Health magazine, in 1982 when the company decided to divest its publishing interests. In 1986, the Meredith Corporation acquired the magazine from Family Media for $96 million.[17][18] By 1998, the Journal's circulation had dropped to 4.5 million.[19]

The magazine debuted an extensive visual and editorial redesign in its March 2012 issue. Photographer Brigitte Lacombe was hired to shoot cover photos, with Kate Winslet appearing on the first revamped issue. The Journal announced that portions of its editorial content would be crowdsourced from readers, who would be fairly compensated for their work.[21] The arrangement was one of the first of its kind among major consumer magazines.[22]

Although the magazine remained very popular, it ran into increasing difficulty attracting advertising. Despite its high subscriber base (3.2 million), it was not a leader in the women's service category, and its relatively old readership was not in a demographic favored by advertisers. These factors prompted the decision to end monthly publication.[23] The magazine was relaunched as a quarterly.[23] At the same time, the headquarters of the magazine moved from New York City[24] to Des Moines, Iowa.[23] Meredith offered its subscribers the chance to transfer their subscriptions to Meredith's sister publications.[5]

Knapp continued as the magazine's editor till Edward William Bok succeeded her as LHJ editor in 1889. However, she remained involved with the magazine's management, and she also wrote a column for each issue. In 1892, the LHJ became the first magazine to refuse patent medicine advertisements.[25] In 1896, Bok became Louisa Knapp's son-in-law when he married her daughter, Mary Louise Curtis.

The most famous cooking teacher of her time, Sarah Tyson Rorer, served as LHJ's first food editor from 1897 to 1911,[26] when she moved to Good Housekeeping.

In 1936, Mary Cookman, wife of New York Post editor Joseph Cookman, began working at the Ladies' Home Journal. In time, she was named its Executive Editor, and she remained with LHJ till 1963.[27] She was known throughout most of her career as Mary Bass. Cookman died in 1991.

In 1946, the Journal adopted the slogan, "Never underestimate the power of a woman," which it continues to use today.[28]

The magazine's trademark feature is “Can This Marriage Be Saved?” In this popular column, each person of a couple in a troubled marriage explains their view of the problem, a marriage counselor explains the solutions offered in counseling, and the outcome is published. It was written for 30 years, starting in 1953, by Dorothy D. MacKaye under the name of Dorothy Cameron Disney.[29] MacKaye co-founded this column with Paul Popenoe, a founding practitioner of marriage counseling in the U.S. The two jointly wrote a book of the same title in 1960. Both the book and the column drew their material from the extensive case files of the American Institute of Family Relations in Los Angeles, California.[30] MacKaye died in 1992 at the age of 88. Subsequent writers for the feature have included Lois Duncan and Margery D. Rosen. 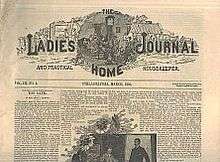 The illustrations of William Ladd Taylor were featured between 1895 and 1926; the magazine also sold reproductions of his works in oil and water-color.[31]