In mathematics, Laplace's equation is a second-order partial differential equation named after Pierre-Simon Laplace who first studied its properties. This is often written as:

is a scalar function.

In three dimensions, the problem is to find twice-differentiable real-valued functions f, of real variables x, y, and z, such that

This is often written as

or, especially in more general contexts,

where ∆ = ∇2 is the Laplace operator or "Laplacian"

If the right-hand side is specified as a given function, h(x, y, z), i.e., if the whole equation is written as

then it is called "Poisson's equation".

The Laplace equation is also a special case of the Helmholtz equation. 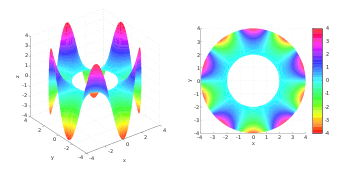 The Dirichlet problem for Laplace's equation consists of finding a solution φ on some domain D such that φ on the boundary of D is equal to some given function. Since the Laplace operator appears in the heat equation, one physical interpretation of this problem is as follows: fix the temperature on the boundary of the domain according to the given specification of the boundary condition. Allow heat to flow until a stationary state is reached in which the temperature at each point on the domain doesn't change anymore. The temperature distribution in the interior will then be given by the solution to the corresponding Dirichlet problem.

The Neumann boundary conditions for Laplace's equation specify not the function φ itself on the boundary of D, but its normal derivative. Physically, this corresponds to the construction of a potential for a vector field whose effect is known at the boundary of D alone.

Solutions of Laplace's equation are called harmonic functions; they are all analytic within the domain where the equation is satisfied. If any two functions are solutions to Laplace's equation (or any linear homogeneous differential equation), their sum (or any linear combination) is also a solution. This property, called the principle of superposition, is very useful, e.g., solutions to complex problems can be constructed by summing simple solutions.

The Laplace equation in two independent variables has the form

The real and imaginary parts of a complex analytic function both satisfy the Laplace equation. That is, if z = x + iy, and if

then the necessary condition that f(z) be analytic is that the Cauchy-Riemann equations be satisfied:

where ux is the first partial derivative of u with respect to x. It follows that

then the Cauchy-Riemann equations will be satisfied if we set

This relation does not determine ψ, but only its increments:

The Laplace equation for φ implies that the integrability condition for ψ is satisfied:

and thus ψ may be defined by a line integral. The integrability condition and Stokes' theorem implies that the value of the line integral connecting two points is independent of the path. The resulting pair of solutions of the Laplace equation are called conjugate harmonic functions. This construction is only valid locally, or provided that the path does not loop around a singularity. For example, if r and θ are polar coordinates and

then a corresponding analytic function is

However, the angle θ is single-valued only in a region that does not enclose the origin.

The close connection between the Laplace equation and analytic functions implies that any solution of the Laplace equation has derivatives of all orders, and can be expanded in a power series, at least inside a circle that does not enclose a singularity. This is in sharp contrast to solutions of the wave equation, which generally have less regularity.

There is an intimate connection between power series and Fourier series. If we expand a function f in a power series inside a circle of radius R, this means that

which is a Fourier series for f. These trigonometric functions can themselves be expanded, using multiple angle formulae.

Let the quantities u and v be the horizontal and vertical components of the velocity field of a steady incompressible, irrotational flow in two dimensions. The condition that the flow be incompressible is that

and the condition that the flow be irrotational is that

If we define the differential of a function ψ by

then the incompressibility condition is the integrability condition for this differential: the resulting function is called the stream function because it is constant along flow lines. The first derivatives of ψ are given by

and the irrotationality condition implies that ψ satisfies the Laplace equation. The harmonic function φ that is conjugate to ψ is called the velocity potential. The Cauchy-Riemann equations imply that

Thus every analytic function corresponds to a steady incompressible, irrotational fluid flow in the plane. The real part is the velocity potential, and the imaginary part is the stream function.

According to Maxwell's equations, an electric field (u,v) in two space dimensions that is independent of time satisfies

where ρ is the charge density. The first Maxwell equation is the integrability condition for the differential

so the electric potential φ may be constructed to satisfy

The second of Maxwell's equations then implies that

which is the Poisson equation. It is important to note that the Laplace equation can be used in three-dimensional problems in electrostatics and fluid flow just as in two dimensions.

where the Dirac delta function δ denotes a unit source concentrated at the point (x′, y′, z′). No function has this property: in fact it is a distribution rather than a function; but it can be thought of as a limit of functions whose integrals over space are unity, and whose support (the region where the function is non-zero) shrinks to a point (see weak solution). It is common to take a different sign convention for this equation than one typically does when defining fundamental solutions. This choice of sign is often convenient to work with because −Δ is a positive operator. The definition of the fundamental solution thus implies that, if the Laplacian of u is integrated over any volume that encloses the source point, then

The Laplace equation is unchanged under a rotation of coordinates, and hence we can expect that a fundamental solution may be obtained among solutions that only depend upon the distance r from the source point. If we choose the volume to be a ball of radius a around the source point, then Gauss' divergence theorem implies that

on a sphere of radius r that is centered on the source point, and hence

Note that, with the opposite sign convention (used in Physics), this is the potential generated by a point particle, for an inverse-square law force, arising in the solution of Poisson equation. A similar argument shows that in two dimensions

where log(r) denotes the natural logarithm. Note that, with the opposite sign convention, this is the potential generated by a pointlike sink (see point particle), which is the solution of the Euler equations in two-dimensional incompressible flow.

A Green's function is a fundamental solution that also satisfies a suitable condition on the boundary S of a volume V. For instance,

Now if u is any solution of the Poisson equation in V:

and u assumes the boundary values g on S, then we may apply Green's identity, (a consequence of the divergence theorem) which states that

The notations un and Gn denote normal derivatives on S. In view of the conditions satisfied by u and G, this result simplifies to

Thus the Green's function describes the influence at (x′, y′, z′) of the data f and g. For the case of the interior of a sphere of radius a, the Green's function may be obtained by means of a reflection (Sommerfeld 1949): the source point P at distance ρ from the center of the sphere is reflected along its radial line to a point P' that is at a distance

where R denotes the distance to the source point P and R' denotes the distance to the reflected point P'. A consequence of this expression for the Green's function is the Poisson integral formula. Let ρ, θ, and φ be spherical coordinates for the source point P. Here θ denotes the angle with the vertical axis, which is contrary to the usual American mathematical notation, but agrees with standard European and physical practice. Then the solution of the Laplace equation with Dirichlet boundary values

inside the sphere is given by

is the cosine of the angle between

In free space the Laplace equation of any electrostatic potential must equal zero since ρ (charge density) is zero in free space.

Taking the divergence of the electrostatic field, we obtain Poisson's equation, that relates charge density and electric potential

In the particular case of the empty space (ρ = 0) Poisson's equation reduces to Laplace's equation for the electric potential.

Using a uniqueness theorem and showing that a potential satisfies Laplace's equation (second derivative of V should be zero i.e. in free space) and the potential has the correct values at the boundaries, the potential is then uniquely defined.

A potential that doesn't satisfy Laplace's equation together with the boundary condition is an invalid electrostatic potential.