For the measure of steepness of a road or other physical feature, see Grade (slope). For a progression between colors, see Color gradient. For rate-of-change of a physical quantity over space, see Spatial gradient. For the similarly spelled unit of angle also known as gon, see Gradian. For other uses, see Gradient (disambiguation).

In the above two images, the values of the function are represented in black and white, black representing higher values, and its corresponding gradient is represented by blue arrows.

The Jacobian is the generalization of the gradient for vector-valued functions of several variables and differentiable maps between Euclidean spaces or, more generally, manifolds. A further generalization for a function between Banach spaces is the Fréchet derivative. 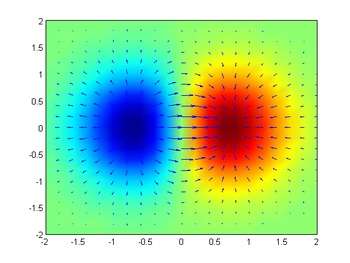 Gradient of the 2D function f(x, y) = xe−(x2 + y2) is plotted as blue arrows over the pseudocolor plot of the function.

Consider a surface whose height above sea level at point (x, y) is H(x, y). The gradient of H at a point is a vector pointing in the direction of the steepest slope or grade at that point. The steepness of the slope at that point is given by the magnitude of the gradient vector. 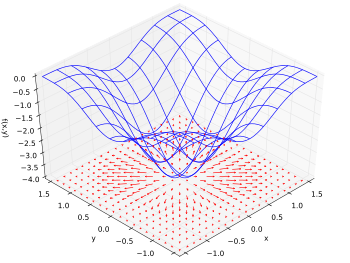 The gradient of the function f(x,y) = −(cos2x + cos2y)2 depicted as a projected vector field on the bottom plane.

The gradient (or gradient vector field) of a scalar function f(x1, x2, x3,... xn) is denoted ∇f or ∇→f where ∇ (the nabla symbol) denotes the vector differential operator, del. The notation grad f is also commonly used for the gradient. The gradient of f is defined as the unique vector field whose dot product with any vector v at each point x is the directional derivative of f along v. That is,

In a rectangular coordinate system, the gradient is the vector field whose components are the partial derivatives of f:

where the ei are the orthogonal unit vectors pointing in the coordinate directions. When a function also depends on a parameter such as time, the gradient often refers simply to the vector of its spatial derivatives only.

In the three-dimensional Cartesian coordinate system, the gradient is given by:

where i, j, k are the standard unit vectors. For example, the gradient of the function

In some applications it is customary to represent the gradient as a row vector or column vector of its components in a rectangular coordinate system.

In cylindrical coordinates, the gradient is given by:[1]

where φ is the azimuthal or azmuth angle, z is the axial coordinate, and eρ, eφ and ez are unit vectors pointing along the coordinate directions.

In spherical coordinates, the gradient is given by:[1]

where φ is the azimuth angle and θ is the zenith angle.

Gradient and the derivative or differential

Linear approximation to a function

The gradient of a function f from the Euclidean space ℝn to ℝ at any particular point x0 in ℝn characterizes the best linear approximation to f at x0. The approximation is as follows:

for x close to x0, where (∇f )x0 is the gradient of f computed at x0, and the dot denotes the dot product on ℝn. This equation is equivalent to the first two terms in the multivariable Taylor series expansion of f at x0.

The best linear approximation to a differentiable function

at a point x in ℝn is a linear map from ℝn to ℝ which is often denoted by dfx or Df(x) and called the differential or (total) derivative of f at x. The gradient is therefore related to the differential by the formula

for any v ∈ ℝn. The function df, which maps x to dfx, is called the differential or exterior derivative of f and is an example of a differential 1-form.

If ℝn is viewed as the space of (dimension n) column vectors (of real numbers), then one can regard df as the row vector with components

so that dfx(v) is given by matrix multiplication. The gradient is then the corresponding column vector, i.e.,

Gradient as a derivative

Let U be an open set in ℝn. If the function f : U → ℝ is differentiable, then the differential of f is the (Fréchet) derivative of f. Thus ∇f is a function from U to the space ℝ such that

where · is the dot product.

As a consequence, the usual properties of the derivative hold for the gradient:

More generally, if instead I ⊂ ℝk, then the following holds:

For the second form of the chain rule, suppose that h : I → ℝ is a real valued function on a subset I of ℝ, and that h is differentiable at the point f(a) ∈ I. Then

A level surface, or isosurface, is the set of all points where some function has a given value.

If f is differentiable, then the dot product (∇f )x ⋅ v of the gradient at a point x with a vector v gives the directional derivative of f at x in the direction v. It follows that in this case the gradient of f is orthogonal to the level sets of f. For example, a level surface in three-dimensional space is defined by an equation of the form F(x, y, z) = c. The gradient of F is then normal to the surface.

More generally, any embedded hypersurface in a Riemannian manifold can be cut out by an equation of the form F(P) = 0 such that dF is nowhere zero. The gradient of F is then normal to the hypersurface.

For any smooth function f on a Riemannian manifold (M,g), the gradient of f is the vector field ∇f such that for any vector field X,

where gx( , ) denotes the inner product of tangent vectors at x defined by the metric g and ∂X f (sometimes denoted X( f )) is the function that takes any point x ∈ M to the directional derivative of f in the direction X, evaluated at x. In other words, in a coordinate chart φ from an open subset of M to an open subset of ℝn, (∂X f )(x) is given by:

where Xj denotes the jth component of X in this coordinate chart.

So, the local form of the gradient takes the form:

Generalizing the case M = ℝn, the gradient of a function is related to its exterior derivative, since

More precisely, the gradient ∇f is the vector field associated to the differential 1-form df using the musical isomorphism

(called "sharp") defined by the metric g. The relation between the exterior derivative and the gradient of a function on ℝn is a special case of this in which the metric is the flat metric given by the dot product.

Gradient of a vector

Since the total derivative of a vector field is a linear mapping from vectors to vectors, it is a tensor quantity.

In rectangular coordinates, the gradient of a vector field f = ( f1, f2, f3) is defined by:

where the Einstein summation notation is used and the product of the vectors ei, ek is a dyadic tensor of type (2,0), or the Jacobian matrix

In curvilinear coordinates, or more generally on a curved manifold, the gradient involves Christoffel symbols:

where gjk are the components of the metric tensor and the ei are the coordinate vectors.

Expressed more invariantly, the gradient of a vector field f can be defined by the Levi-Civita connection and metric tensor:[2]

where ∇c is the connection.