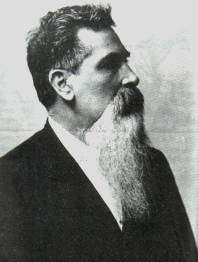 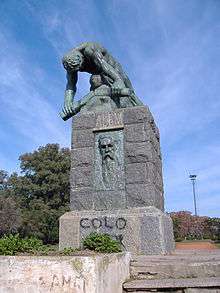 Homage to Leandro N. Alem in the park dedicated to his name in Rosario. The statue symbolizes the motto: "It breaks but it does not bend", an expression of his commitment to principles.

Leandro Nicéforo Alem (born Alen) (11 March 1841 – 1 July 1896) was an Argentine politician, born in Buenos Aires, a founder and leader of the Radical Civic Union. He was also an active Freemason.[1] Alem was the uncle and political teacher of Hipólito Yrigoyen. His father, was the chief of Rosas' political police, the Mazorca. He was executed after the battle of Caseros. The young Leandro changed his surname from Alen to Alem to mitigate associations with him.

In 1859, being only 18 years old, he took part in the battles of Cepeda and Pavón, and in 1865, he joined the war against Paraguay. After this he returned to Buenos Aires to finish his law studies. He had democratic, anti-authoritarian ideas, and in 1868, he joined Adolfo Alsina's Autonomist Party, where he showed a skill for incissive rhetorics in public debates.

Alem was elected diputado (representative) at the provincial legislature of Buenos Aires in 1871. In 1874, he went on to become National Deputy, and then Senator. He opposed the federalization of the city of Buenos Aires, required by the Constitution. When it was passed by the legislature, he resigned to it and became the intellectual leader of a group of discontents that sought to produce changes in Argentine politics. In 1877, he and his friend Aristóbulo del Valle founded the Republican Party.

In 1889, Argentina was within a deep political and economic crisis, worsened by the corruption and abuse of power of President Miguel Juárez Celman. In this context, Alem organized the Civic Union of the Youth, (from which the prominent Radical Civic Union would emerge). In July 1890, Alem was one of the leaders of the Revolución del Parque revolt that forced Juárez Celman to resign. When Vice-President Carlos Pellegrini took charge in his stead, Alem renewed his opposition, lending support to uprisings against the national government in the provinces.

After a failed uprising in 1893, Alem saw many of his supporters leave him. Feeling disappointed and betrayed, he killed himself on 1 July 1896, by shooting himself in his right temple inside a carriage.[2] Today, his remains are buried in the Memorial of the Fallen in the 1890 Revolution, in the La Recoleta Cemetery of Buenos Aires.

There are two cities called Leandro N. Alem in Argentina, one in the province of Misiones and another one in the north-west of Buenos Aires (with the same name as the partido where it belongs). There is also a small town in San Luis with this name.

Parque Alem, one of two large parks in Rosario, Santa Fe, is named after Alem, and has a heroic statue of him, trying to bend a quebracho log, representing the motto of the Radical Civic Union, Se quiebra pero no se dobla ("It breaks but it does not bend", an expression of commitment to principles). The sculptor was Guillermo Gianninazzi.

There is a reference to Alem in the lyrics of a tango milonga called "Milonga del 900" written by Homero Manzi.