San Luis (Spanish pronunciation: [san ˈlwis]) is a province of Argentina located near the geographical center of the country (on the 32° South parallel). Neighboring provinces are, from the north clockwise, La Rioja, Córdoba, La Pampa, Mendoza and San Juan.

The city of San Luis was founded in 1594 by Luis Jufré de Loaysa y Meneses, but was subsequently abandoned. It was refounded by Martín García Óñez de Loyola in 1596 under the name San Luis de Loyola.[2] 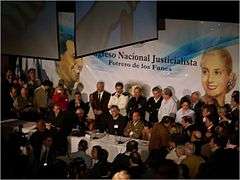 San Luis Justicialist Party officials confer under the images of Juan and Evita Perón. The Rodríguez Saá brothers are seated in the middle.

Politics in San Luis have long been influenced by the descendants of the noted mid-19th century advocate for San Luis's integration into the rest of Argentina, Juan Saá. Since the return of Argentina to democratic rule in 1983, in particular, the Rodríguez Saá family (of Peronist affiliation) has occupied the governor's seat. This situation is, as in many smaller provinces in Argentina (and, indeed, elsewhere), partly explained by the customary use of a combination of nepotism, propaganda and generous social welfare legislation. This includes substantial allegations of illegal pressure, including the violent 1991 harassment of a local journalist and his neighbors.[3] Since 1983, however, Governor (now Senator) Adolfo Rodríguez Saá has also overseen record investment by light manufacturers (mostly food-processors and bottling plants) and advances like the construction of Argentina's most extensive expressway network.[4]

The province has low sierras in the north along the Dry Pampas, and another such system on the west with the Guayaguas, Cantanal, Quijadas and Alto Pencoso Sierras, typical of the Cuyo region.

San Luis' economy has, over the past generation, been among the most improved in Argentina. Its 2006 output, estimated at US$3.386 billion, yielded a per capita income of US$9,203 (somewhat above the national average).[5]

The economic profile of the province changed due to industrial promotion policies implemented since late 1982. Until then, the primary sector (agriculture) was the productive base.

Industrial establishments installed after that year, exhibit great diversification and are mainly in two urban centers: the capital and Villa Mercedes.

Tourism is another of the activities promoted by the San Luis government since the return of democracy in 1983. Currently the province has the largest network of highways in the country, which connects most of the resorts with the provincial capital.

The province is divided into nine departments (departamentos). 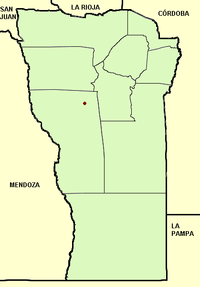 Administrative division (departments) of San Luis and the capital city.