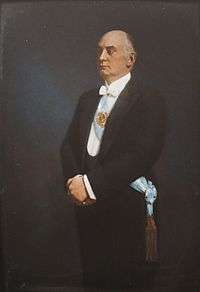 Alvear was the son of Torcuato de Alvear, first Mayor of Buenos Aires. As a young man he was a successful sports shooter, winning an individual bronze and a team gold in the free pistol event in the 1903 World Championship held in Buenos Aires. He would receive a team silver in the 1904 edition in Lyon, France. He was the founder of Argentina's National Olympic Committee. As a politician he became the leader of the anti-personalistic faction of the centrist part of the Radical Civic Union (UCR) co-founded by Yrigoyen, opposed to some of president Hipólito Yrigoyen's policies. In contrast to Yrigoyen's popular style, Alvear belonged to the self-appointed "aristocracy" of Buenos Aires and never tried to hide it. He married opera singer Regina Pacini. In 1917, he was appointed Ambassador to France.

In 1922, Argentina's president Hipólito Yrigoyen designated Alvear to be his successor.[2] During his term, the economy of Argentina reached a peak performance, which would come to an abrupt halt due to the Great Depression shortly after his mandate ended.

After the coup against Yrigoyen on September 6, 1930, Alvear gained control of the party and led the unsuccessful opposition to the conservative governments that followed, including the failed revolution of 1932. As a result, he was arrested and deported to Europe. Securing an agreement to the effect from President Agustín Justo in 1935, Alvear returned to Argentina, whereby he became the UCR's nominee for the presidency. Encouraged by favorable results during mid-term elections in 1936, the UCR ran a vigorous campaign ahead of the 1937 presidential election. Breaking his word to Alvear, President Justo orchestrated what his own party's Governor of the Province of Buenos Aires labeled "one of the most fraudulent elections in history," and the UCR lost to Concordance Party candidate Roberto María Ortiz, the last Argentine President elected via the system of "Patriotic Fraud."