For other uses, see Caddy (disambiguation). 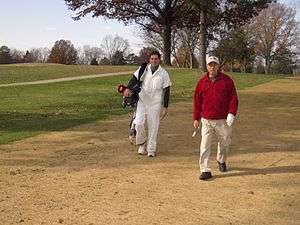 A caddy plies his trade.

In golf, a caddy (or caddie) is the person who carries a player's bag and clubs, and gives insightful advice and moral support. A good caddy is aware of the challenges and obstacles of the golf course being played, along with the best strategy in playing it. This includes knowing overall yardage, pin placements and club selection. A caddy is not usually an employee of a private club or resort. They are classified as an "independent contractor," meaning that he or she is basically self-employed and does not receive any benefits or perks from his association with the club. Some clubs and resorts do have caddy programs, although benefits are rarely offered. Particularly in Europe, the vast majority of clubs do not offer caddies, and amateur players will commonly carry or pull their own bags.

Traditional caddying involves both the golfer and the caddy walking the course. The caddy is in charge of carrying the player’s bag, and walks ahead of the golfer to locate his ball and calculate the yardage to the pin and/or hazards. This is the most common method used in golf clubs and is the only method allowed in the PGA (Professional Golf Association) and LPGA (Ladies Professional Golf Association). The three "ups" of caddying are: show up, shut up, and keep up.

Fore-Caddying entails the caddy walking while the players ride in carts. The fore-caddy will give a hole description and then walk ahead to spot the players tee shots. The caddy then gets the players yardage (either with a laser, course knowledge, or sprinkler heads) while the players drive their carts from the tee to their shots. The caddy walks ahead again to spot the golfers next shots. This process is continued until the players reach the green. Once on the green the caddy will read greens (if asked per proper golf etiquette), clean golf balls (if asked), fix ball marks, and attend the flag. The caddy is also responsible for raking traps on the course. Caddies will help with club selection, reading greens, weather variables, and marking balls on the green but should only do so if asked to by the player. More than anything else, the caddy is there to make the player's round enjoyable by taking care of menial tasks, speeding up play, and providing mental support if asked. 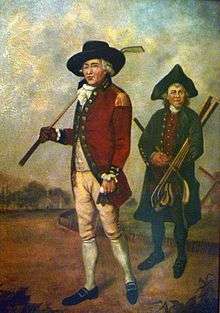 A golf caddy depicted in a late-18th-century painting. Artist unknown.

Many clubs use a ranking system. Caddies will start as a trainee, and be promoted through the ranks of Intermediate, Captain, Honor, and finally Championship. Many courses start their caddies off at the B level, and after a year move them to A, and on their fourth year (if they have earned it), they will receive the title of Honor caddy. The intermediate and captain ranks can usually be obtained within the first year of caddying, and the honor rank is usually obtained in the second or third year of caddying. Championship takes at least 6 years and often as many as 10 years to obtain. An alternative ranking system often used in the American Mid-West proceeds as B level, A level, AA level, Honor level, and Evans Scholar. Caddies often obtain a promotion in rank once a year, while often Honor takes two years to achieve and Evans Scholars are only produced by winning the venerable Evans Scholarship for university. However, in many American clubs, caddies are divided simply between "B" caddies (usually younger, less experienced caddies who often carry only one bag), and "A" caddies (usually older, more experienced caddies who almost always carry two bags).

Caddies are most frequently employed at clubs on weekends, when the majority of country club golf takes place. Some (but usually not as many) opportunities to caddy exist during the week, as well. Additionally, caddies are often allowed to play the course at which they caddy for free, usually on a Monday (the day that most private clubs choose to close their course for maintenance). On pro golf tours, professional caddies accompany their player to all events, which usually take place from Thursday through Sunday. Additionally, the player may hire their caddy to carry their bag for them during training sessions and practice rounds.

At most clubs, caddies are paid at the end of the round by cash, or receive a payment ticket for which they can redeem their wages in the clubhouse. Generally, the player will tip the caddy based on their performance during the round, with extra money given for exemplary work. Most American club caddies earn between $80 and $120 per bag, though newer caddies will often earn less than more experienced caddies. Caddies working during a tournament, high-stakes match, or 4-Day member-guest will often earn significantly more, upwards of $150 per round, per bag, at times. It is common for experienced caddies to carry two bags at a time. It is considered acceptable to ask a professional at the course what the average pay for a caddie is, as courses differ.

In a professional golf tour setting, a player often pays their caddy a percentage of their winnings, which can be as high as 10%. A common pay scale is 5% for making the cut, 7% for a top 10, and 10% for a win. The caddy also usually receives a salary, as the player is not guaranteed to win money at every tournament.