The Catholic Cathedral of Limburg (German: Limburger Dom), also known as Georgsdom in German after its dedication to Saint George, is located above the old town of Limburg in Hesse, Germany. It is the cathedral of the Roman Catholic Diocese of Limburg. Its high location on a rock above the Lahn provides its visibility from far away. The building is one of the most perfect buildings of the late Romanesque style.[1]

When the first church was built above the Lahn on the "Limburger Felsen" (German: "Limburg Rock") is not exactly known. According to a reference in the Nekrolog of the Basilica of St. Castor in Koblenz, Archbishop Hetti of Trier (814-847) consecrated a church of St George in "Lympurgensis."

Incidental archaeological discoveries from Carolingian times under the current church support the existence of a 9th-century church building in the area of the current chapel. There are no actual remains of the building however, nor any indications of its exact location or of its patron saint. Since the aforementioned record of its consecration was first written down in the sixteenth century, its accuracy has been controversial in scholarly literature.

Table tomb of Konrad Kurzbold, now in the northern transept

On 10 February 910, King Louis the Child issued a deed for the foundation of a Stift of canons, which the Gaugraf of Niederlahngau, Konrad Kurzbold (~ 885–948) had pushed for. The construction of a Stift church probably began immediately. The choice of St George as patron is mentioned by Emperor Otto I in a document from the year 940. By then, the church had very likely already been completed.

Remains of this first church building were found under the nave of the current church during excavations in the twentieth century. These suggest that it was a basilica style structure. The nave, with seven arcade openings on square pillars existed at this time; transepts and a rectangular choir came later. An oratorium connected to this structure was probably consecrated in 1058, according to a building inscription, which is preserved in textual sources. The actual inscription no longer exists.

The relationship of this to a lead reliquary from the eleventh century found in 1776 in the late romanesque high altar in the form of a schematic model of a church, is unclear. The piece, which is currently stored in the Domschatz names a Graf Heinrich, whom schlarship has been unable to clearly identify, as founder and builder of a new "templum". 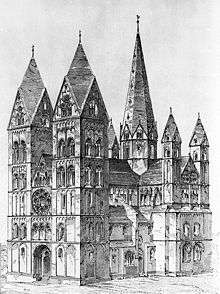 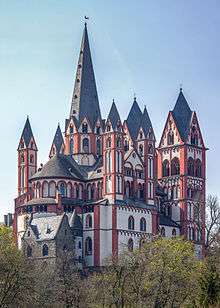 Choir and north side

The date of foundation of the current cathedral is unknown. However, dendrochronology and stylistic factors of the lowest level of the current structure indicate that the beginning of construction should be placed around 1180/90. The consecration was performed in 1235 by Theoderich von Wied, the archbishop of Trier. The patron saints of the church were Saint George and Nicholas of Myra. The builder of the cathedral is no known, but the merchants of Limburg must have played a role.

It seems certain that the cathedral was built in four stages. The first stage encompassed the west facade, the south side aisle, the choir and the transept up to the matroneum. This section forms the Conradine church. The second stage consisted of the addition of the inner pillars of the south nave. In this stage the bound system was first introduced. In the third phase, the matroneum in the southern nave was built. The fourth stage included the north side of the transept and the choir matroneum. By this stage Gothic influence is very clear.

In 1802, during secularisation, the Stift's independence was brought to an end (like many other abbeys and Stifte) and it was given to the Princes of Nassau-Usingen. This seizure took place as part of the German mediatization, in which the House of Nassau received the Stift as compensation for the loss of the County of Saarbrücken on the left bank of the Rhine. After secularisation, the cathedral was used as a parish church. In 1827, at the request of the Duchy of Nassau, the independent Diocese of Limburg was founded. This diocese contained the territory of the Duchy and the free city of Frankfurt am Main. The seat of the bishop was Limburg. At this point the former Stift church of St George was promoted to the rank of cathedral.

The first bishop of Limburg was Jakob Brand (1827 to 1833). The diocese has currently about 700,000 Catholics and is one of the younger dioceses. On Friday, February 2, 2007, Pope Benedict XVI accepted the age-related resignation of former bishop Franz Kamphaus. Franz-Peter Tebartz-van Elst was named new bishop on November 28, 2007, and took office on January 20, 2008. He was suspended on 23 October 2013, the administrator of the diocese has been general vicar Wolfgang Rösch.

The cathedral is a three-aisled basilica, which combines late Romanesque and early Gothic elements. It has a narthex at the western end and a semi-circular choir with an ambulatory. The outside measures 54.5 m long, with a width of 35.4 m. The building has a complicated structure; seven spires rise from it. The number seven is a symbolic reference to the number of the sacraments. The tallest of these towers are on the western side and rise to a height of 37 m. They form the distinctive "twin-tower façade". Such twin-tower facades are common in the Rheinland, for example at Xanten, Andernach and Koblenz. The pointed crossing spire towers over all the other spires with a height of 66 m and stands at the centre of the building. This height is the result of a lightning strike in 1774, before which the tower was 6.5 metres higher. The corner towers on the souther transept were erected in 1863.

The west facade is divided into five levels. The most eye catching stylistic element is a huge round window, surrounded by eight small rosettes, which forms a clear centre of the west facade. The rosette symbolises the four Evangelists. Despite the symmetry of the twin-towers, there is rich variation in forms and building elements, e.g. round and pointed arches, pilaster strips, small pillars, archivolts, windows and blind arches. The upper level of the north tower includes gothic elements (e.g. window tracery).

During restorations between 1872 and 1873, the polychrome exterior painting of the cathedral was removed (the colours were, previously, white, red, yellow-brown, black and a little green) and the stone was left bare. Between 1968 and 1972, the polychrome exterior was restored, using remains of the colour from the period before 1872 in order to reconstruct the old patterns.

The interior of the cathedral (nave and choir) is dominated by the completely undecorated buttresses, which reach all the way to the ceiling. More of the buttress system is hidden in the galleries of the side-aisles. The comparatively plain and bright interior is marked by a narrow, high central nave. It is divided into four levels with arcades, galleries, triforia and clerestories. 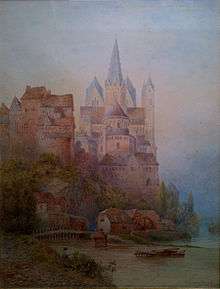 Limburg Cathedral and castle painted by Lewis Pinhorn Wood, when the cathedral was grey

The Limburger Dom on the reverse side of a 1000 DM banknote. 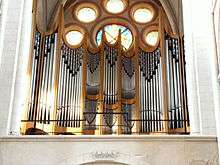 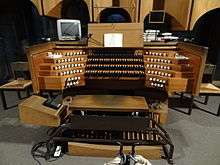 Organ playing is repeatedly documented in the fourteenth century; in 1443 two organs are mentions.[2] After several renovations in the sixteenth and seventeenth centuries, the main organ was broken in 1749 and Johann Christian Köhler created a new organ (1750-1752). A. and M. Keller of Limburg converted the baroque housing to a neo-romanesque style between 1872 and 1877, while retaining Köhler's register. An almost complete rebuild within the neo-romanesque casing was carried out in 1912 by Johannes Klais, a thorough renovation in 1935 and a neo-baroque extension in the neo-baroque style in 1960, by the same organ builder.[3] The current organ was installed in a modern casing in the west gallery by Klais in 1978. The instrument contains over 60 organ stops in four manuals and pedels. The tracker action is mechanical, the register tracking is electrical.[4]

The cathedral's peal consists of nine bells. Seven of them form the main peal and are located in the south tower. Of these, the largest and smallest bell are the remnants of the peal cast in 1906 by the bellfounders Petit & Gebr. Edelbrock of Gescher (a0–c1–d1–e1–g1–a1); they were able to be saved from destruction during the Second World War. In 1949 the other five bells (2-6) were added, which were designed to match the old bells in tone and theme. Only bell number 5 "Konrad Kurzbold" is newly arranged and added to the tone sequence. These seven bells are rung together for Christmas, Epiphany, the Gloria on Maundy Thursday and Easter Vigil, Pentecost, the Feast of St George, the anniversary of the church's consecration and consecration services.[5]

Two old bells hang in the north tower. The larger, called Sterm ("Stormbell") is a sugarloaf bell with neither symbol nor inscription, whose style dates it to 1200-1250. The smaller Uhrglocke ("Hour bell") from the year 1447 originally hung in the uppermost window of the south tower. Since 1986 the two bells have been active once more. The Uhrglocke was made into a baptismal bell and is rung during every baptismal service. In addition, it is part of a special peal at Christmas time and for First Communion. Sterm is rung at Easter masses during Holy Week and for Lauds on Maundy Thursday.[6] The full peal (Tutti) of all nine bells rings before and after the Pontifical High Mass on Easter Sunday.[5]