For the Bach cantata of that title, see Gloria in excelsis Deo, BWV 191. 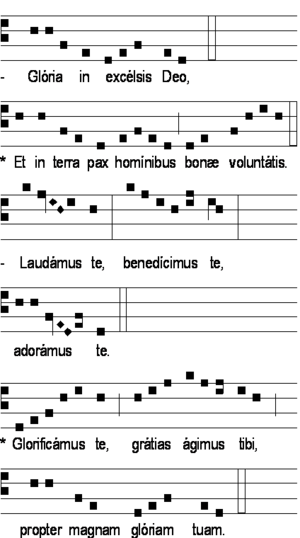 "Gloria in excelsis Deo" (Latin for "Glory to God in the highest") is a Christian hymn known also as the Greater Doxology (as distinguished from the "Minor Doxology" or Gloria Patri) and the Angelic Hymn.[1][2] The name is often abbreviated to Gloria in Excelsis or simply Gloria.

The hymn begins with the words that the angels sang when the birth of Christ was announced to shepherds in Luke 2:14. Other verses were added very early, forming a doxology.[3]

It is an example of the psalmi idiotici ("private psalms", i.e. compositions by individuals in imitation of the biblical Psalter) that were popular in the 2nd and 3rd centuries. Other surviving examples of this lyric poetry are the Te Deum and the Phos Hilaron.[3] In the 4th century it became part of morning prayers, and is still recited in the Byzantine Rite Orthros service.[1]

The Latin translation is traditionally attributed to Saint Hilary of Poitiers (c. 300–368), who may have learned it while in the East (359–360); as such, it is part of a loose tradition of early Latin translations of the scripture known as the Vetus Latina.[3] The Vulgate Latin translation of the Bible was commissioned only in 382.[4] The Latin hymn thus uses the word excelsis to translate the Greek word ὑψίστοις (the highest) in Luke 2:14, not the word altissimis, which Saint Jerome preferred for his translation. 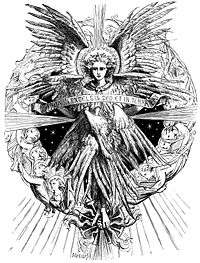 By contrast, in the Roman Rite this hymn is not included in the Liturgy of the Hours, but is sung or recited in the Mass, after the Kyrie, on Sundays outside of Lent and Advent and on solemnities and feasts.[1] In Masses celebrated in the extraordinary form of the Roman Rite using the Roman Missal of 1962, the Gloria is sung much more frequently, with the rubrics requiring that the hymn be sung at any Mass corresponding to the Office of the day in which the Te Deum is said at Matins (i.e., on Sundays outside Advent, Septuagesima, Lent and Passiontide; on ferias of Christmastide and Paschaltide; the feast of a saint or a mystery or event in the life of Christ or the Blessed Virgin), the evening Mass of Maundy Thursday and at the Easter Vigil, at votive Masses of the I, II or III class (unless the priest wears violet vestments), and at IV class votive Masses of the Angels, as well as Masses of the Blessed Virgin on Saturday.[9]

In the Church of England's 1549 edition of the Book of Common Prayer, it was used in the same position as in the Roman Rite but was later moved to the end of the service, immediately before the concluding blessing.[1] Revisions to the Prayer Book occurred in 1552 and 1662, but this placement was retained by the Anglican Communion until the 20th century. The recently published Common Worship provides two Orders one of which places the hymn in the earlier position.

The 1928 United States Episcopal Prayer Book also placed the Gloria at the end of the Eucharist service (like the 1662 Prayer Book). This edition, still the standard in the breakaway Continuing Anglican churches, allowed the hymn to be used in place of the Gloria Patri after the psalms and canticles at Evening Prayer.[1] The Episcopal Church's 1979 Book moved it to the beginning, after or in place of the Kyrie in Rite One. In a Rite Two (i.e., contemporary language) service of Holy Eucharist, the Gloria, or another song of praise, is sung or said on all Sundays except those in Advent or Lent. It may also be used at other times as desired excepting Lent and Advent.

The hymn is also used in the Divine Service of the Lutheran Church and in the services of many other Christian churches.

A tradition recorded in the Liber Pontificalis attributes to Pope Telesphorus (128–139?) the use of the hymn at the Mass of Christmas Day and to Pope Symmachus (498–514) its use on Sundays and the feasts of martyrs, but only by bishops; the right to use it was later extended to priests, at first only at Easter and on the day of their ordination, but by the end of the 11th century priests, as well as bishops, used it in the Mass on Sundays and feasts outside of Lent and Pre-Lent. After the 12th century Advent began to be considered a penitential period in imitation of Lent, to the exclusion therefore of the Gloria in excelsis Deo.[3]

Gloria as section of the Mass ordinary

Glory to God in the highest, and on earth peace to men of good will. We praise You, we bless You, we adore You, we glorify You, we give You thanks for Your great glory,

Lord Jesus Christ, Only-Begotten Son, Lord God, Lamb of God, Son of the Father, Who take away the sins of the world, have mercy on us;

Who take away the sins of the world, hear our prayer. You Who sit at the right hand of the Father, have mercy on us.

In the Tridentine Mass, the priest is instructed, when saying the opening phrase "Gloria in excelsis Deo", to extend his hands and raise them to shoulder height and, at the word "Deo", to join them and bow his head. He is then to continue the recitation standing erect with hands joined and bowing his head to the cross at the words "Adoramus te", "Gratias agimus tibi", "Iesu Christe" (twice), and "Suscipe deprecationem nostram", and at the concluding phrase (as also at the concluding phrase of the Nicene Creed and the Sanctus), to make a large sign of the cross on himself.[10] At High Mass the priest intones the opening phrase, while the deacon and subdeacon stand behind him; then they join him at the altar and together with him quietly recite the rest of the hymn,[11] after which they sit down and wait for the choir to finish its singing of the same text.

The Roman Missal as revised in 1970 simplifies this, saying: "The Gloria is intoned by the priest or, if appropriate, by a cantor or by the choir; but it is sung either by everyone together, or by the people alternately with the choir, or by the choir alone. If not sung, it is to be recited either by all together or by two parts of the congregation responding one to the other."[12] No particular ritual gestures are prescribed.

In the usage of the Eastern Orthodox Church and those Eastern Catholic Churches which follow the Byzantine Rite, the Great Doxology is one of the high points of the festal Matins service. The priest puts on his phelonion (chasuble). When it comes time for the Great Doxology the deacon opens the Holy Doors, and the priest raises his hands orans and exclaims: "Glory to Thee, Who hast shown us the Light!", and the choir begins chanting the Doxology, while all of the oil lamps and candles in the temple are lit. The Great Doxology concludes with the chanting of the Trisagion and leads into the chanting of the Troparion of the Day. If the bishop is present he vests in his full pontifical vestments for the Great Doxology, and the subdeacons stand behind the Holy Table (altar) holding the lit dikirion and trikirion.

When the Lesser Doxology is called for, it is simply said by the reader, the priest does not put on his phelonion, the Holy Doors remain closed and no lamps or candles are lit. The Lesser Doxology does not end with the Trisagion and is followed by an ektenia (litany).

The traditional Orthodox Sunday (Lord's Day) Greek text of the Greater Doxology translated into English has been set for unaccompanied choir by the English composer Clive Strutt as section 12 of his All-night Vigil (2010).

The Gloria has been and still is sung to a wide variety of melodies. Modern scholars have catalogued well over two hundred of them used in the medieval church.[13] The Roman Missal indicates several different plainchant melodies. In addition, several "farced" Glorias were composed in the Middle Ages and were still sung in places when the Roman Missal was revised by order of Pope Pius V in 1570. These expanded the basic Gloria by, for instance, adding to mentions of Jesus Christ a mention of some relationship between him and his mother. The use of these additional phrases in honour of the Blessed Virgin Mary was so common that in editions of the Roman Missal earlier than the 1921 revision, the text of the Gloria was followed by the rubric: "Sic dicitur Gloria in excelsis Deo, etiam in Missis beatæ Mariæ, quando dicenda est" (When the Gloria in excelsis Deo is to be recited, it is recited in this way, even in Masses of Blessed Mary).[14]

There are also many musical settings of translations of the Gloria into various languages.

The Gloria features prominently in the popular song "Silence" by Delerium, a trance song as well as in Gina's and Elvira's theme from the Scarface soundtrack.[16]

Glory be to God on high
And in earth peace, goodwill towards men,

We praise thee, we bless thee,
we worship thee, we glorify thee,
we give thanks to thee, for thy great glory
O Lord God, heavenly King,
God the Father Almighty.

Glory to God in the highest
and peace to his people on earth.
Lord God, heavenly King,
Almighty God and Father,

we worship you, we give you thanks,
we praise you for your glory.

Lord Jesus Christ, only Son of the Father,
Lord God, Lamb of God,
you take away the sin of the world:

have mercy on us;

You are seated at the right hand of the Father:

Jesus Christ,
with the Holy Spirit,
in the glory of God the Father. Amen.

Glory to God in the highest, and on earth peace, goodwill among men.
We praise you, we bless you, we worship you, we glorify you, we give you thanks for your great glory.
Lord, King, God of heaven, Father almighty: Lord, only-begotten Son, Jesus Christ and Holy Spirit.
Lord God, Lamb of God, Son of the Father, who take away the sin of the world, have mercy on us; you take away the sins of the world.
Receive our prayer, you who sit on the right hand of the Father, and have mercy on us.
For you alone are holy, you alone are Lord, Jesus Christ, to the glory of God the Father. Amen.