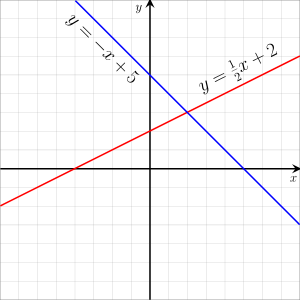 A linear equation is an algebraic equation in which each term is either a constant or the product of a constant and (the first power of) a single variable. A simple example of a linear equation with only one variable, x, may be written in the form: ax + b = 0, where a and b are constants and a ≠ 0. The constants may be numbers, parameters, or even non-linear functions of parameters, and the distinction between variables and parameters may depend on the problem (for an example, see linear regression).

Linear equations can have one or more variables. An example of a linear equation with three variables, x, y, and z, is given by: ax + by + cz + d = 0, where a, b, c, and d are constants and a, b, and c are non-zero. Linear equations occur frequently in most subareas of mathematics and especially in applied mathematics. While they arise quite naturally when modeling many phenomena, they are particularly useful since many non-linear equations may be reduced to linear equations by assuming that quantities of interest vary to only a small extent from some "background" state. An equation is linear if the sum of the exponents of the variables of each term is one.

Equations with exponents greater than one are non-linear. An example of a non-linear equation of two variables is axy + b = 0, where a and b are constants and a ≠ 0. It has two variables, x and y, and is non-linear because the sum of the exponents of the variables in the first term, axy, is two.

This article considers the case of a single equation for which one searches the real solutions. All its content applies for complex solutions and, more generally for linear equations with coefficients and solutions in any field.

A linear equation in one unknown x may always be rewritten

If a ≠ 0, there is a unique solution

If a = 0, then, when b = 0 every number is a solution of the equation, but if b ≠ 0 there are no solutions (and the equation is said to be inconsistent.)

where m and b designate constants (parameters). The origin of the name "linear" comes from the fact that the set of solutions of such an equation forms a straight line in the plane. In this particular equation, the constant m determines the slope or gradient of that line, and the constant term b determines the point at which the line crosses the y-axis, otherwise known as the y-intercept.

Since terms of linear equations cannot contain products of distinct or equal variables, nor any power (other than 1) or other function of a variable, equations involving terms such as xy, x2, y1/3, and sin(x) are nonlinear.

Linear equations can be rewritten using the laws of elementary algebra into several different forms. These equations are often referred to as the "equations of the straight line." In what follows, x, y, t, and θ are variables; other letters represent constants (fixed numbers).

In the general (or standard[1]) form the linear equation is written as:

where A and B are not both equal to zero. The equation is usually written so that A ≥ 0, by convention. The graph of the equation is a straight line, and every straight line can be represented by an equation in the above form. If A is nonzero, then the x-intercept, that is, the x-coordinate of the point where the graph crosses the x-axis (where, y is zero), is C/A. If B is nonzero, then the y-intercept, that is the y-coordinate of the point where the graph crosses the y-axis (where x is zero), is C/B, and the slope of the line is −A/B. The general form is sometimes written as:

where a and b are not both equal to zero. The two versions can be converted from one to the other by moving the constant term to the other side of the equal sign.

where m is the slope of the line and b is the y intercept, which is the y coordinate of the location where the line crosses the y axis. This can be seen by letting x = 0, which immediately gives y = b. It may be helpful to think about this in terms of y = b + mx; where the line passes through the point (0, b) and extends to the left and right at a slope of m. Vertical lines, having undefined slope, cannot be represented by this form.

where m is the slope of the line and (x1,y1) is any point on the line.

Multiplying both sides of this equation by (x2 − x1) yields a form of the line generally referred to as the symmetric form:

Expanding the products and regrouping the terms leads to the general form:

where a and b must be nonzero. The graph of the equation has x-intercept a and y-intercept b. The intercept form is in standard form with A/C = 1/a and B/C = 1/b. Lines that pass through the origin or which are horizontal or vertical violate the nonzero condition on a or b and cannot be represented in this form.

Using the order of the standard form

one can rewrite the equation in matrix form:

Further, this representation extends to systems of linear equations.

Since this extends easily to higher dimensions, it is a common representation in linear algebra, and in computer programming. There are named methods for solving system of linear equations, like Gauss-Jordan which can be expressed as matrix elementary row operations.

The equation of a line can also be written as the determinant of two vectors. If

are unique points on the line, then

will also be a point on the line if the following is true:

To expand on this we can say that

, then the above equation becomes:

Then dividing both side by

would result in the “Two-point form” shown above, but leaving it here allows the equation to still be valid when

This is a special case of the standard form where A = 0 and B = 1, or of the slope-intercept form where the slope m = 0. The graph is a horizontal line with y-intercept equal to b. There is no x-intercept, unless b = 0, in which case the graph of the line is the x-axis, and so every real number is an x-intercept.

This is a special case of the standard form where A = 1 and B = 0. The graph is a vertical line with x-intercept equal to a. The slope is undefined. There is no y-intercept, unless a = 0, in which case the graph of the line is the y-axis, and so every real number is a y-intercept. This is the only type of straight line which is not the graph of a function (it obviously fails the vertical line test).

A linear equation, written in the form y = f(x) whose graph crosses the origin (x,y) = (0,0), that is, whose y-intercept is 0, has the following properties:

where a is any scalar. A function which satisfies these properties is called a linear function (or linear operator, or more generally a linear map). However, linear equations that have non-zero y-intercepts, when written in this manner, produce functions which will have neither property above and hence are not linear functions in this sense. They are known as affine functions.

An everyday example of the use of different forms of linear equations is computation of tax with tax brackets. This is commonly done using either point–slope form or slope–intercept form; see Progressive tax#Computation for details.

If all the coefficients are zero, then either b ≠ 0 and the equation does not have any solution, or b = 0 and every set of values for the unknowns is a solution.

If at least one coefficient is nonzero, a permutation of the subscripts allows to suppose a1 ≠ 0, and rewrite the equation

In other words, if ai ≠ 0, one may choose arbitrary values for all the unknowns except xi, and express xi in term of these values.