For other uses, see Parameter (disambiguation).

A parameter (from the Ancient Greek παρά, para: "beside", "subsidiary"; and μέτρον, metron: "measure"), generally, is any characteristic that can help in defining or classifying a particular system (meaning an event, project, object, situation, etc). That is, a parameter is an element of a system that is useful, or critical, when identifying the system, or when evaluating its performance, status, condition, etc.

Parameter has more specific meanings within various disciplines, including mathematics, computing and computer programming, engineering, statistics, logic and linguistics. Within and across these fields, careful distinction must be maintained of the different usages of the term parameter and of other terms often associated with it, such as argument, property, axiom, variable, function, attribute, etc.[1]

here, the variable x designates the function's argument, but a, b, and c are parameters that determine which particular quadratic function is being considered. A parameter could be incorporated into the function name to indicate its dependence on the parameter. For instance, one may define the base b of a logarithm by

where b is a parameter that indicates which logarithmic function is being used. It is not an argument of the function, and will, for instance, be a constant when considering the derivative

In some informal situations it is a matter of convention (or historical accident) whether some or all of the symbols in a function definition are called parameters. However, changing the status of symbols between parameter and variable changes the function as a mathematical object. For instance, the notation for the falling factorial power

as the most fundamental object being considered, then defining functions with fewer variables from the main one by means of currying.

Sometimes it is useful to consider all functions with certain parameters as parametric family, i.e. as an indexed family of functions. Examples from probability theory are given further below.

[Kilpatrick quoting Woods] "Now ... the engineers ... change the lever arms of the linkage ... the speed of the car ... will still depend on the pedal position ... but in a ... different manner. You have changed a parameter"

In the context of a mathematical model, such as a probability distribution, the distinction between variables and parameters was described by Bard as follows:

We refer to the relations which supposedly describe a certain physical situation, as a model. Typically, a model consists of one or more equations. The quantities appearing in the equations we classify into variables and parameters. The distinction between these is not always clear cut, and it frequently depends on the context in which the variables appear. Usually a model is designed to explain the relationships that exist among quantities which can be measured independently in an experiment; these are the variables of the model. To formulate these relationships, however, one frequently introduces "constants" which stand for inherent properties of nature (or of the materials and equipment used in a given experiment). These are the parameters.[2]

In analytic geometry, curves are often given as the image of some function. The argument of the function is invariably called "the parameter". A circle of radius 1 centered at the origin can be specified in more than one form:

where t is the parameter.

Hence these equations, which might be called functions elsewhere are in analytic geometry characterized as parametric equations and the independent variables are considered as parameters.

In mathematical analysis, integrals dependent on a parameter are often considered. These are of the form

In this formula, t is the argument of the function F, and on the right-hand side the parameter on which the integral depends. When evaluating the integral, t is held constant, and so it is considered to be a parameter. If we are interested in the value of F for different values of t, we then consider t to be a variable. The quantity x is a dummy variable or variable of integration (confusingly, also sometimes called a parameter of integration).

In statistics and econometrics, the probability framework above still holds, but attention shifts to estimating the parameters of a distribution based on observed data, or testing hypotheses about them. In classical estimation these parameters are considered "fixed but unknown", but in Bayesian estimation they are treated as random variables, and their uncertainty is described as a distribution.

It is possible to make statistical inferences without assuming a particular parametric family of probability distributions. In that case, one speaks of non-parametric statistics as opposed to the parametric statistics just described. For example, a test based on Spearman's rank correlation coefficient would be called non-parametric since the statistic is computed from the rank-order of the data disregarding their actual values (and thus regardless of the distribution they were sampled from), whereas those based on the Pearson product-moment correlation coefficient are parametric tests since it is computed directly from the data values and thus estimates the parameter known as the population correlation. 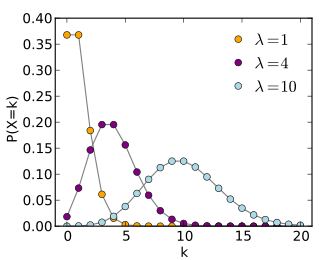 These traces all represent Poisson distributions, but with different values for the parameter λ

This example nicely illustrates the distinction between constants, parameters, and variables. e is Euler's number, a fundamental mathematical constant. The parameter λ is the mean number of observations of some phenomenon in question, a property characteristic of the system. k is a variable, in this case the number of occurrences of the phenomenon actually observed from a particular sample. If we want to know the probability of observing k1 occurrences, we plug it into the function to get

. Without altering the system, we can take multiple samples, which will have a range of values of k, but the system is always characterized by the same λ.

For instance, suppose we have a radioactive sample that emits, on average, five particles every ten minutes. We take measurements of how many particles the sample emits over ten-minute periods. The measurements exhibit different values of k, and if the sample behaves according to Poisson statistics, then each value of k will come up in a proportion given by the probability mass function above. From measurement to measurement, however, λ remains constant at 5. If we do not alter the system, then the parameter λ is unchanged from measurement to measurement; if, on the other hand, we modulate the system by replacing the sample with a more radioactive one, then the parameter λ would increase.

Another common distribution is the normal distribution, which has as parameters the mean μ and the variance σ².

In these above examples, the distributions of the random variables are completely specified by the type of distribution, i.e. Poisson or normal, and the parameter values, i.e. mean and variance. In such a case, we have a parameterized distribution.

It is possible to use the sequence of moments (mean, mean square, ...) or cumulants (mean, variance, ...) as parameters for a probability distribution: see Statistical parameter.

In computer programming, two notions of parameter are commonly used, and are referred to as parameters and arguments—or more formally as a formal parameter and an actual parameter.

For example, in the definition of a function such as

x is the formal parameter (the parameter) of the defined function.

When the function is evaluated for a given value, as in

These concepts are discussed in a more precise way in functional programming and its foundational disciplines, lambda calculus and combinatory logic. Terminology varies between languages; some computer languages such as C define parameter and argument as given here, while Eiffel uses an alternative convention.

The term can also be used in engineering contexts, however, as it is typically used in the physical sciences.

In environmental science and particularly in chemistry and microbiology, a parameter is used to describe a discrete chemical or microbiological entity that can be assigned a value: commonly a concentration, but may also be a logical entity (present or absent), a statistical result such as a 95%ile value or in some cases a subjective value.

Within linguistics, the word "parameter" is almost exclusively used to denote a binary switch in a Universal Grammar within a Principles and Parameters framework.

In music theory, a parameter denotes an element which may be manipulated (composed), separately from the other elements. The term is used particularly for pitch, loudness, duration, and timbre, though theorists or composers have sometimes considered other musical aspects as parameters. The term is particularly used in serial music, where each parameter may follow some specified series. Paul Lansky and George Perle criticized the extension of the word "parameter" to this sense, since it is not closely related to its mathematical sense,[4] but it remains common. The term is also common in music production, as the functions of audio processing units (such as the attack, release, ratio, threshold, and other variables on a compressor) are defined by parameters specific to the type of unit (compressor, equalizer, delay, etc).