Orthodox Churches (those that use the word "Orthodox" in the name) belong mainly to two groups, Eastern Orthodoxy and Oriental Orthodoxy.[1] Apart from these two groups, some other quite unconnected Churches in the West also call themselves Orthodox. An example is the Celtic Orthodox Church.

The various autocephalous and autonomous synods of the Orthodox Church are distinct in terms of administration and local culture, but for the most part exist in full communion with one another. Presently, there are two communions that reject each other and in addition - some schismatic churches not in any communion, all three groups identifying as Eastern Orthodox. The main traditional historical communion are referred to as New Calendarists, who use a Revised Julian Calendar for calculating the feasts of the ecclesiastical year, another group are referred to as True Orthodoxy(also Old Calendarists), they are those who separated from the mainstream, have continued to use the old Julian Calendar claiming that the Calendar reform in 1920s is in contravention of the Ecumenical Councils. Similarly, another group called Old Believers, separated in 1666 from the official Russian Orthodox Church as a protest against church rite reforms introduced by Patriarch Nikon of Moscow. As Eastern Orthodox Christianity is both collegial and local in structure, there is no single organization called the "True Orthodox Church" nor is there official recognition among the "True Orthodox" as to who is properly included among them. While some unions have taken place even up to the present, the majority of True Orthodox are only secondarily concerned with reunion as opposed to preservation of Eastern Orthodox teaching.. The calendar question reflects the dispute between those who wish to synchronize with the modern Gregorian calendar, which its opponents consider unnecessary and damaging to continuity, and those who wish to maintain the traditional ecclesiastical calendar (which happens to be based on the Julian calendar), arguing that such a modern change goes against 1900 years of Church tradition and was in fact perpetrated without an ecumenical council, which would surely have rejected the idea.

The Orthodox Church is a communion of 14 autocephalous (that is, administratively completely independent) regional churches,[2] plus the Orthodox Church in America, which is recognized as autocephalous only by the Russian, Bulgarian, Georgian, Polish, the Czech-Slovak churches. Each has defined geographical boundaries of its jurisdiction and is ruled by its Council of Bishops or Synod presided by a senior bishop – its Primate (or First Hierarch). The Primate may carry the honorary title of Patriarch, Metropolitan (in the Slavic tradition) or Archbishop (in the Greek tradition).

Each regional church consists of constituent eparchies (or, dioceses) ruled by a bishop. Some churches have given an eparchy or group of eparchies varying degrees of autonomy (self-government). Such autonomous churches maintain varying levels of dependence on their mother church, usually defined in a Tomos or other document of autonomy.

Below is a list of the 14 (or 15) autocephalous Orthodox churches, all of which are titled equal to each other, while the Ecumenical Patriarchate is titled first among equals. The list is in their order of precedence (the "canonical order", used internally by the Orthodox Church when listing its component parts), with constituent autonomous churches and exarchates listed below their mother church. The liturgical title of the Primate is listed in italics.

There are unresolved internal issues as to the autonomous or autocephalous status of the following Orthodox churches:

True Orthodoxy separated from the mainstream communion over issues of Ecumenism and Calendar reform since the 1920s.[3] The movement reject the Ecumenical Patriarchate of Constantinople, the Moscow Patriarchate, and those Churches in communion with them, accusing them of heresy and placing themselves under bishops who do the same. They have continued to using of the old Julian Calendar since Antiquity, claiming that the Calendar reform in 1920s is in contravention of the Ecumenical Councils. True Orthodox writers have argued that in missionary areas such as the United States, Orthodox membership numbers may be overstated, with the comparative number of True Orthodox as up to 15% of the Orthodox population. In Russia, it has been claimed by some clergymen that up to a million Russians may be True Orthodox of different jurisdictions, though the total number is often cited at 1.7-2 million together.

Old Believers are groups that do not accept liturgical reforms carried out in the Russian Orthodox Church by Patriarch Nikon in the 17th century. Although all Old Believers groups emerged as a result of opposition to the Nikonian reform, they do not constitute a single monolithic body. Despite the emphasis on invariable adherence to the pre-Nikonian traditions, the Old Believers feature a great diversity of groups that profess different interpretations of the church tradition and often are not in communion with each other (some groups even practise re-baptism before admitting a member of another group into their midst).

Churches with irregular or unresolved canonical status are entities that have carried out episcopal consecrations outside of the norms of canon law or whose bishops have been excommunicated by one of the 14 (or 15) autocephalous churches. These include nationalist and other schisms, and some of them form other communions: 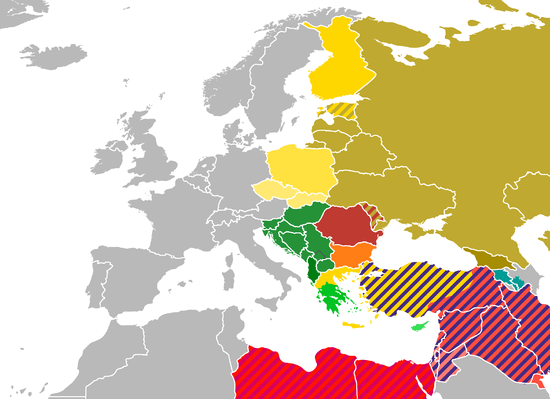 Map of the churches in the Orthodox Communion in Europe and parts of the Middle East. Striped areas indicate where territories overlap each other.

Some small churches in the West use the word "Orthodox" in their titles but are quite distinct from these two families of churches. Examples include the African Orthodox Church and the Celtic Orthodox Church.