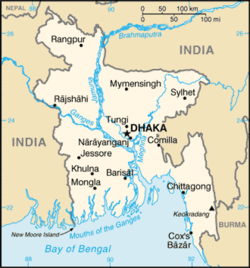 This is a list of airports in Bangladesh, grouped by type and sorted by location. All airports are operated and maintained by the Civil Aviation Authority of Bangladesh.

Bangladesh, officially the People's Republic of Bangladesh, is a country in South Asia. It is bordered by India on all sides except for a small border with Burma (Myanmar) to the far southeast and by the Bay of Bengal to the south. Its capital and largest city is Dhaka.

Bangladesh has 3 international airports, 6 domestic airports and 6 STOL (Short Take-off and Landing) ports, with 1 new domestic airport under construction.[1] It also has several airstrips, some built during World War II.