This page is a list of environmental disasters. In this context it is an annotated list of specific events caused by human activity that results in a negative effect on the environment.

Coordinates of the Industrial Environmental Disasters found on this page, shown in Google. Complete with the Wikipedia descriptions listed below built into each location.

Mushroom-shaped cloud and water column from the underwater nuclear explosion of July 25, 1946, which was part of Operation Crossroads. 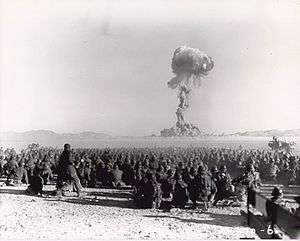