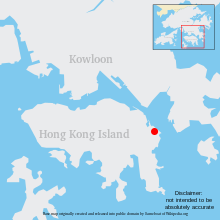 Siu Sai Wan (Chinese: 小西灣) is a newly developed residential area in the northeastern part of Hong Kong Island in Hong Kong. It is located in the eastern part of Chai Wan, and is administratively under the Eastern District. The population was 59,729 in June 2011.[1]

Siu Sai Wan was originally an intelligence gathering centre for the United Kingdom. In 1947, Britain, the United States, Australia, Canada and New Zealand signed an agreement to jointly pursue the gathering of intelligence. The British Armed Forces then set up an intelligence gathering centre in Siu Sai Wan, one of the largest in the Far East, to monitor wireless communications from the then Republic of China (ROC), present-day China (PRC). In 1985, shortly after the handover of Hong Kong to the PRC was agreed, the centre was dismantled.

At the same time, along with the development of the Mass Transit Railway, the resettlement estates in Chai Wan were to be demolished. To accommodate residents from these estates and from the expanding urban population, the government decided to develop Siu Sai Wan. At that time the name Siu Sai Wan was deemed "indecent" by the Government, who suggested to name the area "Siu Chai Wan" instead. This didn't sit well with local residents, and as a result when the Siu Sai Wan Estate was built a few years later, the name Siu Sai Wan was returned to the area. Nevertheless, taxi drivers are known to use a similar-sounding profane term when they refer to the area.

A number of schools including both primary and secondary schools can be found in Siu Sai Wan.

With the Island Resort now constructed, the population of Siu Sai Wan has been steadily increasing, at present, both First Bus and Citybus extended routes end at Chai Wan (East) and Siu Sai Wan Estate and Island Resort.

The government suggested to the MTR Corporation (MTRC) in 2001 that they should consider extending the Island Line to Siu Sai Wan from Chai Wan. In June 2005, the MTRC revealed that they had started planning for the extension.

Only full-time serviced routes are listed above.