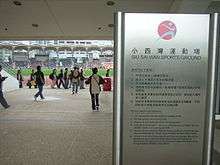 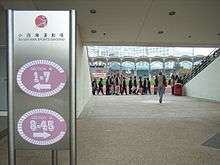 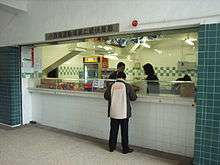 Siu Sai Wan Sports Ground (Chinese: 小西灣運動場) is a multi-purpose stadium in Hong Kong. It is currently used mostly for football matches. It occupies about 43,000 meter square and its construction cost over HK$230 million. Opened in December 1996, the Sports Ground is a concrete structure built on a single level, with a permanent seating capacity of 11,981[1][3]

On 31 March 2004, with the Hong Kong Stadium being readied for the Hong Kong Rugby Sevens, Hong Kong played host to China PR in a 2006 FIFA World Cup qualification game at Siu Sai Wan Sports Ground instead. Hong Kong lost the game to China by 0:1. 9,000 fans attended the game.[6]

On 28 July 2011, Hong Kong will play host to Saudi Arabia in the second round of the 2014 FIFA World Cup qualification. The Hong Kong Stadium is not available due to the hosting of the 2011 Barclays Asia Trophy from 27 to 31 July 2011.

On 4 July 2007, China played against Melbourne Victory at Siu Sai Wan Sports Ground, in preparation for the 2007 AFC Asian Cup. The 90 minutes game was separated into 3 30 minute periods and China won the game 1:0 with a goal from Wang Dong in the second period.[8]

This stadium is located close to the bay and the Island Resort private housing estate.