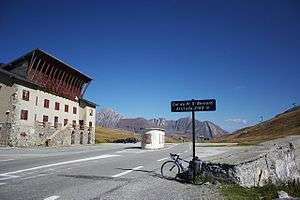 The Little St Bernard Pass (French: Col du Petit Saint-Bernard, Italian: Colle del Piccolo San Bernardo) is a mountain pass in the Alps on the France–Italy border. Its saddle is at 2188 metres above sea level. It is located between Savoie, France, and Aosta Valley, Italy, to the south of the Mont Blanc Massif, exactly on the main alpine watershed. There is also a Great St. Bernard Pass and a San Bernardino Pass. This mountain pass is famous for giving the St Bernard breed its name.

The road across this pass (D1090 from Bourg-Saint-Maurice via La Rosiere in France; SS26 from the Aosta Valley via La Thuile in Italy) is usually open from May to October. For current road status see Etat des principaux cols routiers francais.[1]

At the summit, the road cuts through a stone circle measuring 72 m (236 ft) in diameter. A standing stone once stood in the middle. From coin finds this is believed to date from the Iron Age, possibly being a ceremonial site of the Tarentaisian culture (c. 725 BC–450 BC). The stone circle was partly restored in the 19th century.

In the Roman era, a temple dedicated to Jupiter was erected nearby along with a mansio serving travellers along the pass, and it is thought that Carthaginian general Hannibal used this route.[2][3][4]

For fit cyclists climbing the pass represents an interesting and historic challenge; from Bourg-Saint-Maurice to the south-west, the Col du Petit Saint-Bernard is 26.5 km long. Over this distance, the climb is 1,348 m (4,423 ft) (an average slope of 5.1%), with the steepest sections at 8.1% at the start of the climb. The first 15.5 km (9.6 mi) to La Rosière forms the Montée d'Hauteville climb.

The Little St Bernard Pass was first crossed by the Tour de France in 1949 and has been featured three times since.

In 2007, Montée d'Hauteville was climbed on stage 8 of the Tour de France.

The pass was featured in the 2009 Tour de France Stage 16 on 21 July from Martigny (Switzerland) to Bourg-Saint-Maurice, 160 km, which also features the Great St Bernard Pass.[5]

The climb was Everested on September 2, 2016 by Lee Townend and Katie L'Herpiniere. They made 7 consecutive ascents (covering a total of 361.9 km) on bicycles over the course of 1 day, 1 hour and 33 minutes.