The Italian team had internal problems, because Gino Bartali and Fausto Coppi could both be the team leader. During the selection procedure, Coppi almost refused to start the race, but he was convinced to start. During the race, Coppi almost pulled out, because he felt he did not have full support from the team captain. In the Alps, Coppi recovered. The race was won by Coppi, with second place taken by teammate Bartali, the winner of the previous year. Coppi also won the mountains classification, while his Italian team won the team classification.

The 1949 Tour de France marked the first time that the Tour de France had a stage finish in Spain, when it stopped in San Sebastian in the ninth stage.[1] While the mountains had been categorized into two categories in 1948, in 1949 the third category was added.[2]

As was the custom since the 1930 Tour de France, the 1949 Tour de France was contested by national and regional teams. The three major cycling countries in 1949, Italy, Belgium and France, each sent a team of 12 cyclists. Other countries sent teams of 6 cyclists: Switzerland, Luxembourg, Netherlands and Spain. Italy and Belgium also sent two extra teams of young riders of 6 cyclists each. The French regional cyclists were divided into four teams of 12 cyclists: Ile de France, West-North, Centre-South West and South East. Altogether this made 120 cyclists.[3]

There were 57 French cyclists, 22 Italian, 18 Belgian, 6 Dutch, 6 Luxembourg, 6 Spanish, 6 Swiss and 1 Polish cyclist.[4] In the previous year, Fausto Coppi refused to enter the Tour de France because of personal problems with his team mate Gino Bartali. Bartali had won the previous Tour, and was trying to equal Philippe Thys by winning the Tour three times.[3] Coppi had won the 1949 Giro d'Italia, and wanted to be the first one to achieve the Tour-Giro double in one year. The Italian team manager Alfredo Binda convinced them two weeks before the start of the race to join forces, so both Italians were in the race.[2] 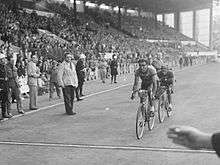 In the early stages, Bartali and Coppi both lost time. Before the fifth stage, Coppi and Bartali both were not in the top fifteen of the general classification.[7]

In that fifth stage, Coppi escaped together with the leader of the general classification, Jacques Marinelli. When they were leading by 6 minutes, Coppi and Marinelli fell in Mouen.[1] Marinelli was not hurt and could continue, but Coppi's bike was broken. The Italian team car offered him a new one, but Coppi refused because he wanted his personal spare bike, and threatened to quit the race.

When Bartali reached Coppi, he saw the problem, and waited. Even later, the Italian team captain Binda arrived with Coppi's spare bike, and Bartali and Coppi started to ride. Coppi started to slow down, complaining he was hungry and exhausted. Bartali decided he could not wait anmore, and rode away from Coppi. Coppi came in 18 minutes late that stage.[7] Later that night, it became clear that Coppi had been angry because the team leader had not been following him, even though he was in the leading group. Coppi did not want to race in a team where Bartali and not he was the leader. Binda tried to convince Coppi that he had been delayed, and he succeeded in keeping Coppi in the race.[7]

In the Alps, Coppi recovered. In the sixteenth stage, Coppi escaped, and only Bartali followed him. It was Bartali's 35th birthday, and Coppi gave Bartali the stage victory.[8] After that stage, Bartali was first in the general classification, with Coppi in second place, 82 seconds behind. In stage 17, Bartali and Coppi again were leading together. Around 40 km into the stage, Bartali punctured. Coppi waited for Bartali, but when Bartali later fell and twisted his ankle, team leader Binda allowed Coppi to take off alone.[1] Coppi did so, won the stage, and decided the race.[9]

The time that each cyclist required to finish each stage was recorded, and these times were added together for the general classification. If a cyclist had received a time bonus, it was subtracted from this total; all time penalties were added to this total. The cyclist with the least accumulated time was the race leader, identified by the yellow jersey. Of the 120 cyclists, 55 finished the race.

The team classification was calculated by adding the times in the general classification of the best three cyclists per team. The Italian Cadets and Switzerland finished with two cyclists each, so they were not eligible for this classification.

The special award for the best regional rider was won by third-placed Jacques Marinelli.[2]