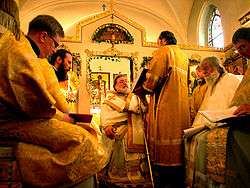 Orthodox bishop, holding his paterissa (crozier), presiding over a celebration of the Liturgy of St. James in Düsseldorf, Germany.

The Liturgy of Saint James or Jacobite Liturgy is the oldest complete form of the Eastern varieties of the Divine Liturgy still in use among certain Christian Churches.

The Liturgy is associated with the name of James the Just, the brother of Jesus and patriarch among the Jewish Christians at Jerusalem. Saint James was martyred at the hands of a mob incensed at his preaching about Jesus and his "transgression of the Law" - an accusation made by the Jewish High Priest of the time, Hanan ben Hanan.

The historic Christian liturgies are divided between Eastern and Western usages. Among the Eastern liturgies, the Liturgy of Saint James is one of the Antiochene group of liturgies, those ascribed to Saint James, to Saint Basil, and to Saint John Chrysostom. Other Eastern liturgies include the Assyrian or Chaldean rites, as well as the Armenian and Maronite rites. The Byzantine liturgies attributed to Saint John Chrysostom and Saint Basil are the ones most widely used today by all Eastern Orthodox Christians and by the Eastern Catholic Churches in communion with Rome.

The Liturgy of Saint James as it presently exists has been brought into conformity with developed Trinitarian Christianity and Eastern Orthodoxy.

The Liturgy of Saint James is considered to be the oldest surviving liturgy developed for general use in the Church. Its date of composition is still disputed, but most authorities propose a fourth-century date for the known form, because the anaphora seems to have been developed from an ancient Egyptian form of the Basilean anaphoric family united with the anaphora described in The Catechisms of St. Cyril of Jerusalem.[1]

The earliest manuscript is the ninth-century codex, Vaticanus graecus 2282, which had been in liturgical use at Damascus, in the diocese of Antioch.

The only critical edition is the one published by Dom B.-Charles Mercier in the Patrologia Orientalis, vol. 26 (1950). 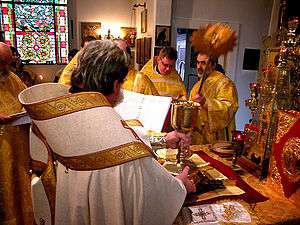 The bishop elevates the chalice while the deacon fans the Gifts with the ripidion.

The Liturgy of St. James is commonly celebrated on the feast day of Saint James (October 23) and the first Sunday after Christmas, and then almost exclusively celebrated on a daily basis in Jerusalem, in the Eastern Orthodox Church. The Liturgy of Saint James is long, taking some hours to complete in full. The recitation of the Divine Liturgy is performed according to the worship rubrics of a particular Rite, with specific parts chanted by the presider, the lectors, the choir, and the congregated faithful, at certain times in unison. Like other compositions in the Byzantine tradition, the Divine Liturgy of St. James as celebrated in Greek forms the basis of the English transcription. In its Syrian form, the Liturgy is still used in the Syriac and Indian Churches - Catholic and Orthodox - both in a Syriac translation and in Malayalam and English.

During the Offertory, the partiture calls for a Cherubic Hymn chanted by readers as the priest brings the gifts to be consecrated onto the altar. In the Latin Church within the Catholic Communion, this composition became popular as a separate hymn of adoration of the Blessed Sacrament, known in English as Let All Mortal Flesh Keep Silence.

The hymnographers of the early Church composed both the words of the sung prayers and the tones of the musical scale to be sung in a single codex for a particular community. The annotation was recorded in close correspondence to the text (for sample codices, see those[2] collated by the North American Greek Orthodox Monastery of St. Anthony in Arizona) with neumes indicating the melodic tones and their duration used before the adoption of the Western system of staff and scales became established in medieval times. In those communities that worship in Syriac the neumes are mirror images of those used by the authocthonous Greek and Cyrillic Orthodox Churches and written and read right to left in accordance with the Syriac script of the prayer texts.

The English Hymnal features the 1906 Ralph Vaughan Williams arrangement of the English verses of the Cherubic hymn of the Offertory chant (see above) to the melody of a French folk tune Picardy. The hymn known as Let All Mortal Flesh Keep Silence is also popular in the Roman Catholic Latin rite as an alternative to the spoken communion antiphon.