For Christians, Jerusalem's role in first century Christianity, during the ministry of Jesus and the Apostolic Age, as recorded in the New Testament, gives it great importance, in addition to its role in the Old Testament, the Hebrew Bible.[1]

Jerusalem in the New Testament and early Christianity

According to the New Testament, Jerusalem was the city to which Jesus was brought as a child, to be presented at the Temple (Luke 2:22) and to attend festivals (Luke 2:41). According to the Canonical gospels, Jesus preached and healed in Jerusalem, especially in the Temple Courts. Jerusalem historian Dan Mazar reported in a series of articles in the Jerusalem Christian Review on the archaeological discoveries made at this location by his grandfather, Prof. Benjamin Mazar, which included the 1st century stairs of ascent, where Jesus and his disciples preached, as well as the "mikvaot" (or baptismals) used by both Jewish and Christian pilgrims. The events of Pentecost, which are recorded in the New Testament Book of Acts, also took place at this location. There is also an account of Jesus' cleansing of the Temple at the Temple Court, chasing various traders out of the sacred precincts (Mark 11:15, see also Mark 11). Much of this area was also uncovered by the excavations conducted by the elder Mazar. At the end of each of the Gospels, there are accounts of Jesus' Last Supper in an "Upper Room" in Jerusalem, his arrest in Gethsemane, his trial, his crucifixion at Golgotha, his burial nearby and his resurrection and ascension and prophecy to return. 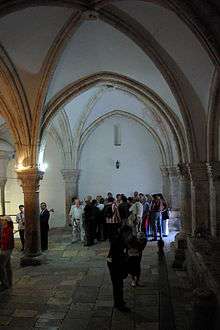 The Cenacle on Mount Zion, claimed to be the location of the Last Supper and Pentecost. Bargil Pixner[2] claims the original Church of the Apostles is located under the current structure. 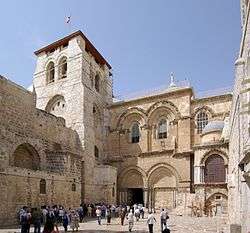 Main entrance to the Church of the Holy Sepulchre.

Tradition holds that the place of the Last Supper is the Cenacle, on the second floor of a building on Mount Zion where David's Tomb is on the first floor. Archaeologist Bargil Pixner[2] claims to have found three walls of the original structure still extant today. The place of Jesus' anguished prayer and betrayal, Gethsemane, is probably somewhere near the Church of All Nations on the Mount of Olives. Jesus' trial before Pontius Pilate may have taken place at the Antonia Fortress, to the north of the Temple area. Popularly, the exterior pavement where the trial was conducted is beneath the Convent of the Sisters of Zion. Other Christians believe that Pilate tried Jesus at Herod's Palace on Mount Zion.

The Via Dolorosa, or way of suffering, is the traditional route to Golgotha, the place of crucifixion, and is an important pilgrimage. The route ends at the Church of the Holy Sepulchre (perhaps the most holy place for Christians). The Holy Sepulchre is traditionally believed to be the location of Golgotha and Jesus' nearby tomb. The original church was built in 336 by Constantine I. The Garden Tomb is a popular pilgrimage site near the Damascus Gate. It was suggested by Charles George Gordon that this site, rather than the Holy Sepulchre, is the true place of Golgotha.

The Church of All Nations near the Mount of Olives.

The Acts of the Apostles and Pauline Epistles show James the Just, the brother of Jesus, as leader of the early Jerusalem church. He and his successors were the focus for Jewish Christians until the destruction of the city by Emperor Hadrian in 135.[3] The exclusion of Jews from the new city of Aelia Capitolina meant that gentile bishops were appointed under the authority of the Metropolitans of Caesarea and, ultimately, the Patriarchs of Antioch. The general significance of Jerusalem to Christians outside the Holy Land entered a period of decline during the Persecution of Christians in the Roman Empire but resumed again c.325 when Emperor Constantine I and his mother, Helena, endowed Jerusalem with churches and shrines, making it the foremost centre of Christian pilgrimage, see also Constantine I and Christianity. Helena is remembered as the Patron Saint of Archaeologists and (according to the church historian Socrates of Constantinople[4]) claimed to have found (with the assistance of Bishop Macarius of Jerusalem) the Cross of Christ, after removing a Temple to Venus that had been built over the site. Jerusalem received special recognition in Canon VII of Nicaea in 325, without yet becoming a metropolitan see.[5] The traditional founding date for the Brotherhood of the Holy Sepulchre (which guards the Christian Holy places in the Holy Land) is 313 which corresponds with the date of the Edict of Milan which legalized Christianity in the Roman Empire. The Council of Chalcedon in 451 raised the Bishop of Jerusalem to the rank of patriarch, together with Rome, Constantinople, Alexandria and Antioch, forming the Pentarchy. However, Byzantine politics meant that Jerusalem simply passed from the Syrian jurisdiction of Antioch to the Greek authorities in Constantinople. For centuries, Greek clergy dominated the Jerusalem church. Meanwhile, the Roman church never accepted the Pentarchy and instead claimed primacy, see Papal supremacy and East–West Schism.

In 638, Sophronius, Patriarch of Jerusalem, handed over the keys of the city to Calif Umar's Muslim forces. The Muslim authorities in Jerusalem were not kind to their Christian subjects, forcing them to live a life of "discrimination, servitude and humiliation."[6] The mistreatment of Christians would only worsen as the armies of the First Crusade approached Jerusalem. Fearing that the Eastern Christians had been conspiring with approaching crusaders, the Muslim authorities of Jerusalem massacred much of the city's Christian population, seeing the fortunate escape the city in terror.[7] While the Crusaders hoped to protect Christian pilgrims who had been attacked and killed by the Turks, to protect the Christian holy places which had been destroyed by Caliph Al-Hakim bi-Amr Allah, and in fact were coming in response to pleas for help from the Eastern Christian Byzantine Emperor Alexios I Komnenos, there is no evidence for any conspiracy.

On 15 July 1099, the army of the First Crusade captured Jerusalem. Most the city's population was killed, with the exception of Eastern Christians. They were, however, exiled from the city, as their new Latin rulers believed they were conspiring with the Muslims.[8] Jerusalem became the capital of a 'Latin Kingdom' with a Latin church and a Latin Patriarch, all under the authority of the Pope. The city's first Latin ruler, Godfrey de Bouillon, was elected in 1099.[9] Out of humility and deference to Jesus, he refused to be called king in a city where he thought only Jesus had the right to be called king; he would only call himself Jerusalem's protector. Throughout his short reign as protector, Godfrey struggled to increase the population of Jerusalem until his death in 1100. In 1100 he was succeeded by his brother Baldwin I who, unlike Godfrey, was willing to take the title of King of Jerusalem. With Jerusalem's population dwindling Baldwin I, as early as 1115, offered the Christians of Transjordan a section of Jerusalem. These Christians were often the target of Muslim aggression and therefore promptly accepted Baldwin's proposal.[10] In 1187, when Saladin captured the city, the Holy Sepulchre and many other churches were returned to the care of Eastern Christians.

From the 17th to the 19th century, various Catholic European nations petitioned the Ottoman Empire for Catholic control of the 'holy places'. The Franciscans are the traditional Catholic custodians of the holy places. Control swung back and forth between the western and eastern churches throughout this period. Sultan Abd-ul-Mejid I (1839–1861), perhaps out of despair, published a firman that laid out in detail the exact rights and responsibility of each community at the Holy Sepulchre. This document became known as the Status Quo, and is still the basis for the complex protocol of the shrine. The Status Quo was upheld by the British Mandate and Jordan. After the 1967 Arab-Israeli War, and the passing of the Old City into Israeli hands, the Knesset passed a law protecting the holy places. Five Christian communities currently have rights in the Holy Sepulchre: the Greek Patriarchate, Latins (Western Rite Roman Catholics), Armenians, Copts and Syriac Orthodox.

The New Jerusalem is the focus of a vision at the end of the Book of Revelation. It is The Perfect City where God lives among his people

Jerusalem in the Old Testament

In the Old Testament, Jerusalem is referred to 669 times and Zion (which usually means Jerusalem, sometimes the Land of Israel) 154 times, while Zion Gadol (large Zion) is only mentioned 11 times. The Pentateuch refers to Moriah as the location of the binding of Isaac, and 2 Chronicles 3:1 connects this to the Temple Mount in Jerusalem.

The book of Psalms, which has been frequently recited and memorized by Jews and Christians for centuries, says:

Jerusalem as an allegory for the Church

In Christianity, Jerusalem is sometimes interpreted as an allegory or type for the Church of Christ. There is a vast apocalyptic tradition that focuses on the heavenly Jerusalem instead of the literal and historical city of Jerusalem. Christians have not controlled the actual city of Jerusalem since the time of the Crusades (except for a brief period in the immediate aftermath of the 1917 Battle of Jerusalem) and have mostly relied on biblical symbols and metaphors that describe the Church as if it were the true living Jerusalem. This view is notably advocated in Augustine's City of God, a popular 5th-century Christian book that was written during the fall of the Western Roman Empire.