The Liturgy of Saint Cyril (or Anaphora of Saint Cyril) is one of the three Anaphoras used at present by the Coptic Orthodox Church and it retains the liturgical peculiarities which have originated in the early Christian Egypt,[1] thus forming the core of the historical Alexandrian Rite. When reference is made to its Greek version, this text is usually known as Liturgy of Saint Mark (or Anaphora of Saint Mark).

This liturgy can be used at present by the Coptic Orthodox Church of Alexandria, as well as by the Coptic Catholic Church, during the Lent time or in the month of Koiak, but its prolongation and particular melodies makes its use uncommon today.[2] This text does not cover the whole Divine Liturgy, extending only from the pre-anaphorical rites (the prayer of the veil) to the distribution of the Communion, thus including the anaphora in the strict sense of the word. The Coptic Liturgy of Saint Basil is used for the remaining part of the service. 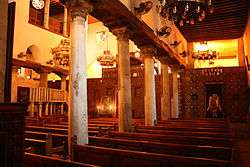 According to liturgical tradition, Christianity was brought in Alexandria in Egypt by Saint Mark. The town then acquired importance as a center of church government and Christian theology with its Catechetical School. The liturgical uses that developed locally are known as thee Alexandrian Rite, and the texts used for the celebration of the Eucharist are known as the Liturgy of Saint Mark.

The lingua franca of the Western world in the early centuries of Christianity was the Koine Greek, and the Liturgy of Saint Mark was in such a language. The translation of this liturgy in Coptic, used by most of Egyptian population at that time, is attributed to Saint Cyril of Alexandria in the first half of the 5th century. Thus the Greek version of this liturgy is usually known as Liturgy of Saint Mark, while its Coptic version is regularly called Liturgy of Saint Cyril, even if the formal name of the latter is "the Anaphora of our holy father Mark the Apostle, which the thrice-blessed Saint Cyril the Archbishop established".[1]

The oldest survived complete manuscripts of both the Liturgy of Saint Mark and of Saint Cyril date the High Middle Ages. From the 5th century to the High Middle Ages both versions developed on parallel and mutually interconnected lines, with reciprocal translations and with most of the additions added to both of them.[4] Both versions have some own peculiar material. The use of the Liturgy of Saint Mark by the Greek Orthodox Church of Alexandria was blamed by the Patriarch of Antioch and canonist Theodore Balsamon at the beginning of the 13th century.[5]

The first millennium witnesses of the early stages of this liturgy are the following fragments:

Other ancient texts which belong to the Alexandrian Rite are important in the study of the development of the Liturgy of Saint Mark: the Anaphora of Serapion is the earlier witness of some ancient material,[8] the Anaphora of Barcelona and the Deir Balyzeh Papyrus are different developments based on the same material, the Cathecheses of Cyril of Jerusalem are useful to trace the relationship with the Liturgy of St. James.

The earlier manuscripts of the Liturgy of Saint Cyril date from the 12th century and are in Bohairic Coptic. It is not known whether they derive directly from the Greek or through lost Sahidic versions. These manuscripts include some additions not found in the Liturgy of Saint Mark in Greek, but in general their readings are closer to the first millennium fragments than those of the Greek version.[1]

The earlier manuscripts of the Liturgy of Saint Mark are: the Codex Rossanensis,[9] the Rotulus Vaticanus,[10] the incomplete Rotulus Messanensis.[11][12] An other witness is the lost manuscript of the library of the Greek Orthodox Church of Alexandria, copied in 1585–6 by Patriarch Meletius Pegas.[13] The Rotulus Vaticanus, and even more the text copied by Pegas, show a progress in the process of assimilation to Byzantine usages.[5]

Structure of the anaphora

The anaphora of Saint Mark (or Saint Cyril) found in the High Middle Ages manuscripts shows all the typical peculiarities of the Alexandrine Rite, such as a long Preface which includes an offering and immediately followed by the intercessions, two epiclesis, the absence of the Benedictus in the Sanctus.[14] The structure of the anaphora (in the strict sense of the word) can be so summarized:

In the present use of the Coptic Orthodox Church, the section containing the Intercessions and the second Oblation has been moved to the end of the anaphora, following the pattern used in the Coptic Liturgies of Saint Basil and Saint Gregory based an Antiochene structure.