Divine Liturgy of the Presanctified Gifts 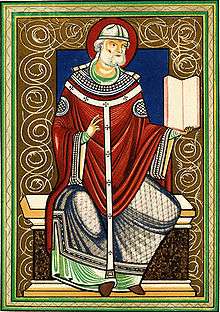 Saint Gregory Dialogus, who is credited with compiling the Divine Liturgy of the Presanctified Gifts.

The Divine Liturgy of the Presanctified Gifts is a Byzantine Rite liturgical service of the Eastern Orthodox Church, also used in the Byzantine Rite of the Catholic Church. It is performed on the weekdays of Great Lent wherein communion is received from Gifts (the Body and Blood of Christ) that are sanctified (consecrated) in advance, hence its name; this Divine Liturgy has no anaphora (eucharistic prayer)

The Presanctified is used on the weekdays of Great Lent, a season of repentance, fasting, and intensified prayer when the more frequent reception of communion is desirable; however, the full Divine Liturgy having a joyful character is not in keeping with the somberness of the season of repentance (Eucharist literally means "thanksgiving") and so the Presanctified is substituted. Although this service may be performed on any weekday (Monday through Friday) of Great Lent, common parish practice is to celebrate it only on Wednesdays, Fridays, and a feast day on which the polyeleos is sung that falls on a weekday. The Typicon also prescribes the Presanctified on the Thursday of the Great Canon (the fifth Thursday of Lent), and on first three days of Holy Week.

The Presanctified Liturgy, aside from having no anaphora (eucharistic prayer) is structured much like other vesperal divine liturgies that are prescribed for strict fast days. After the normal opening of the Liturgy of the Catechumens ("Blessed is the Kingdom ...") vespers proceeds normally until the kathisma, the three stasees (subdivisions) of which are treated as three antiphons with silent prayers of the antiphons analogous to those of the other Divine Liturgies.

If the consecrated Lamb is already on table of prothesis, the priest puts it on the diskos, pours wine and water in the chalice, covers and censes them. Otherwise, during the first antiphon the Lamb is placed on the diskos, which is covered and censed. During he second antiphon, the priest, preceded by a deacon with a lighted candle, processes round the holy table thrice, each time censing it in the form of a cross. During the third antiphon the priest prostrates before the gifts which he then places on his head and carries, preceded by the deacon with lighted candle and censer, to the prothesis table where he censes and covers the gifts and pours wine and water into the chalice which he likewise covers.

The Great Entrance takes place in a manner similar to that of the Divine Liturgy, except that the priest rather than the deacon carries the diskos, he holds it higher than the chalice, and the entrance is made in absolute silence, while everyone makes a full prostration.[4]

When it comes time for Holy Communion, the clergy make their communion as normal, except that no words accompany their drinking from the chalice. Those portions of the reserved Lamb which will be used to give communion to the faithful are placed in unconsecrated wine in the chalice. Local opinion varies as to whether or not this unconsecrated wine must be thought of as the Blood of Christ (even if the bread was intincted). The only practical effect of this variety is that the celebrant (priest or deacon) who must consume all the undistributed communion at the end of the service might or might not partake of the chalice when he communes himself: if the wine that was poured into the chalice is not the Blood of Christ, he would need to consume all of the consecrated elements before drinking any of the wine because drinking unconsecrated wine breaks the Eucharistic fast.

On the previous Sunday, additional Lambs (Hosts) are prepared and consecrated, enough for all of the Presanctified Liturgies that will be celebrated in the coming week. The exact same ceremonies and actions accompany the preparation and consecration of the extra lambs, as the one which will be used that day at the Divine Liturgy. After the consecration, just before the communion of the clergy, the rubric calls for the consecrated Lamb to be intincted with the consecrated Blood of Christ; however, depending on local practice, this is sometimes not done. In either case, the consecrated Lambs are reserved, often in a special pyx used only for this purpose.

The Liturgy of the Presanctified Gifts was first documented by Pope Gregory I (540–604), who had been the papal legate to Constantinople.[5] At one time it was supposed that he had composed the Liturgy himself, but now it is generally supposed that he simply recorded what was otherwise being practiced at Constantinople. In the Presanctified Liturgy itself, he is still commemorated as its traditional author.

This Liturgy is also mentioned in the Canons of the Quinisext Council, of 692 AD:

On all days of the holy fast of Lent, except on the Sabbath [i.e., Saturday], the Lord's Day [Sunday], and the holy day of the Annunciation, the Liturgy of the Presanctified is to be served (Canon 52).[6]

Although the Liturgy of the Presanctified Gifts is associated primarily with the Eastern Orthodox Church and the Byzantine Catholics, it is known in other churches.

In the liturgy of the Roman Catholic Church on Good Friday, there is a similar penitential rite until recently called the Mass of the Presanctified[7] but which is now officially called the rite of Commemoration of the Lord's Passion. Because there is no consecration of the gifts in that liturgy, it is not technically a mass; rather, it is a reception of Holy Communion from the reserved sacrament which was consecrated at mass on Holy Thursday.

In the Anglican Communion, the Book of Common Prayer for the United States provides likewise for the consecration of the reserved sacrament on Maundy Thursday and its reception at the special liturgy of Good Friday.

The Liturgy of the Presanctified Gifts was once used in the West Syrian Rite, the liturgy of the Syriac Orthodox Church, but has fallen into disuse in most of the Syriac Orthodox communion.[8] However, it continues to be used in the Malankara Rite, a variant historically practiced in the Malankara Church of India, and now practiced by the several churches that descended from it.[8] The Divine Liturgy of the Presanctified Gifts is also used at some occasions in the Assyrian Church of the East.

Texts of the liturgy