The Ruthenian Catholic Church, also known in the United States as the Byzantine Catholic Church, is an Eastern Catholic church that uses the Byzantine Rite for its services. It is one of the 23 Eastern Catholic churches that are in full communion with the Holy See. There are two main communities within the church - American and European. In the United States, the Byzantine Catholic Metropolitan Church of Pittsburgh is self-governing (sui iuris). In Europe, Ruthenian Catholics are immediately subject to the Holy See. The European branch has an eparchy in Ukraine (the Eparchy of Mukacheve) and another in the Czech Republic (the Ruthenian Apostolic Exarchate of Czech Republic).

The Ruthenian Catholic Church is rooted among the Rusyn people who lived in Carpathian Ruthenia. This part of the Carpathian Mountains straddles the borders of the present-day states of Hungary, Slovakia and Ukraine. Today, the church is multi-ethnic. Members of the metropolitan province of Pittsburgh are predominantly English-speaking. Most are descendants of Rusyns but the descendants of other nationalities are also present such as Slovaks, Hungarians and Croats as well as those of non-Slavic and non-Eastern European ancestry. The modern Eparchy of Mukacheve in Ukraine is mostly Ukrainian speaking and remains officially part of the greater Ruthenian Church.

The Ruthenian Church originally developed among the Rusyn people living in Carpathian Ruthenia as a result of the missionary outreach of Saints Cyril and Methodius who brought Christianity and the Byzantine Rite to the Slavic peoples in the 9th century. After the separation of the Catholic and Orthodox churches in 1054, the Ruthenian Church retained its Orthodox ties.[1][2]

The invasion of the Magyars in the 10th century later brought Catholic missionary influence to the area. The Rruthenian Prince Daniel of Galicia was crowned by authority of ye Holy See. With the 1646 Union of Uzhhorod, 63 Ruthenian clergy were received into the Catholic Church, and in 1664 a union reached at Mukachevo brought additional communities into the Catholic communion.[2][3] The resulting dioceses retained their Byzantine patrimony and liturgical traditions, and their bishops were elected by a council composed of Basilian monks and eparchial clergy.

After almost a thousand years of Hungarian rule the region became, in part, incorporated in Czechoslovakia after World War I. Annexation to the Soviet Union after the war led to persecution of the Ruthenian Catholic Church.[4] However, since the collapse of Communism the Ruthenian Catholic Church in Eastern Europe has seen a resurgence in numbers of faithful and priests.[5] 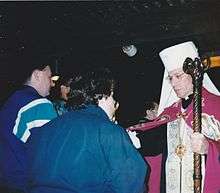 In the 19th and 20th centuries, various Byzantine-Rite Catholics from Austria-Hungary arrived in the United States, particularly in coal mining towns.[1] The predominant Latin Church Catholic hierarchy did not always receive them well, being disturbed in particular at what they saw as the innovation, for the United States, of a married Catholic clergy. At their persistent request, the Sacred Congregation for the Propagation of the Faith applied, on 1 May 1897, to the United States[6] rules already set out in a letter of 2 May 1890 to François-Marie-Benjamin Richard, the Archbishop of Paris.[7] These rules stated that only celibates and widowed priests coming without their children should be permitted in the United States. Dissatisfaction by many Ruthenian Catholics had already given rise to some groups placing themselves under the jurisdiction of what is today the Orthodox Church in America (at that time a mission of the Russian Orthodox Church). The leader of this movement was the widowed Ruthenian Catholic priest Alexis Toth, whose mistreatment by Archbishop John Ireland of Saint Paul, Minnesota, lead to Toth's conversion to Eastern Orthodoxy. He brought with him many Ruthenian Catholic converts, around 20,000 by the time of his death with many who followed afterward, and was canonized a saint by the Orthodox Church in America in 1996.

The situation with Alexis Toth and the Latin Catholic bishops highlighted the need for American Eastern Catholics to have their own bishop. Pope Pius X appointed the Ukrainian bishop Soter Ortynsky in 1907 as bishop for all Slavic Eastern Catholics of the Byzantine rite in America. For this period the Ruthenian Byzantine Catholics were united to the Ukrainian Greek Catholics in the same eparchy. Ethnic tensions flared due to cultural differences (mostly of a political nature) between Ukrainians who came from Austrian ruled Galicia and the Rusyns and other Byzantine Catholics who came from the Kingdom of Hungary. This caused Rome after Ortynsky's death to split the groups by creating a new separate eparchy especially for Byzantine Catholics coming from Hungary - mostly Rusyns but also ethnic Hungarians, Slovaks, and Croats. The Rusyn priest Basil Takach was appointed and on his way to America ordained in Rome as the new eparchy's bishop. Bishop Takach is considered the first bishop of Ruthenian Catholics in America and his appointment as the official founding of the Byzantine Catholic Metropolitan Church of Pittsburgh.

Relations with the Latin Church Catholic hierarchy have improved, especially since the Second Vatican Council, at which the Ruthenian Church influenced decisions regarding using the vernacular (i.e. the language of the people) in the liturgy[8] (Unlike the former custom in the Latin Church, the Ruthenian Church always celebrated the Divine Liturgy in the Church Slavonic language, an ancient Slavic language.) In its decree Orientalium Ecclesiarum the Second Vatican Council declared:

"The Catholic Church holds in high esteem the institutions, liturgical rites, ecclesiastical traditions and the established standards of the Christian life of the Eastern Churches, for in them, distinguished as they are for their venerable antiquity, there remains conspicuous the tradition that has been handed down from the Apostles through the Fathers and that forms part of the divinely revealed and undivided heritage of the universal Church."[9]

The Second Vatican Council urged the Eastern Rite Churches to eliminate liturgical Latinization and to strengthen their Eastern Christian identity. This directive has been met with some success, and the Ruthenian Church is no exception. In June 1999 the Council of Hierarchs of the Byzantine Metropolitan Church Sui Iuris of Pittsburgh U.S.A. promulgated the norms of particular law to govern itself. In January 2007, the Revised Divine Liturgy of St. John Chrysostom and the Revised Divine Liturgy of St. Basil the Great were promulgated. In December 2013, the Pope approved the request of the Congregation for the Eastern Churches that appropriate Eastern Church authorities be granted the faculty to allow pastoral service of Eastern married clergy also outside the traditional Eastern territory.

Membership of the Byzantine (Ruthenian) Catholic Church is not limited to those who trace their heritage to Eastern Europe.

The Ruthenian Church has four eparchies in the United States and one eparchy plus an Apostolic Exarchate in Europe. As of 2010, its membership was estimated at some 646,243 faithful, with seven bishops, 626 parishes, 501 priests, 67 deacons, and 234 men and women religious[10]

One issue preventing organization of the Ruthenian Catholic Church under a single synod is the desire of some of the priests and faithful of the Eparchy of Mukacheve that it should be part of the Ukrainian Greek Catholic Church.[11]