A lower house is one of two chambers of a bicameral legislature, the other chamber being the upper house.[1] 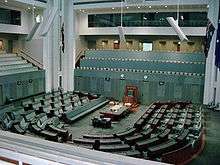 Inside the Australian House of Representatives

Despite its official position "below" the upper house, in many legislatures worldwide, the lower house has come to wield more power.

A legislature composed of only one house is described as unicameral .