For other uses, see Chamber of Deputies.

The Chamber of Deputies (Italian: Camera dei deputati) is a house of the bicameral Parliament of Italy (the other being the Senate of the Republic). The two houses together form a perfect bicameral system, meaning they perform identical functions, but do so separately. Pursuant to article 56 of the Italian Constitution, the Chamber of Deputies has 630 seats, of which 618 are elected from Italian constituencies, and 12 from Italian citizens living abroad. Deputies are styled The Honourable (Italian: Onorevole)[1] and meet at Palazzo Montecitorio. The Chamber and the parliamentary system of the Italian Republic and under the previous Kingdom of Italy is a continuation of the traditions and procedures of the Parliament and Chamber of Deputies as established under King Charles Albert, (1798-1849), during the Revolutions of 1848, and his son Victor Emmanuel II, (1820-1878) of the Kingdom of Sardinia-Piedmont which led in the "Italian unification 'Risorgimento' movement" of the 1850s and 1860s, under the leadership of then Prime Minister, Count Camillo Benso of Cavour ("Count Cavour"). 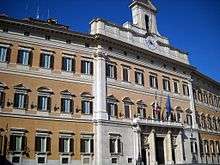 The seat of the Chamber of Deputies is the Palazzo Montecitorio, where it has met since 1871, shortly after the capital of the Kingdom of Italy was moved to Rome at the successful conclusion of the Italian unification Risorgimento movement.

The election of members to the Chamber of Deputies is by voluntary, universal, direct suffrage by all citizens of age on election day. Terms last for a total of five years, unless an early dissolution of the Chamber is called by the President of the Republic (e.g. as a result of parliamentary deadlock), at which point a snap election is held. Unlike the Senate, which requires members to be 40 years of age, members of the Chamber of Deputies may be elected at 25.[2]

The territory of Italy is divided into 100 constituencies electing between 3 and 9 deputies depending on their size. For each constituency, the parties designate a list of candidates: "head of list" candidates can run in up to 10 constituencies, while other candidates are limited to a single constituency. Gender balance is promoted by requiring that, in each region, head of lists of either sex for the same party should not exceed 60% of the total; additionally, candidates in all lists must be in a sequence alternating by gender.

At the first round, electors receive a ballot allowing them to vote for a single party and for its head of list candidate (pre-printed on the ballot), and are given the option to express up to two additional preference votes for other candidates of that party, by writing their name next to the party symbol. If two preference votes are expressed, they must be of a different sex: otherwise, the second preference is discarded.

Only parties passing a 3% minimum threshold in the first round are assigned seats. If the party receiving the plurality of the votes passes a 40% threshold, it is attributed a minimum of 340 seats (54%). The remaining 277 seats are allocated to the other parties proportionally using the largest remainder method, and no second round takes place.

If no party has been able to pass the 40% threshold, a second round takes place two weeks after the first one: this time electors receive a ballot where they are allowed to choose between the two parties that received most votes in the first round. The party winning the second round is attributed 340 seats, and the remaining 277 seats are allocated to the other parties proportionally using the largest remainder method, according to the results of the first round.

Each party receives a certain number of seats depending on its national result: these seats are then projected onto the 100 constituencies and attributed to the candidates of that constituency, starting from the head of list and then according to the number of preference votes.

Article 61 of the Italian Constitution maintains that elections for the Chamber of Deputies must take place within 70 days of the dissolution of house, and that representatives must convene within 20 days of those elections.

Normal operation of the assembly

The term of office of the House (as well as the Senate) is five years, but can be extended in two cases:

The President of Chamber of Deputies has also the role of President during the Parliament joint sessions, when the upper and lower houses have to vote together.

This a list of Presidents of the Italian Chamber of Deputies:

The box below summarizes the distribution of seats in the Italian Chamber of Deputies, following the latest political elections on 24–25 February 2013:

As illustrated by the bars above, the Bersani-led coalition won the plurality in the nationwide election with a 0.4% lead over the nearest coalition, and thus - as defined by the Italian election law - was granted a majority bonus equal to an automatic 55% of the seats in the Chamber of Deputies.