The first known example of a law enforcing age of candidacy was the Lex Villia Annalis, a Roman law enacted in 180 BCE which set the minimum ages for senatorial magistrates.[1] 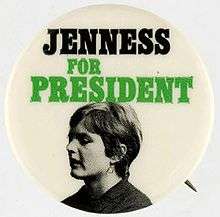 In 1972, Linda Jenness ran for President of the United States although she was only 31 at the time.

Many youth rights groups view current age of candidacy requirements as unjustified age discrimination.[2] Occasionally people who are younger than the minimum age will run for an office in protest of the requirement or because they don't know that the requirement exists. On extremely rare occasions, young people have been elected to offices they do not qualify for and have been deemed ineligible to assume the office.

In 1934, Rush Holt of West Virginia was elected to the Senate of the United States at the age of 29. Since the U.S. Constitution requires senators to be at least 30, Holt was forced to wait until his 30th birthday, six months after the start of the session, before being sworn in.[3]

In 1954, Richard Fulton won election to the Tennessee Senate. Shortly after being sworn in, Fulton was ousted from office because he was only 27 years old at the time. The Tennessee State Constitution required that senators be at least 30.[4] Rather than hold a new election, the previous incumbent, Clifford Allen, was allowed to resume his office for another term. Fulton went on to win the next State Senate election in 1956 and was later elected to the US House of Representatives where he served for 10 years.

In South Carolina, two Senators aged 24 were elected, but were too young according to the State Constitution: Mike Laughlin in 1969 and Bryan Dorn (later a US Congressman) in 1941. They were seated anyway.[5]

During the early 2000s, the British Youth Council and other groups successfully campaigned to lower age of candidacy requirements in the United Kingdom.[9] The age of candidacy was reduced from 21 to 18 in England, Wales and Scotland on 1 January 2007,[10] when section 17 of the Electoral Administration Act 2006 entered into force.[11]

Age of candidacy in various countries

In Australia, any person 18 years of age or older may stand for election to public office at federal, state or local government level.

The youngest ever member of the House of Representatives was 20-year-old Wyatt Roy elected in the 2010 federal election after the Electoral Act 1918 was amended to reduce the age of candidacy for that office from 21 to 18.

In Austria, a person must be 18 years of age or older to stand in elections to the European Parliament or National Council.[12] The Diets of regional Länder are able to set a minimum age lower than 18 for candidacy in elections to the Diet itself as well as to municipal councils in the Land.[13] In presidential elections the candidacy age is 35.

The Brazilian Constitution (Article 14, Section 3 (VI)) defines 35 years as the minimum age for someone to be elected President, Vice-President or Senator; 30 years for state Governor or Vice-Governor; 21 for Federal or State Deputy, Mayor or Vice-Mayor; and 18 for city Councilman.[15]

In Cyprus the minimum age to be elected president is 35 years.

In Denmark, any adult 18 years of age or older can become a candidate and be elected in any public election.

In Estonia, any citizen 18 years of age or older can be elected in local elections, and 21 years or older in parliamentary elections. Minimum age for the President of Estonia is 40.[17]

In France, any citizen 18 years of age or older can be elected to the lower house of Parliament, and 24 years or older for the Senate. The minimum age for the President of France is 18.

In Germany, any citizen 18 years of age or older can be elected in national, regional or local elections. The only exception is the Landtag election in Hesse where a minimum age of 21 is required.[18] Minimum age for the President of Germany is 40 by constitution.

In India a person must be at least:

In Indonesia a person must be at least:

In Israel one must be at least 21 to become a member of the Knesset (Basic Law: The Knesset section 6(a)) or a municipality. When the Prime Minister was directly elected, one must have been a member of the Knesset who is at least 30 to be a candidate for Prime Minister. Every Israeli Citizen (including minors) can be elected as President of Israel, but the role is mostly ceremonial and elected by the Parliament.

In Italy a person must be at least 50 to be President of the Republic, 40 to be a Senator, or 25 to be a Deputy, as specified in the 1947 Constitution of Italy. 18 years of age is sufficient, however, to be elected member of the Council of Regions, Provinces, and Municipalities (Communes).

In Iran a person must be at least 21 years old to run for president.[19]

In Malaysia, any citizen 21 years of age or older can become a candidate and be elected to the Dewan Rakyat and Dewan Undangan Negeri. Minimum age for the Senator is 30. As of 2015, Malaysia is not considering lowering the age of candidacy to 18.

However, since 2015, any citizen not less than 18 years of age and not older than 30 years of age can become a candidate and be elected to the Youth Parliament of Malaysia.

In Mexico a person must be at least 35 to be President, 25 to be a Senator, or 21 to be a Congressional Deputy, as specified in the 1917 Constitution of Mexico.

In the Netherlands, any adult 18 years of age or older can become a candidate and be elected in any public election.

In Nigeria, a person must be at least 40 years of age to be elected President or Vice President, 35 to be a Senator or State Governor, and 30 to be a Representative in parliament.

In Norway, any adult can become a candidate and be elected in any public election, from the calendar year that he or she turns 18 years.

In Pakistan, a person must be at least 40 years old to be President.

Section 47, Clause 1 of the 1996 Constitution of South Africa states that "Every citizen who is qualified to vote for the National Assembly is eligible to be a member of the Assembly", defaulting to Section 46 which "provides for a minimum voting age of 18 years" in National Assembly elections; Sections 106 and 105 provide the same for provincial legislatures.

The 1876 constitution set the age for parliamentary eligibility as 30. This remained unchanged until 13 October 2006, when it was lowered to 25 through a constitutional amendment. The ruling Justice and Development Party proposes to further reduce it to 18, same as the voting age.

The Prime Minister of Turkey has to be a member of the parliament, hence it has the same requirements as parliamentary eligibility. The age of candidacy for the President is 40.

In the UK (other than in Scotland) a person must be aged 18 or over (16 in Scotland) to stand in elections to all parliaments, assemblies, and councils at the European, UK, devolved, or local level. This age requirement also applies in elections to any individual elective public office; the main example is that of an elected mayor, whether of London or a local authority. There are no higher age requirements for particular positions in public office. Candidates are required to be aged 18 on both the day of nomination and the day of the poll. This was reduced from 21 by the Electoral Administration Act 2006.

Main article: Age of candidacy laws in the United States

In the United States, a person must be at least 35 to be President or Vice President, 30 to be a Senator, or 25 to be a Representative, as specified in the U.S. Constitution. Most states in the U.S. also have age requirements for the offices of Governor, State Senator, and State Representative.[29] Some states have a minimum age requirement to hold any elected office (usually 21 or 18).