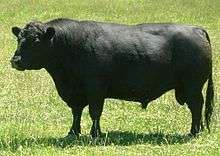 Lowline cattle are a breed of small, polled beef cattle which were developed by breeders in Australia from black Aberdeen Angus cattle.[1] They are small without having a specific dwarfing gene. They are now popular in the United States, used as pets and suitable for showing by children.

Lowline Angus cattle were developed from 1974 by the Trangie Agricultural Research Centre in Australia. The research was on the effects of genetic selection for growth rate to yearling age. Groups of Angus cattle with high and low growth rates were bred separately and compared with a randomly selected control group. These groups were known as "High Line","Low Line" and "Control Line". The original stock were imported from Canada in 1929, with some Scottish and USA animals added in subsequent years. When the experiment ended in 1992 the Lowline herd was sold to private breeders who formed the Australian Lowline Cattle Association (ALCA).[1] Lowline cattle are now bred in Canada, Australia, New Zealand, USA, England and China.[2]

Lowlines may appear to be, but are not, dwarfs. The cattle were specifically selected for these genetic traits. Lowlines are roughly 100 centimetres (three and a half feet) tall and weigh up to 600 kilograms (1300 lbs). They are black in colour and naturally polled. They are claimed to be very docile. Lowlines are noted for their easy calving ability, with calves weighing 25 kg (55 lbs).

Lowline cattle are growing in popularity in countries like the United States, where they are used as locker beef or as docile pets. They are suitable animals for children to halter train and show. Carcases are claimed to have higher dressing percentage than most beef breeds, and marbled meat, with an ability to finish on pasture.