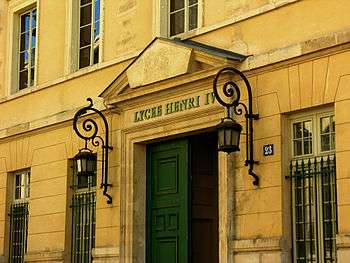 Entrance on the rue Clovis.

The Lycée Henri-IV[1] is a public secondary school located in Paris. Along with Louis-le-Grand it is widely regarded as one of the most demanding sixth-form colleges (lycées) in France.

The school has more than 2,500 students from collège (the first four years of secondary education in France) to classes préparatoires (classes to prepare students for entrance to the elite grandes écoles such as École Polytechnique, École normale supérieure, Centrale Paris, ESSEC Business School or HEC Paris, among others).[1]

Lycée Henri-IV is located in the former royal Abbey of St Genevieve, in the heart of the Latin Quarter on the left bank of the river Seine, near the Panthéon, the church Saint-Étienne-du-Mont, and the rue Mouffetard.[1] Rich in history, architecture and culture, the Latin Quarter contains France's oldest and the most prestigious educational establishments: the École Normale Supérieure, the Sorbonne, the Collège de France and the Lycée Louis-le-Grand.

Today Henri-IV retains many features of the former abbey. The former abbey's library, which had the third-largest collection of books in Europe (transferred to the nearby Bibliothèque Sainte-Geneviève during the 19th century), is composed of four aisles forming a cross with a cupola in the intersection. It is one of the main features of the Lycée with its 18th-century boiseries and pavement as well as a cupola frescoed and carved by the painter Jean II Restout in the 1730s. Two aisles of the library are now used as libraries for Lycée and Classes Préparatoires levels and the two other aisles are used as rooms for conferences and exams. Another highlight is the Salle des médailles (Room of the medals), a long gallery once used as a cabinet of curiosities (a room used to display natural curiosities and artworks). It has richly decorated and carved baroque boiseries and mirrors dating back to the 18th century. The lycée's chapel dates back to the Middle Ages as does the cloister and the Clovis tower, perhaps the lycée's most famous feature. The Salle des Actes displays medieval effigies of the abbey's monks, discovered during restoration in the 1990s. The main staircase, named the escalier de la Vierge (Virgin Mary's staircase), which has a 17th-century statue of the Virgin Mary as its centrepiece, is another striking feature.[1] 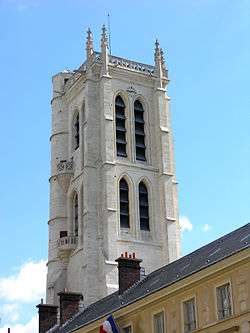