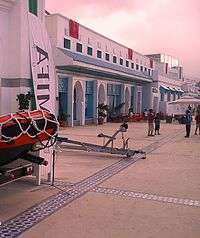 Rincón, M'Diq or Mediek (from the Berber Thaghmath, in Arabic المضيق, meaning the Strait) is a Mediterranean town in Morocco located between Ceuta and Tétouan. It borders Mellaliyine in the south and Alliyene in the west.

SNIM (M'Diq's Sailing Week/Semaine nautique internationale de M'Diq) is one of the most important tourist attractions. It is organised once a year by the M'Diq Royal Yachting Club and sponsored by several commercial firms. It is also significant to all the surrounding socio-cultural activities.

The town's harbour is split into two parts: one for tourism and the other for fishing. Both have been expanded recently in order to improve tourist offerings and to increase the harbour's capacity. In the harbour you can eat fresh fish for relatively little money. M'Diq is a popular weekend destination for residents of nearby Ceuta. Boats up to 50 metres long with a depth of nearly five metres can be moored.[1]