For the district in Madrid, see Tetuán (Madrid). For the city in Tunisia, see Tataouine. 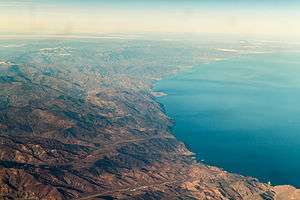 Tétouan (from the Berber ⵜⵉⵟⵟⴰⵡⵉⵏ Tiṭṭawin, Arabic: تطوان‎‎, Spanish: Tetuán, French: Tétouan) is a city in northern Morocco. The Berber name means literally "the eyes" and figuratively "the water springs". Tétouan is one of the two major ports of Morocco on the Mediterranean Sea. It lies a few miles south of the Strait of Gibraltar, and about 40 mi (60 km) E.S.E. of Tangier. In 2014 the city had 463,968 inhabitants (census figure). Tétouan's civil airport Sania Ramel Airport is located 6 km to the east.

Arabic is the official language but it is not used for everyday dialogue. The city has its own dialect,[1][2] a particular citadin variant of non-Hilalian Arabic which is distinct from Jebli Arabic.[3][4] However, Jebli Arabic is predominant since people from the neighboring rural areas settled in the city during the 20th century rural flights.[5] The use of Spanish and French is still widespread especially by the businessmen and intellectual elites due to past colonial ties and geographic location to Europe. The majority religion is Islam; small Christian and Jewish communities also exist. 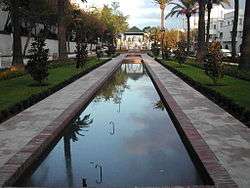 Riad Al Ochak (literally The Lovers' Garden) - a replica of the gardens of Granada, Spain

The city is situated about 60 km east of the city of Tangier and 40 km south of the Spanish exclave of Ceuta (Sebta) and the Strait of Gibraltar. It is in the far north of the Rif Mountains. To the south and west of the city there are mountains. Tetuan is situated in the middle of a belt of orchards that contain orange, almond, pomegranate and cypress trees. The Rif Mountains are nearby, as the city is located in the Martil Valley. It is picturesquely situated on the northern slope of a fertile valley down which flows the Martil river, with the harbour of Tétouan, Martil, at its mouth. Behind rise rugged masses of rock, the southern wall of the Anjera country, once practically closed to Europeans, and across the valley are the hills which form the northern limit of the still more impenetrable Rif.

The streets are fairly wide and straight, and many of the houses belonging to aristocratic families, descendants of those expelled from Al-Andalus by the Spanish Reconquista, possess marble fountains and have groves planted with orange trees. Within the houses the ceilings are often exquisitely carved and painted in hispano-moresque designs, such as are found in the Alhambra of Granada, and the tile-work for which Tetuan is known may be seen on floors, pillars and dados. The traditional industries are tilework, inlaying with silver wire, and the manufacture of thick-soled yellow slippers, much-esteemed flintlocks, and artistic towels used as cape and skirt by Arabic girls in rural areas. The Jews lived in a mellah, separated from the rest of the town by gates which were closed at night. The harbour of Tetuan was obstructed by a bar, over which only small vessels can pass, and the roadstead, sheltered to the north, Northwest and south, is exposed to the east, and is at times unsafe in consequence of the strong Levanter.

A few miles outside of the city limits lies the ancient town of Tamuda. Artifacts from both the Roman and the Phoenician era have been found in the site of Tamuda.[6][7]

Before its foundation in the late 13th century, small fortifications existed here with the name Tittawin.[8] Its name is first mentioned in 9th century Arabic chronicles, after the death of Idris II.[9]

In 1286 the Marinids built a casbah and mosque there. The first large scale building project took place in 1305 when the settlement was expanded by the Marinid king Abu Thabit.[10] He fortified the place and had it serve as a base for attacks on Ceuta, which had recently come under the rule of a rebellious member of the Marinid family. The official name of the Marinid city was 'Afrag' ('(royal) tent' in Berber). Unofficial documents kept referring to it as Tétouan. Around 1400 it was destroyed by the Castilians, because pirates used it for their attacks. By the end of the 15th century it was rebuilt by refugees from the Reconquista (reconquest of Spain, completed by the fall of Granada in 1492), when the Andalusian Moors first reared the walls and then filled the enclosure with houses. These Andalusians came into conflict with the Beni Hozmar tribe, after which they asked the Wattasid sultan for protection. In response, he sent 80 soldiers (according to one chronicle, 40 natives of Fes and 40 Riffians). In turn, the Andalusians paid a large amount of mithqal, thus insuring their autonomy. Instantly, the Andalusians, assisted by tribes from the surrounding mountains, started harassing the Spanish possessions on the Moroccan coast. These attacks led to the destruction of the city's harbor by the Spanish in 1565.

In the late 17th century the city was taken by the Alaouite sultan Moulay Ismail, who encountered fierce resistance there. Tétouan remained fragile, until it was taken by Ahmad al-Riffi, the Alaouite governor of Tangiers and leader of the Berber Riffian tribes that had conquered Tangiers from the British. This al-Riffi ushered in a period of stability in Tétouan, building many of Tétouan's landmarks (for instance the Meshwar palace and the Basha mosque, the oldest still standing mosque in Tétouan). After his death, the city again rebelled and was only nominally controlled by the central government.

In 1790 a pogrom happened, started by Sultan Yazid. The mellah was pillaged and many women raped.[11]

It had a reputation for piracy at various times in its history, and in 1829, the Austrians punitively bombarded the city due to Moroccan piracy.[12] It was taken on 4 February 1860 by the Spaniards under General The 1st Conde de Lucena (a descendant of an old Irish royal family, the O'Donnells of Tyrconnell), who was made hereditary Duque de Tetuán, and later served as Prime Minister of Spain. However, the Spanish evacuated on 2 May 1862.

In 1913 it became the capital of the Spanish protectorate of Morocco, which was governed by the Jalifa (Moroccan prince, serving as Viceroy for the Sultan), and the Spanish "Alto Comisario" accredited to him, and it remained its capital until 1956.

Many people in the city still speak Spanish. On road signs often names are written both in Spanish and in Arabic, though many signs are in Arabic and French, the second language of modern Morocco.

Tétouan has also been home to an important Sephardi Jewish community, which immigrated from Spain after the Reconquista and the Spanish Inquisition. This Jewish Sephardi community spoke a form of Judaeo-Spanish known as Haketia. Some of them emigrated later to Oran (in Algeria), to South America and much later to Israel, Spain, France and Canada. Following the exodus of Jews from Arab countries after 1948, there are very few Jews left in Téttauen nowadays. [13]

Tétouan features a Mediterranean climate with Köppen climate classification of Csa. Located along the Mediterranean Sea, the weather in Tétouan is mild and rainy during the winter, hot and dry in the summer months.

Sights in and around Tétouan

There are Spanish international schools operated by that country's Ministry of Education: