Maidenhead locators are also commonly referred to as QTH Locator, grid locators or grid squares, despite having a non-square shape on any non-equirectangular cartographic projection. Use of the terms QTH locator and QRA locator was initially discouraged, as it caused confusion with the older QRA locator system. The only abbreviation recommended to indicate a Maidenhead reference in Morse code and radio teleprinter transmission was "LOC", as in "LOC KN28LH".[1]

Description of the system 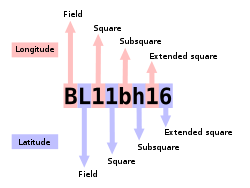 A Maidenhead locator compresses latitude and longitude into a short string of characters, which is similar in concept to the Georef system. This position information is presented in a limited level of precision to limit the amount of characters needed for its transmission using voice, Morse code, or any other operating mode.[2]

The chosen coding uses alternating pairs of letters and digits, like so:

At the 1999 IARU Conference in Lillehammer it was decided that the latitude and longitude to be used as a reference for the determining of locators should be based on the World Geodetic System 1984 (WGS-84).[4] To avoid negative numbers in the input data, the system also specifies that latitude is measured from the South Pole to the North Pole, and longitude measured eastward from the antimeridian of Greenwich, giving the Prime Meridian a false easting of 180° and the equator a false northing of 90°.

To simplify manual encoding, the base for the first pair of letters—traditionally called a field—was chosen to be 18, thus dividing the globe into 18 zones of longitude of 20° each, and 18 zones of latitude 10° each. These zones are encoded with the letters "A" through "R". 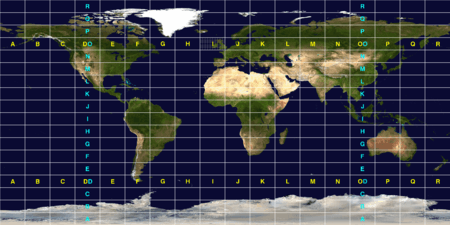 The second pair of numbers, called a square and placed after the first pair of letters, uses a base number of 10, and is encoded using the digits "0" to "9". This is where the alternative name "grid squares" comes from. Each of these squares represents 1° of latitude by 2° of longitude.

For additional precision, each square can optionally be sub-divided further, into subsquares. These are encoded into a second pair of letters, often (but not always) presented in lowercase. Again, to make manual calculations from degrees and minutes easier, 24 was chosen as the base number, giving these subsquares dimensions of 2.5' of latitude by 5' of longitude. The letters used are "a" through "x". 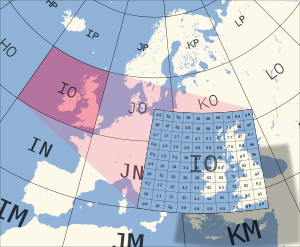 Fields are divided into 100 squares each.

For even more precise location mapping, two additional digits were proposed and ratified as an extended locator, making it altogether eight characters long, and dividing subsquares into even smaller ones. Such precision has uses in very short communication spans. Beyond this, no common definition exists to extend the system further into even smaller squares. Most often the extending is done by repeating alternating subsquare and square rules (base numbers 24 and 10 respectively). However, other bases for letter encodings have also been observed, and therefore such extended extended locators might not be compatible.

The Maidenhead locator system has been explicitly based on the WGS 84 geodetic datum since 1999. Before that time, it was usually based on each user's local national datum, which differ slightly from one another and WGS 84. As a result, stations very near the edges of squares at denoted precision may have changed their locators when changing over to the use of WGS 84.

On shortwave frequencies, positions are reported at square precision, and on VHF and UHF, subsquare precision is used. More precise position reports are very rarely used.

Use by radio amateurs

Today, individual radio amateurs and organisations around the world recognise and use Maidenhead locators. Maidenhead locators are used as part of the formulas for scoring in many VHF amateur radio contests. Grid locators are also the basis of earning many awards like the American Radio Relay League's VHF/UHF Century Club, URE TTLOC, etc. operating award.

In IARU Region 1 rules, VHF distance calculations are carried out between Maidenhead subsquare centres assuming a spherical Earth. This results in a small error in distance, but makes calculations simpler and, given the inherent imprecision in the used input data, it is not the biggest error source.

In 1985, the Radio Society of Great Britain published a small set of BASIC language routines to convert from locator references to geographical coordinates (latitude and longitude) for further processing.[5] A complete program in BASIC called Universal Gridlocator was made available the following year by ARRL for a nominal cost of US$3.[6] Many other utilities exist to convert latitude and longitude to locators, as this is a favourite hack for programmers who are also radio amateurs. Perl supports conversion between geographical coordinates and Maidenhead locators in module Ham::Locator by Andy Smith, available on CPAN.[7]