Malcolm Xavier Smith[1] (born July 5, 1989) is an American football linebacker for the Oakland Raiders of the National Football League (NFL). Smith played college football at USC. He was drafted by the Seattle Seahawks in the seventh round of the 2011 NFL Draft. Smith was named the Most Valuable Player of Super Bowl XLVIII after they beat the Denver Broncos.

Smith was born in Woodland Hills, California. He attended William Howard Taft High School, where he was a letterman in football and track.[2] In football, he was named to the Student Sports Sophomore All-American and Cal-Hi Sports All-State first team as a 2004 sophomore when he had 800-plus yards of total offense and 8 touchdowns, plus 2 interceptions, as Taft won the L.A. City title. As a junior in 2005, he made Cal-Hi Sports All-State Underclass first team, All-L.A. City first team and Los Angeles Daily News All-Area first team while making 41 tackles, 2 sacks and 1 fumble recovery, plus running for 639 yards on 73 carries (8.8 avg.) with 10 touchdowns and catching 27 passes for 411 yards (15.2 avg.) with 7 scores as Taft was the L.A. City runnerup. In his final year in 2006, he had 31 tackles, 10 sacks, and four fumble recoveries at linebacker and ran for 919 yards on 118 carries with 15 touchdowns as a running back, despite missing the first half of the season with a leg injury.[3] 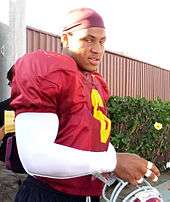 Smith enrolled at the University of Southern California (USC) in order to play college football for the USC Trojans football team. As a true freshman in 2007 Smith played in all 13 games as a backup linebacker and special teams player. He finished the year with six tackles and a forced fumble. As a sophomore in 2008 he again spent time as a backup and on special teams. He finished the season with 18 tackles in 13 games.[5] In the 2009 game against cross-town rival UCLA Bruins, Smith led the Trojan defense for a 28–7 win. Smith returned the first UCLA interception 62 yards for a touchdown in the first quarter. For his play, Smith was awarded the "Legend Nike Game Ball" for the National Defensive Player of the Week.[6]

Smith was drafted with the 242nd overall pick in the 2011 NFL Draft by the Seattle Seahawks,[7] reuniting him with his former USC head coach Pete Carroll. On January 19, 2014, Smith caught a game-ending interception in the end zone, tipped by Richard Sherman, in the NFC Championship Game against the San Francisco 49ers, the interception ensured the Seahawks' second Super Bowl appearance in franchise history.[8] On February 2, 2014, during the second quarter of Super Bowl XLVIII, Smith intercepted a pass from Peyton Manning and returned it 69 yards for a touchdown to make the score 22–0, this was Smith's fourth interception in the last five games, and the second interception returned for a touchdown. Later in that game, Smith recovered a fumble by Demaryius Thomas. He won the Super Bowl Most Valuable Player Award in recognition of his contributions to the Seahawks' victory, becoming the first defensive player to win the award since Dexter Jackson in Super Bowl XXXVII.[9] Despite being the Super Bowl MVP Smith returned to a reserve role for the 2014 NFL season, starting only five games for the Seahawks during the season.[10]

Smith has achalasia, a rare disorder of esophagus which affects its ability to move food toward the stomach. It started to affect him around the time of the 2009 Rose Bowl, where he began losing a few pounds of body weight each week because food would get stuck in his esophagus and he would have to throw it up. The weight loss was a problem as Smith tried to keep his weight up to 230 pounds (100 kg). Originally diagnosed as acid reflux, further tests revealed the problem as achalasia. Smith underwent a surgical procedure called a Heller myotomy which helped somewhat, but he still has dietary restrictions that force him to eat very slowly.[16]