This article is about the position in American and Canadian football. For other uses, see Linebacker (disambiguation). 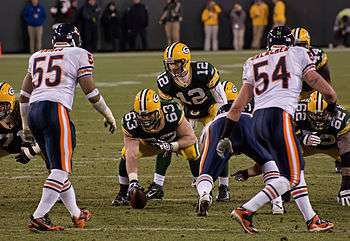 Lance Briggs and Brian Urlacher of the Chicago Bears lined up at linebacker on Lambeau Field in 2011.

A linebacker (LB or backer) is a playing position in American football and Canadian football. Linebackers are members of the defensive team, and line up approximately three to five yards (4 m) behind the line of scrimmage, behind the defensive linemen, and therefore "back up the line." Linebackers generally align themselves before the ball is snapped by standing upright in a "two point stance" (as opposed to the defensive linemen, who put one or two hands on the ground for a "three point stance" or "four point stance" before the ball is snapped).

The goal of the linebacker is to provide either extra run protection or extra pass protection based on the particular defensive play being executed. Another key play of the linebacker position is blitzing. A blitz occurs when a linebacker acts as an extra pass rusher running into any exposed gap. When a blitz is called by the defense, it is mainly to sack or hurry the opposing offense's quarterback. 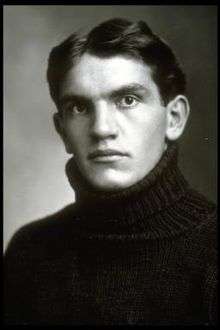 Before the advent of the two platoon system with separate units for offense and defense, the player who was the team's center on offense was often, though not always, the team's linebacker on defense. Hence today one usually sees four defensive linemen to the offense's five or more. Most sources claim coach Fielding H. Yost and center Germany Schulz of the University of Michigan invented the position.[1][2][3][4][5] Schulz was Yost's first linebacker in 1904 when he stood up from his usual position on the line. Yost was horrified at first, but came to see the wisdom in Schulz's innovation.[6] William Dunn of Penn St. was another Western linebacker soon after Schulz.

However, there are various historical claims tied to the linebacker position, including some before 1904. For example, Percy Given of Georgetown is another center with a claim to the title "first linebacker," supposedly standing up behind the line well before Schulz in a game against Navy in 1902.[7] Despite Given, most sources have the first linebacker in the South as Frank Juhan of Sewanee.[8] In the East, Ernest Cozens of Penn was "one of the first of the roving centers,"[9] another, archaic term for the position, supposedly coined by Hank Ketcham of Yale.[10] Walter E. Bachman of Lafayette was said to be "the developer of the "roving center" concept."[11] Edgar Garbisch of Army was credited with developing the "roving center method" of playing defensive football in 1921.[12]

In professional football, Cal Hubbard is credited with pioneering the linebacker position. He starred as a tackle and end, playing off the line in a style similar to that of a modern linebacker.[13]

The middle or inside linebacker (MLB or ILB), sometimes called "Mike" or "Mohr",[14] is often referred to as the "quarterback of the defense."[15] Often it is the middle linebacker who receives the defensive play calls from the sideline and relays that play to the rest of the team–and in the NFL he is usually the defensive player with the electronic sideline communicator. A jack-of-all-trades, the middle linebacker can be asked to blitz (though they often blitz less than the outside linebacker), cover, spy the quarterback, or even have a deep middle-of-the-field responsibility in the Tampa 2 defense. In standard defenses, middle linebackers commonly lead the team in tackles. The terms middle and inside linebacker are often used interchangeably;[16] they are also used to distinguish between a single middle linebacker playing in a 4–3 defense, and two inside linebackers playing in a 3-4 defense.[17] In a 3–4 defense that has these two inside linebackers, the larger, more run-stopping-oriented linebacker is usually still called "Mike", while the smaller, more pass protection/route coverage-oriented player is called "Will". "Mikes" usually line up towards the strong side or on the side the offense is more likely to run on (based on personnel matchups) while Wills may line up on the other side or even a little farther back between the defensive line and the secondary.

The outside linebacker (OLB), sometimes called the "Buck," is usually responsible for outside containment. This includes the strongside and weakside designations below. They are also responsible for blitzing the quarterback.

The weakside linebacker (WLB), or the "Will" (in 4–3 Defense and "Buck" in 3–4 Defense"), Jack or bandit[14] must be the fastest of the three, because he is often the one called into pass coverage. He is also usually chasing the play from the backside, so the ability to maneuver through traffic is a necessity for the Will. The Will usually aligns off the line of scrimmage at the same depth as Mike. Because of his position on the weakside, the Will does not often have to face large interior linemen one on one unless one is pulling. In coverage, the Will often covers the back that attacks his side of the field first in man coverage, while covering the weak flat in Texas Loop or hook/curl areas in zone coverage. The weakside linebacker is also commonly known as the right outside linebacker (ROLB). The ROLB needs to be strong in all areas of the physical realm.

Base 4–3 defense, the central middle linebacker in blue

In the 4–3 defense there are four down linemen and three linebackers. The middle linebacker is designated "Mike" (or "Mac") and two outside linebackers are designated "Sam" and "Will" according to how they line up against the offensive formation. If there is a strong call, the linebacker on the strongside is called "Sam", while the linebacker on the weakside is called "Will". The outside linebacker's job is to cover the end to make sure a run doesn't escape, and to watch the pass and protect from it. The middle linebacker's job is to stop runs between the tackles and watch the entire field to see the play develop. On pass plays, the linebackers' responsibilities vary based upon whether a man or zone coverage is called. In a zone coverage, the linebackers will generally drop into hook zones across the middle of the field. However, some zones will send the outside linebackers into the flats (area directly to the left and right of the hash marks, extending 4–5 yards downfield). In a man-to-man call, the "Sam" will often cover the tight end with help from a safety over the top, while at other times, the "Sam" and "Will" will be responsible for the first man out of the backfield on their side of the center, with the "Mike" covering if a second man exits on that side of the field.

In the "Tampa 2" zone defense the middle linebacker is required to drop quickly into a deep middle zone pass coverage thus requiring a quick player at this position.

The idea behind the 3–4 defense is to disguise where the fourth rusher will come from. Instead of the standard four down-linemen in the 4–3, only three players are clearly attacking on nearly every play. A key for running this defense successfully is having a defensive front of three large defensive linemen who command constant double teams. In particular, the nose tackle, who plays over the offensive center, must be able to hold ground and to occupy several offensive blockers in order to allow the linebackers to make plays. The focus of the 3–4 defensive line is to occupy offensive linemen thus freeing the linebackers to tackle the running back or to rush the passer or otherwise drop into pass coverage.

Generally, the primary responsibilities for both outside linebackers are to stop the run and rush the quarterback in passing situations, in which they line in front of the tackles like true defensive ends. The outside linebackers in a 3–4 defense are players who are very skilled at rushing the quarterback and they would be playing defensive end in a 4–3 defense. When it comes to the inside linebackers, one is generally a run-stuffing player who is better able to handle offensive linemen and stop running backs when the offense features a running play, while the other is often a smaller, faster player who excels in pass coverage. However, the smaller or cover LB should also be able to scrape and plug running lanes decently.

The design concept of the 3–4 defense is to confuse the offensive line in their blocking assignments, particularly in pass blocking, and to create a more complex read for the quarterback. Many 3–4 defenses have the ability to quickly hybrid into a 4–3 on the field.

In the 46 defense there are four linemen, three linebackers and a safety who is moved up behind the line of scrimmage. Thus, it appears as if there are 4 linebackers, but it is really 3 linebackers with one safety playing up with the other linebackers.

Three of the defensive linemen are over both of the offensive guards and the center, thereby making it difficult to double team any one of the three interior defensive linemen. This can also take away the ability of the offense to pull the guards on a running play, because this would leave one of the defenders unblocked, or, at best, give another lineman a very difficult block to make on one of the defenders. The safety, like the linebacker, can blitz, play man-on-man, play zone, or drop back into deep coverage like a normal safety would do. The 46 is used in heavy run situations to stop the run, when a team wants to bring lots of pressure, or merely to confuse the quarterback and offensive line.

This defense is effective at run-stopping but is weaker than a 4–3 defense at pass coverage because it uses only three defensive backs. One of the outside linebackers is usually called into either blitz or pass coverage in order to make up for the missing DB. In the NFL and college football, this alignment is used mainly in short yardage situations or near the goal line. It is commonly used in high school football.