Man with a Movie Camera

For other uses, see Man with a Movie Camera (disambiguation).

Vertov's feature film, produced by the film studio VUFKU, presents urban life in the Soviet cities of Kiev, Kharkov, Moscow and Odessa.[3] From dawn to dusk Soviet citizens are shown at work and at play, and interacting with the machinery of modern life. To the extent that it can be said to have "characters," they are the cameramen of the title, the film editor, and the modern Soviet Union they discover and present in the film.

In the British Film Institute's 2012 Sight & Sound poll, film critics voted Man with a Movie Camera the 8th best film ever made.[4] In 2014 Sight & Sound also named it the best documentary of all time.[5] 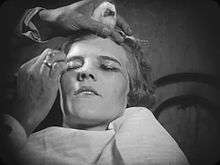 The film has an unabashedly avant-garde style, and emphasizes that film can go anywhere. For instance, the film uses such scenes as superimposing a shot of a cameraman setting up his camera atop a second, mountainous camera, superimposing a cameraman inside a beer glass, filming a woman getting out of bed and getting dressed, even filming a woman giving birth, and the baby being taken away to be bathed.

Vertov's message about the prevalence and unobtrusiveness of filming was not yet true—cameras might have been able to go anywhere, but not without being noticed; they were too large to be hidden easily, and too noisy to remain hidden anyway. To get footage using a hidden camera, Vertov and his brother Mikhail Kaufman (the film's co-author) had to distract the subject with something else even louder than the camera filming them.

The film also features a few obvious stagings such as the scene of a woman getting out of bed and getting dressed and the shot of chess pieces being swept to the center of the board (a shot spliced in backwards so the pieces expand outward and stand in position). The film was criticized for both the stagings and the stark experimentation, possibly as a result of its director's frequent assailing of fiction film as a new "opiate of the masses." 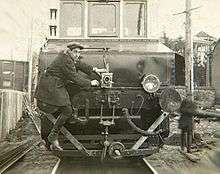 In this shot, Mikhail Kaufman acts as a cameraman risking his life in search of the best shot

Vertov — born David Abelevich Kaufman — was an early pioneer in documentary film-making during the late 1920s. He belonged to a movement of filmmakers known as the kinoks, or kino-oki (kino-eyes). Vertov, along with other kino artists declared it their mission to abolish all non-documentary styles of film-making. This radical approach to movie making led to a slight dismantling of film industry: the very field in which they were working. Most of Vertov's films were highly controversial, and the kinok movement was despised by many filmmakers of the time. Vertov's crowning achievement, Man with a Movie Camera, was his response to critics who rejected his previous film, A Sixth Part of the World. Critics had declared that Vertov's overuse of "intertitles" was inconsistent with the film-making style to which the 'kinoks' subscribed.

Working within that context, Vertov dealt with much fear in anticipation of the film's release. He requested a warning to be printed in the Soviet central Communist newspaper, Pravda, which spoke directly of the film's experimental, controversial nature. Vertov was worried that the film would be either destroyed or ignored by the public. Upon the official release of Man with a Movie Camera, Vertov issued a statement at the beginning of the film, which read:

"The film Man with a Movie Camera represents

This new experimentation work by Kino-Eye is directed towards the creation of an authentically international absolute language of cinema – ABSOLUTE KINOGRAPHY – on the basis of its complete separation from the language of theatre and literature."

This manifesto echoes an earlier one that Vertov wrote in 1922, in which he disavowed popular films he felt were indebted to literature and theater.[6]

Working within a Marxist ideology, Vertov strove to create a futuristic city that would serve as a commentary on existing ideals in the Soviet world. This artificial city’s purpose was to awaken the Soviet citizen through truth and to ultimately bring about understanding and action. The kino’s aesthetic shined through in his portrayal of electrification, industrialization, and the achievements of workers through hard labour. This could also be viewed as early modernism in film.

Some have mistakenly stated that many visual ideas, such as the quick editing, the close-ups of machinery, the store window displays, even the shots of a typewriter keyboard are borrowed from Walter Ruttmann's Berlin: Symphony of a Great City (1927), which predates Man with a Movie Camera by two years, but as Vertov wrote to the German press in 1929,[7] these techniques and images had been developed and employed by him in his Kino-Pravda newsreels and documentaries for the last ten years, all of which predate Berlin. Vertov's pioneering cinematic concepts actually inspired other abstract films by Ruttmann and others, including writer, translator, filmmaker and critic Liu Na'ou (1905–1940) whose The Man Who Has a Camera (1933), pays explicit homage to Vertov's The Man With a Movie Camera.[8]

Because of doubts before screening, and great anticipation from Vertov's pre-screening statements, the film gained great interest before even being shown. Once the film was finally screened, the public either embraced or dismissed Vertov's stylistic choices. The pace of the film's editing—more than four times faster than a typical 1929 feature, with approximately 1,775 separate shots—perturbed some viewers, including The New York Times' reviewer Mordaunt Hall:

"The producer, Dziga Vertov, does not take into consideration the fact that the human eye fixes for a certain space of time that which holds the attention."[9]

On a technical note, Man with a Movie Camera's usage of double exposure and seemingly 'hidden' cameras made the movie come across as a very surreal montage rather than a linear motion picture. Many of the scenes in the film contain people, which change size or appear underneath other objects (double exposure). Because of these aspects, the movie’s overall speed is fast moving and enthralling. The sequences and close-ups capture emotional qualities, which could not be fully portrayed through the use of words. The film's lack of 'actors' and 'sets' makes for a unique view of the everyday world; one "directed toward the creation of a genuine, international, purely cinematic language, entirely distinct from the language of theatre and literature."

Man with a Movie Camera, depicting the daily life of a Soviet city, was actually filmed over a period of about 3 years. Four Soviet cities — Kharkiv, Kiev, Moscow and Odessa — were the shooting locations.[10]

The film, originally released in 1929, was silent, and accompanied in theaters with live music. It has since been released a number of times with different soundtracks: