Tokyo Story (東京物語, Tōkyō Monogatari) is a 1953 Japanese drama film directed by Yasujirō Ozu and starring Chishū Ryū and Chieko Higashiyama. It tells the story of an aging couple who travel to Tokyo to visit their grown children. The film contrasts the behavior of their children, who are too busy to pay them much attention, and their widowed daughter-in-law, who treats them with kindness.

Ozu and screenwriter Kōgo Noda wrote the script in 103 days and loosely based it on the 1937 American film Make Way for Tomorrow, directed by Leo McCarey. Noda first suggested adapting the film, which Ozu had not yet seen. Ozu used many of the same cast and crew members that he had worked with for years. Released in Japan in 1953, it did not immediately gain international recognition and was considered "too Japanese" to be marketable by Japanese film exporters. It was screened in London in 1957 and won the inaugural Sutherland Trophy the following year, and received praise from US film critics after a 1972 screening in New York City.

It is widely regarded as Ozu's masterpiece and is often cited as one of the greatest films ever made. In 2012, it was voted the best film of all time in a poll of film directors by Sight & Sound magazine.

A retired couple, Shūkichi and Tomi Hirayama (played by Chishū Ryū and Chieko Higashiyama respectively) live in the town of Onomichi in southwest Japan with their daughter Kyōko (played by Kyōko Kagawa). They have five adult children, four living. The couple travel to Tokyo to visit their son, daughter, and widowed daughter-in-law.

Their eldest son, Kōichi (So Yamamura), is a pediatrician, and their eldest daughter, Shige (Haruko Sugimura), runs a hairdressing salon. Kōichi and Shige are both busy, and do not have much time for their parents. Only their widowed daughter-in-law, Noriko (Setsuko Hara), goes out of her way to entertain them. She takes Shūkichi and Tomi on a sightseeing tour of metropolitan Tokyo.

Kōichi and Shige pay for their parents' stay at a hot spring spa at Atami, but the parents return early because the nightlife at the hotel interrupts their sleep. When they return, Shige explains that she sent them to Atami because she wanted to use their bedroom for a meeting. Tomi goes to stay with Noriko, whose husband, her son, died eight years ago in the war. Tomi advises Noriko to remarry. Shūkichi, meanwhile, gets drunk with some old friends, then returns to Shige's salon.

The couple remark on how their children have changed, and they leave for home, planning to see their younger son Keizō when the train passes through Osaka. Though they originally had planned to see him without leaving the train, Tomi takes ill during the journey and they decide to disembark, staying until she feels better the next day. However, when they later reach Onomichi, Tomi becomes critically ill. Kōichi, Shige and Noriko rush to Onomichi to see Tomi, who dies shortly afterwards. Keizō arrives late as he is out-stationed.

After the funeral, Kōichi, Shige and Keizō leave immediately, with only Noriko not returning. After they leave, Kyōko is angry with them and complains to Noriko that they are selfish to their family. She believes that Kōichi, Shige and Keizō don't care how hard it was for their father when he lost their mother, and thinks strangers would've been more respectful towards her. Noriko responds that while she understands Kyoko's disappointment with her siblings, she also explains that everyone has their own life to lead and that the drift between parents and children is inevitable. She convinces Kyoko not to be too harsh on her siblings because one day she too will understand how hard it is for them to have to take time from both their families and their own lives.

After Kyōko leaves for school, Noriko informs her father-in-law that she must return to Tokyo that afternoon. Shūkichi tells her that she has treated them best despite not being related by blood. Noriko insists on her own selfishness; Shūkichi credits her protests to humility. He gives her a watch from the late Tomi as a memento. Noriko breaks down in tears and confesses her loneliness. Shūkichi encourages her to remarry again as soon as possible. At the end, the train with Noriko speeds from Onomichi back to Tokyo, leaving behind Kyōko and Shūkichi. 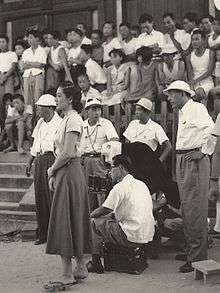 The script was developed by Yasujirō Ozu and his long-time collaborator Kōgo Noda over a period of 103 days in a country inn in Chigasaki.[1] Ozu, Noda and cinematographer Yūharu Atsuta scouted locations in Tokyo and Onomichi for another month before shooting started. Shooting and editing the film took place from July to October 1953. Ozu used the same film crew and actors he had worked with for many years.[2][3] Actor Chishū Ryū said that Ozu was always happiest when finishing the final draft of a script and that there were never any changes to the final draft.[4]

Tokyo Story was released on November 3, 1953 in Japan. The following year Haruko Sugimura won the Mainichi Film Award for Best Supporting Actress for her role as the eldest daughter Shige.[5]

It was screened at the National Film Theatre in London in 1957.[6] It is Ozu's best known film in both the East and the West. After the success of Akira Kurosawa's Rashomon at the 1951 Venice Film Festival, Japanese films began getting international distribution.[7] However Japanese film exporters considered Ozu's work "too Japanese" and unmarketable. It was not until the 1960s that Ozu's films began to be screened in New York City at film festivals, museums and theaters.[8]

Tokyo Story is often admired for its emotional depth while avoiding melodrama. It was awarded the first Sutherland Trophy for the most original and creative film in 1958.[9] UK critic Lindsay Anderson wrote that "It is a film about relationships, a film about time, and how it affects human beings (particularly parents and children) and how we must reconcile ourselves to its workings."[10]

After a screening at the New Yorker Theater in 1972 it received rave reviews from several prominent critics who were unfamiliar with the film or Ozu up until that point.[11] Charles Micherer of Newsweek said it was "like a Japanese paper flower that is dropped into water and then swells to fill the entire container with its beauty."[12] Stanley Kauffmann put it on his 10 Best list of 1972 and wrote "Ozu, a lyrical poet, whose lyrics swell quietly into the epic."[13]

It holds a 100% "Fresh" rating on the review aggregate website Rotten Tomatoes, based on 38 critical reviews, with an average score of 9.7/10.[18] John Walker, former editor of the Halliwell's Film Guides, places Tokyo Story at the top of his published list of the best 1000 films ever made. Tokyo Story is also included in film critic Derek Malcolm's The Century of Films,[19][20] a list of films which he deems artistically or culturally important, and Time magazine lists it among its All-Time 100 Movies. Roger Ebert includes it in his series of great movies,[21] and Paul Schrader placed it in the "Gold" section of his Film Canon.[22]

Like all of Ozu's sound films, Tokyo Story's pacing is slow.[23] Important events are often not shown on screen but revealed through dialogue. For example, the train journeys to and from Tokyo are not depicted.[24] A distinctive camera style is used, in which the camera height is low and almost never moves; film critic Roger Ebert notes that the camera moves once in the film, which is "more than usual" for an Ozu film.[21] The low camera positions are also reminiscent of sitting on a traditional Japanese tatami mat.[25] Ozu rarely shot master shots[26] and often broke the 180-degree rule of filmmaking and screen direction. Characters, who often sit side by side in scenes, often appear to be facing the same direction when speaking to each other, such as in the first scene with Shūkichi and Tomi.[27] During some transitions, characters exit a scene screen right and then enter the next scene screen right.[28]

Ozu favored a stationary camera[29] and believed strongly in minimalism.[30] David Dresser has compared the film's style and "de-emphasized plot“ to Zen Buddhism and the modern world's fascination with surface value and materialism.[31] Many of the transitional shots between sequences were still lives without any people, such as smokestacks and landscapes.[32] In his narrative storytelling, Ozu often had certain key scenes take place off camera with the viewer only learning about them through the characters' dialogue. The audience never sees Shūkichi and Tomi visit their son Keizō and Tomi's illness begins off-screen.[33]

Themes in the film include the break-up and Westernization of the traditional Japanese family after World War II and the inevitability of children growing apart from their parents.[34] The film takes place in 1953 post-war Japan, a few years after the new Civil Code of 1948 began the country's rapid re-growth and embraced Western capitalist ideals, while simultaneously destroying older traditions such as the Japanese family and its values.[35] Ozu was very close to his own mother, living with her as a surrogate wife and never marrying.[36] Ozu called Tokyo Story "the film that tends most strongly to melodrama."[37] It is considered a Shomin-geki film for its depiction of working-class people.[38]

Similarities to Make Way for Tomorrow

Tokyo Story was inspired by the 1937 American film Make Way for Tomorrow, directed by Leo McCarey. Noda initially suggested the plot of the older film to Ozu, who hadn't seen it. Noda remembered it from its initial release in Japan.[39][40] Both films depict an elderly couple and their problems with their family[41] and both films depict the couple travelling to visit their children.[42] Differences include the older film taking place in Depression era US with the couple's problem being economical and Toyko Story taking place in post-war Japan, where the problems are more cultural and emotional.[43] The two films also end differently.[44] David Bordwell wrote that Ozu "re-cast" the original film instead of adapt it.[45]

The film was restored and released on DVD and Blu-ray by The Criterion Collection (Region 1) and by Tartan Video in Region 2. In 2010, the BFI released a Region 2 dual-format edition (Blu-ray + DVD).[48] Included with this release is a standard definition presentation of Brothers and Sisters of the Toda Family.