This article is about real life association football managers. For the video game, see Football Manager. 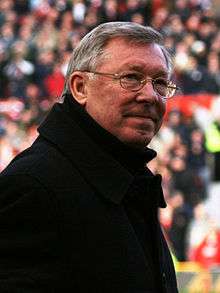 Sir Alex Ferguson CBE, winner of the most English Manager of the Year awards, all won during his tenure as manager of Manchester United. As of 2015 he is the UEFA Coaching Ambassador.[1]

In association football, a manager is an occupation of head coach in the United Kingdom responsible for running a football club or a national team. Outside of the British Isles and across most of Europe, a title of head coach or coach is predominant.

The manager of a professional club is responsible to the club chairman.

The manager's responsibilities in a professional football club usually include (but are not limited to) the following:

Some of the above responsibilities are shared with the director of football or sporting director, and are at times delegated to an assistant manager or club coach.

Additionally, depending on the club, some minor responsibilities include:

These responsibilities are more common among managers of small clubs.

The title of manager is almost exclusively used in British football.[2] In the majority of countries where professional football is played, the person responsible for the direction of a team is awarded the position of coach or "trainer". For instance, despite the general equivalence in responsibilities, Bobby Robson was referred to as the manager of England, while Joachim Löw was described as the head coach of Germany (Germany also has a team manager role that is subordinate to the head coach and that is filled by Oliver Bierhoff). For 1994-96 including Euro 96, however, The Football Association struggled to identify an alternative candidate to Terry Venables, so their discomfort with his soiled reputation for probity was articulated in their appointment of him as England 'coach' rather than under the traditional title of 'manager'.

The responsibilities of a European football manager or head coach tend to be divided up in North American professional sports, where the teams usually have a separate general manager and head coach (known as a field manager in baseball), although occasionally a person may fill both these roles. While the first team coach in soccer is usually an assistant to the manager who actually holds the real power, the American-style general manager and head coach have clearly distinct areas of responsibilities. For example, a typical European football manager would have the final say on in-game decisions (including player line-ups), and off-the-field and roster management decisions (including contract negotiations). In American sports, these duties would be handled separately by the head coach and general manager, respectively.