Markov decision processes (MDPs) provide a mathematical framework for modeling decision making in situations where outcomes are partly random and partly under the control of a decision maker. MDPs are useful for studying a wide range of optimization problems solved via dynamic programming and reinforcement learning. MDPs were known at least as early as the 1950s (cf. Bellman 1957). A core body of research on Markov decision processes resulted from Ronald A. Howard's book published in 1960, Dynamic Programming and Markov Processes.[1] They are used in a wide area of disciplines, including robotics, automated control, economics, and manufacturing.

More precisely, a Markov Decision Process is a discrete time stochastic control process. At each time step, the process is in some state

, and the decision maker may choose any action

that is available in state

. The process responds at the next time step by randomly moving into a new state

, and giving the decision maker a corresponding reward

The probability that the process moves into its new state

is influenced by the chosen action. Specifically, it is given by the state transition function

. Thus, the next state

depends on the current state

and the decision maker's action

, it is conditionally independent of all previous states and actions; in other words, the state transitions of an MDP process satisfies the Markov property. 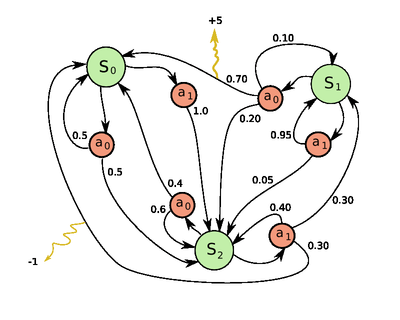 Example of a simple MDP with three states and two actions.

A Markov decision process is a 5-tuple

(Note: The theory of Markov decision processes does not state that

are finite, but the basic algorithms below assume that they are finite.)

The core problem of MDPs is to find a "policy" for the decision maker: a function

that specifies the action

that the decision maker will choose when in state

. Note that once a Markov decision process is combined with a policy in this way, this fixes the action for each state and the resulting combination behaves like a Markov chain.

that will maximize some cumulative function of the random rewards, typically the expected discounted sum over a potentially infinite horizon:

is the discount factor and satisfies

when the discount rate is r.)

is typically close to 1.

Because of the Markov property, the optimal policy for this particular problem can indeed be written as a function of

only, as assumed above.

MDPs can be solved by linear programming or dynamic programming. In what follows we present the latter approach.

and the reward function

, and we wish to calculate the policy that maximizes the expected discounted reward.

The standard family of algorithms to calculate this optimal policy requires storage for two arrays indexed by state: value

which contains actions. At the end of the algorithm,

will contain the solution and

The algorithm has the following two kinds of steps, which are repeated in some order for all the states until no further changes take place. They are defined recursively as follows:

Their order depends on the variant of the algorithm; one can also do them for all states at once or state by state, and more often to some states than others. As long as no state is permanently excluded from either of the steps, the algorithm will eventually arrive at the correct solution.

In value iteration (Bellman 1957), which is also called backward induction, the

function is not used; instead, the value of

whenever it is needed. Lloyd Shapley's 1953 paper on stochastic games[2] included as a special case the value iteration method for MDPs, but this was recognized only later on.[3]

Substituting the calculation of

into the calculation of

as a guess of the value function. It then iterates, repeatedly computing

converges with the left-hand side equal to the right-hand side (which is the "Bellman equation" for this problem).

Instead of repeating step two to convergence, it may be formulated and solved as a set of linear equations.

This variant has the advantage that there is a definite stopping condition: when the array

does not change in the course of applying step 1 to all states, the algorithm is completed.

In this variant, the steps are preferentially applied to states which are in some way important - whether based on the algorithm (there were large changes in

around those states recently) or based on use (those states are near the starting state, or otherwise of interest to the person or program using the algorithm).

A Markov decision process is a stochastic game with only one player.

The solution above assumes that the state

is known when action is to be taken; otherwise

cannot be calculated. When this assumption is not true, the problem is called a partially observable Markov decision process or POMDP.

A major advance in this area was provided by Burnetas and Katehakis in "Optimal adaptive policies for Markov decision processes".[4] In this work a class of adaptive policies that possess uniformly maximum convergence rate properties for the total expected finite horizon reward, were constructed under the assumptions of finite state-action spaces and irreducibility of the transition law. These policies prescribe that the choice of actions, at each state and time period, should be based on indices that are inflations of the right-hand side of the estimated average reward optimality equations.

If the probabilities or rewards are unknown, the problem is one of reinforcement learning (Sutton & Barto 1998).

For this purpose it is useful to define a further function, which corresponds to taking the action

and then continuing optimally (or according to whatever policy one currently has):

While this function is also unknown, experience during learning is based on

pairs (together with the outcome

and I tried doing

happened"). Thus, one has an array

and uses experience to update it directly. This is known as Q‑learning.

In learning automata theory, a stochastic automaton to consist of:

The states of such an automaton correspond to the states of a "discrete-state discrete-parameter Markov process".[7] At each time step t=0,1,2,3,..., the automaton reads an input from its environment, updates P(t) to P(t+1) by A, randomly chooses a successor state according to the probabilities P(t+1) and outputs the corresponding action. The automaton's environment, in turn, reads the action and sends the next input to the automaton.[6]

Other than the rewards, a Markov decision process

can be understood in terms of Category theory. Namely, let

denote the free monoid with generating set A. Let Dist denote the Kleisli category of the Giry monad. Then a functor

encodes both the set S of states and the probability function P.

In this way, Markov decision processes could be generalized from monoids (categories with one object) to arbitrary categories. One can call the result

a context-dependent Markov decision process, because moving from one object to another in

In order to discuss the continuous-time Markov Decision Process, we introduce two sets of notations:

If the state space and action space are finite,

If the state space and action space are continuous,

If the state space and action space are finite, we could use linear programming to find the optimal policy, which was one of the earliest approaches applied. Here we only consider the ergodic model, which means our continuous-time MDP becomes an ergodic continuous-time Markov Chain under a stationary policy. Under this assumption, although the decision maker can make a decision at any time at the current state, he could not benefit more by taking more than one action. It is better for him to take an action only at the time when system is transitioning from the current state to another state. Under some conditions,(for detail check Corollary 3.14 of Continuous-Time Markov Decision Processes), if our optimal value function

is independent of state

, we will have the following inequality:

If there exists a function

will be the smallest

satisfying the above equation. In order to find

, we could use the following linear programming model:

is a feasible solution to the D-LP if

is nonnative and satisfied the constraints in the D-LP problem. A feasible solution

for all feasible solution

to the D-LP. Once we found the optimal solution

, we could use those optimal solution to establish the optimal policies.

In continuous-time MDP, if the state space and action space are continuous, the optimal criterion could be found by solving Hamilton-Jacobi-Bellman (HJB) partial differential equation. In order to discuss the HJB equation, we need to reformulate our problem

is the terminal reward function,

is the system state vector,

is the system control vector we try to find.

shows how the state vector change over time. Hamilton-Jacobi-Bellman equation is as follows:

We could solve the equation to find the optimal control

, which could give us the optimal value

The terminology and notation for MDPs are not entirely settled. There are two main streams — one focuses on maximization problems from contexts like economics, using the terms action, reward, value, and calling the discount factor

, while the other focuses on minimization problems from engineering and navigation, using the terms control, cost, cost-to-go, and calling the discount factor

. In addition, the notation for the transition probability varies.

There are a number of applications for CMDPs. It is recently being used in motion planning scenarios in robotics.[10]