Motion planning (also known as the navigation problem or the piano mover's problem) is a term used in robotics for the process of breaking down a desired movement task into discrete motions that satisfy movement constraints and possibly optimize some aspect of the movement.

For example, consider navigating a mobile robot inside a building to a distant waypoint. It should execute this task while avoiding walls and not falling down stairs. A motion planning algorithm would take a description of these tasks as input, and produce the speed and turning commands sent to the robot's wheels. Motion planning algorithms might address robots with a larger number of joints (e.g., industrial manipulators), more complex tasks (e.g. manipulation of objects), different constraints (e.g., a car that can only drive forward), and uncertainty (e.g. imperfect models of the environment or robot).

Motion planning has several robotics applications, such as autonomy, automation, and robot design in CAD software, as well as applications in other fields, such as animating digital characters, video game artificial intelligence, architectural design, robotic surgery, and the study of biological molecules.

Example of a workspace. 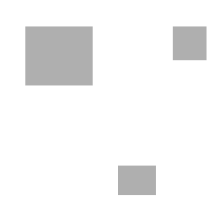 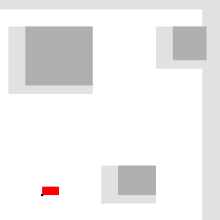 Configuration space for a rectangular translating robot (pictured red). White = Cfree, gray = Cobs, where dark gray = the objects, light gray = configurations where the robot would touch an object or leave the workspace. 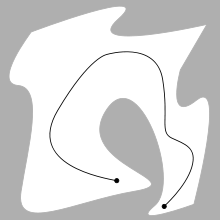 Example of a valid path. 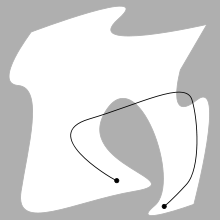 Example of an invalid path. 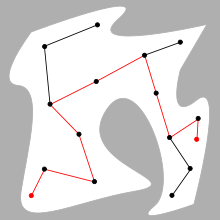 Example of a road map.

A basic motion planning problem is to produce a continuous motion that connects a start configuration S and a goal configuration G, while avoiding collision with known obstacles. The robot and obstacle geometry is described in a 2D or 3D workspace, while the motion is represented as a path in (possibly higher-dimensional) configuration space.

The set of configurations that avoids collision with obstacles is called the free space Cfree. The complement of Cfree in C is called the obstacle or forbidden region.

Often, it is prohibitively difficult to explicitly compute the shape of Cfree. However, testing whether a given configuration is in Cfree is efficient. First, forward kinematics determine the position of the robot's geometry, and collision detection tests if the robot's geometry collides with the environment's geometry.

Low-dimensional problems can be solved with grid-based algorithms that overlay a grid on top of configuration space, or geometric algorithms that compute the shape and connectivity of Cfree.

Exact motion planning for high-dimensional systems under complex constraints is computationally intractable. Potential-field algorithms are efficient, but fall prey to local minima (an exception is the harmonic potential fields). Sampling-based algorithms avoid the problem of local minima, and solve many problems quite quickly. They are unable to determine that no path exists, but they have a probability of failure that decreases to zero as more time is spent.

Sampling-based algorithms are currently considered state-of-the-art for motion planning in high-dimensional spaces, and have been applied to problems which have dozens or even hundreds of dimensions (robotic manipulators, biological molecules, animated digital characters, and legged robots).

Grid-based approaches overlay a grid on configuration space, and assume each configuration is identified with a grid point. At each grid point, the robot is allowed to move to adjacent grid points as long as the line between them is completely contained within Cfree (this is tested with collision detection). This discretizes the set of actions, and search algorithms (like A*) are used to find a path from the start to the goal.

These approaches require setting a grid resolution. Search is faster with coarser grids, but the algorithm will fail to find paths through narrow portions of Cfree. Furthermore, the number of points on the grid grows exponentially in the configuration space dimension, which make them inappropriate for high-dimensional problems.

Traditional grid-based approaches produce paths whose heading changes are constrained to multiples of a given base angle, often resulting in suboptimal paths. Any-angle path planning approaches find shorter paths by propagating information along grid edges (to search fast) without constraining their paths to grid edges (to find short paths).

Grid-based approaches often need to search repeatedly, for example, when the knowledge of the robot about the configuration space changes or the configuration space itself changes during path following. Incremental heuristic search algorithms replan fast by using experience with the previous similar path-planning problems to speed up their search for the current one.

These approaches are similar to grid-based search approaches except that they generate a paving covering entirely the configuration space instead of a grid.[2] The paving is decomposed into two subpavings X−,X+ made with boxes such that X− ⊂ Cfree ⊂ X+. Characterizing Cfree amounts to solve a set inversion problem. Interval analysis could thus be used when Cfree cannot be described by linear inequalities in order to have a guaranteed enclosure.

The robot is thus allowed to move freely in X−, and cannot go outside X+. To both subpavings, a neighbor graph is built and paths can be found using algorithms such as Dijkstra or A*. When a path is feasible in X−, it is also feasible in Cfree. When no path exists in X+ from one initial configuration to the goal, we have the guarantee that no feasible path exists in Cfree. As for the grid-based approach, the interval approach is inappropriate for high-dimensional problems, due to the fact that the number of boxes to be generated grows exponentially with respect to the dimension of configuration space.

An illustration is provided by the three figures on the right where a hook with two degrees of freedom has to move from the left to the right, avoiding two horizontal small segments. 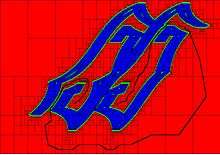 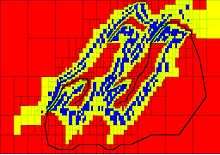 This figure corresponds to the same path as above but obtained with many fewer boxes.The algorithm avoids bisecting boxes in parts of the configuration space that do not influence the final result.

The decomposition with subpavings using interval analysis also makes it possible to characterize the topology of Cfree such as counting its number of connected components.[3]

Reward-Based Algorithms assume that robot in each state (position and internal state include direction) can choose between different action (motion). However, the result of each action is not definite. In the other word, outcomes (displacement) are partly random and partly under the control of the robot. Robot gets positive reward when it reaches to the target and gets negative reward if collides with obstacle. These Algorithms try to find a path which maximized cumulative future rewards. Markov decision processes (MDPs) is a popular mathematical framework which is used in many of Reward-Based Algorithms. Advantage of MDPs over other Reward-Based Algorithms is that it generate optimal path. Disadvantage of MDPs is that it limit robot to choose from a finite set of action; Therefore, the path is not smooth (similar to Grid-based approaches). Fuzzy Markov decision processes (FDMPs)is an extension of MDPs which generate smooth path with using an fuzzy inference system.[1]

One approach is to treat the robot's configuration as a point (usually electron) in a potential field that combines attraction to the goal, and repulsion from obstacles. The resulting trajectory is output as the path. This approach has advantages in that the trajectory is produced with little computation. However, they can become trapped in local minima of the potential field, and fail to find a path. The Artificial potential fields can be achieved by direct equation similar to electrostatic potential fields or can be drive by set of linguistic rules.[4]

Sampling-based algorithms represent the configuration space with a roadmap of sampled configurations. A basic algorithm samples N configurations in C, and retains those in Cfree to use as milestones. A roadmap is then constructed that connects two milestones P and Q if the line segment PQ is completely in Cfree. Again, collision detection is used to test inclusion in Cfree. To find a path that connects S and G, they are added to the roadmap. If a path in the roadmap links S and G, the planner succeeds, and returns that path. If not, the reason is not definitive: either there is no path in Cfree, or the planner did not sample enough milestones.

These algorithms work well for high-dimensional configuration spaces, because unlike combinatorial algorithms, their running time is not (explicitly) exponentially dependent on the dimension of C. They are also (generally) substantially easier to implement. They are probabilistically complete, meaning the probability that they will produce a solution approaches 1 as more time is spent. However, they cannot determine if no solution exists.

Given basic visibility conditions on Cfree, it has been proven that as the number of configurations N grows higher, the probability that the above algorithm finds a solution approaches 1 exponentially.[5] Visibility is not explicitly dependent on the dimension of C; it is possible to have a high-dimensional space with "good" visibility or a low-dimensional space with "poor" visibility. The experimental success of sample-based methods suggests that most commonly seen spaces have good visibility.

There are many variants of this basic scheme:

A motion planner is said to be complete if the planner in finite time either produces a solution or correctly reports that there is none. Most complete algorithms are geometry-based. The performance of a complete planner is assessed by its computational complexity.

Many algorithms have been developed to handle variants of this basic problem.

Hybrid systems are those that mix discrete and continuous behavior. Examples of such systems are: