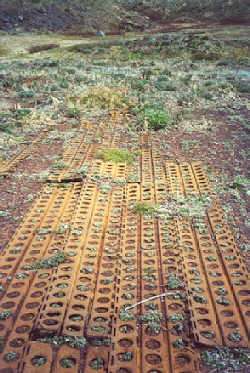 Marston Mat (also known as pierced (or perforated) steel planking (PSP)), is standardized, perforated steel matting material originally developed by the United States at the Waterways Experiment Station shortly before World War II, primarily for the rapid construction of temporary runways and landing strips. (The name is also misspelled as Marsden matting.) The nickname came from Marston, North Carolina adjacent to Camp Mackall airfield where the material was first used.[1]

PSP consisted of steel strips with punched holes in it. These holes were in rows, and a formation of U-shaped channels between the holes. Hooks were formed along one long edge and slots along the other long edge so that adjacent mats could be connected. The short edges were cut straight with no holes or hooks. To achieve lengthwise interlocking, the mats were laid in a staggered pattern.

The hooks were usually held in the slots by a steel clip that filled the part of the slot that is empty when the adjacent sheets are properly engaged. The holes were bent up at their edges so that the beveled edge stiffened the area around the hole. In some mats a T-shaped stake could be driven at intervals through the holes to keep the assembly in place on the ground. Sometimes the sheets were welded together.

A variation made from aluminum was produced to allow easier transportation by aircraft, since it weighed about 2/3 as much. It was referred to as PAP for perforated aluminum planking,[2] but was not as common as aluminum was a controlled strategic material during World War II.

After the war PSP was used by many southeastern U.S. auto racing teams since it was manufactured in the area, and used in many abandoned military airfields. It was also used during a similar period when NASCAR teams used car trailers. 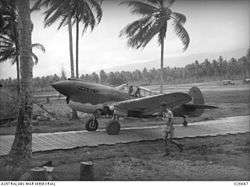 Marston Mat was extensively used during World War II by Seabees (Construction Battalions) and other front line construction personnel to build runways and other readily usable surfaces over all kinds of terrain. The first (experimental) use of PSP was in 1942/1942 for constructing a 5,000 foot runway on Greenland's 'Bluie West One' (BW-1), an Allied Ferry Command and U.S.A.A.F airfield located on the extreme southwest corner of Greenland's landmass, at the termination of Eriksfjord, and near the coastal community of Narsarsuaq. Deemed a success, it was then used extensively in the Pacific Theater of Operations. A C-47 Skytrain supply aircraft was the first plane to land on the first steel-mat runway constructed in France after the Invasion of Normandy.[3] 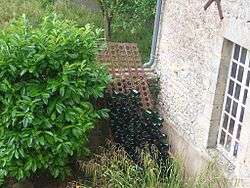 Marston Mat repurposed for storage of empty wine bottles on a farm in Normandy in 2007. Hooks and slots along long edges clearly visible.

On Pacific islands the matting was typically covered with crushed and rolled coral or soil to form a level surface. The perforated and channeled design of the matting created strength and rigidity and facilitated drainage. A runway two hundred feet wide and 5000 feet (1500 m) long could be created within two days by a small team of engineers.

At the start of the Berlin Airlift the runways at Tempelhof Airport in the US Zone of Berlin were made of PSP. Designed to support fighters and smaller cargo aircraft, the Douglas C-54 Skymaster that formed the backbone of the U.S. effort was too heavy for the PSP. Berliners were hired to fix the runway between the three-minute arrivals, running onto the runways with bags of sand to dump onto the mats and soften the surface.

Large quantities of matting were produced; approximately 2 million tons costing more than US$200 million (in the 1940s).[4] At the end of the war a large amount of the material remained as war surplus and was pressed into use in various civil engineering applications such as road and bridge construction. As they were made from steel with a high manganese content, the matting was also highly resistant to corrosion.[5] In various countries located in the Pacific Theatre, particularly in the Philippines and Papua New Guinea, matting still remains in use as fencing[6] or roadway barriers, in some cases stretching for miles.

With the deployment of jet aircraft and helicopters, FOD (Foreign Object Damage) became a hazard. Jet blast or rotor downdraft could stir up loose materials on the ground which might then be sucked into jet inlets. The M8A1 mat was developed to prevent this, omitting the pierced holes that exposed the soil beneath.[7] This mat has a solid surface, strengthened by corrugations that also encouraged the drainage of rainwater. The mat size also changed to be 22 by 144 inches (560 mm × 3,660 mm).

Later mats were developed in a lightweight aluminum version, 24 by 144 inches (610 mm × 3,660 mm).[7] This was made as a hollow extrusion, rather than pressed. Aluminium matting allows greater quantities to be airlifted. Its greater scrap value encourages theft, so steel is preferred for larger or long-term installations.