The Douglas C-54 Skymaster was a four-engined transport aircraft used by the United States Army Air Forces in World War II and the Korean War. Like the Douglas C-47 Skytrain, the C-54 Skymaster was derived from a civilian airliner, the Douglas DC-4. Besides transport of cargo, the C-54 also carried presidents, prime ministers, and military staff. Dozens of variants of the C-54 were employed in a wide variety of non-combat roles such as air-sea rescue, scientific and military research, and missile tracking and recovery. During the Berlin Airlift it hauled coal and food supplies to West Berlin. After the Korean War it continued to be used for military and civilian uses by more than 30 countries. This was one of the first aircraft to carry the President of the United States. 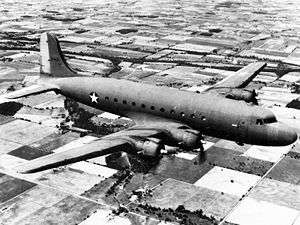 The original DC-4 was abandoned in favor of a smaller, less-complex four-engined design. This newer design was also designated DC-4, leading the earlier design to be re-designated DC-4E (E for "experimental"). Before the definitive DC-4 could enter service the outbreak of World War II meant production was channeled to the United States Army Air Forces and the type was given the military designation C-54 Skymaster, with US Navy aircraft designated Douglas R5D. The first aircraft, a C-54, flew from Clover Field in Santa Monica, California on 14 February 1942. With the introduction of the Tri-Service aircraft designation system in 1962, all R5Ds were re-designated C-54. In the end, only 80 DC-4s were built, the remaining aircraft being C-54s.

C-54s began service with the USAAF in 1942, carrying up to 26 passengers, later versions carrying up to 50 passengers. The C-54 was one of the most commonly used long-range transports by the U.S. armed forces in World War II. Of the C-54s produced, 515 were manufactured in Santa Monica, California and 655 were manufactured at Orchard Place/Douglas Field, in unincorporated Cook County, Illinois, near Chicago (later the site of O'Hare International Airport).[1] 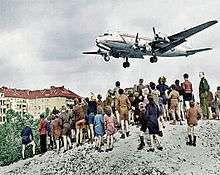 A C-54 landing at Tempelhof airport during the Berlin Airlift.

During World War II, the C-54 was used by Franklin D. Roosevelt, Douglas MacArthur, and Winston Churchill. The American delegates to the Casablanca Conference used the Skymaster.[2] The C-54 was also used by the Royal Air Force, the French Air Force, and the armed forces of at least 12 other nations.

President Harry S. Truman signed the National Security Act of 1947, which created the U.S. Air Force, on board "Sacred Cow", the Presidential VC-54C which is preserved at the National Museum of the United States Air Force near Dayton, Ohio. More than 300 C-54s and R5Ds formed the backbone of the US contribution to the Berlin Airlift in 1948. They also served as the main airlift during the Korean War. After the Korean War, the C-54 was replaced by the Douglas C-124 Globemaster II, but continued to be used by the U.S. Air Force until 1972. The last active C-54 Skymaster in U.S. Navy service (C-54Q, BuNo 56501, of the Navy Test Pilot School, NAS Patuxent River) was retired on 2 April 1974.[3]

In late 1945, several hundred C-54s were surplus to U.S. military requirements and these were converted for civil airline operation, many by Douglas Aircraft at its aircraft plants. The aircraft were sold to airlines around the world. By January 1946, Pan American Airways was operating their Skymasters on transatlantic scheduled services to Europe and beyond. Trans-Pacific schedules from San Francisco to Auckland began on 6 June 1946.[4] After disposal by the U.S. Air Force and U.S. Navy, many C-54s were modified for use in civilian firefighting and air tanker roles. This included fitting tanks inside and under the fuselage and the fitting of dumping and spraying equipment also on the wing trailing edges. C-54s continued in this role until the late 1990s. 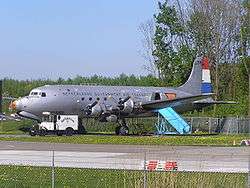 Netherlands Government Air Transport C-54A on display at the Aviodrome. 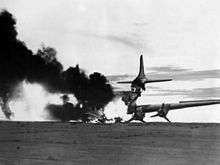 On 26 January 1950, a C-54D operated by the United States Air Force disappeared during a flight between Anchorage-Elmendorf Air Force Base (Alaska) and Great Falls Air Force Base (Montana) with a crew of eight and 36 passengers (34 service personnel and two civilians).[5][6] No trace of the aircraft or its occupants has ever been found.

On 29 April 1952, an Air France Douglas C-54A (registration F-BELI) operating a scheduled service from Frankfurt Rhein-Main Airport to Berlin Tempelhof Airport came under sustained attack from two Soviet MiG 15 fighters while passing through one of the Allied air corridors over East Germany. Although the attack had severely damaged the aircraft, necessitating the shutdown of engines number three and four, the pilot in command of the aircraft managed to carry out a safe emergency landing at Tempelhof Airport. A subsequent inspection of the aircraft's damage revealed that it had been hit by 89 shots fired from the Soviet MiGs. There were no fatalities among the 17 occupants (six crew, 11 passengers) despite the severity of the attack. The Soviet military authorities defended this attack on an unarmed civilian aircraft by claiming the Air France plane was outside the air corridor at the time of attack.[7]

On 28 March 1964, a C-54A disappeared over the Pacific (about 1120 km west of San Francisco—last reported position: 29°20′N 135°00′W﻿ / ﻿29.33°N 135.00°W﻿ / 29.33; -135.00) on an executive passenger flight from Honolulu International Airport, Hawaii to Los Angeles International Airport, California. The pilot reported a fire in No. 2 engine, which might make it necessary to ditch. Nothing more was heard from the aircraft, nor was any trace of it found despite an extensive search. Three crew and six passengers died in the accident.[12] 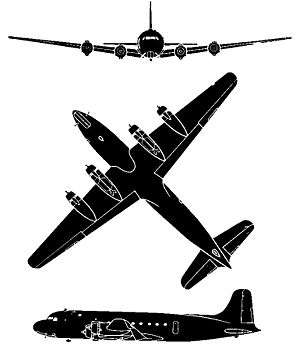 Cockpit of a restored C-54 Skymaster

A C-54, registration C-FIQM (Buffalo 5-721 (tail 57)), was used as a substitute Lancaster bomber due to its similar top speed and maximum payload, for a recreation of Operation Chastise with its bouncing bomb. It was filmed in the UK documentary Dambusters: Building the Bouncing Bomb, Canadian documentary Dambusters Fly Again, Nova season 39 episode "Bombing Hitler's Dams", and Ice Pilots NWT season 3 episode 2 "Dambusters".[13][14][15][16][17][18]

The movie The Big Lift, starring Montgomery Clift shows extensive operations of the C-54 as it was shot on location during the peak of the Berlin Airlift in 1949.