For other uses, see Sandbag (disambiguation). 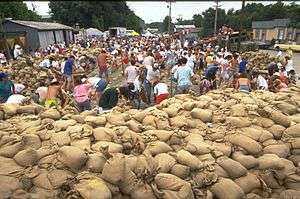 Residents and volunteers work to fill sandbags during the Mississippi and Missouri river floods of 1993. 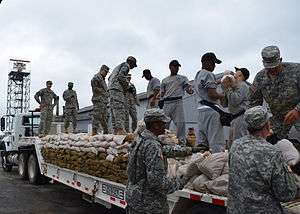 Members of the Georgia National Guard filling sandbags in preparation for floods.

A sandbag is a bag or sack made of hessian (burlap), polypropylene or other sturdy materials that is filled with sand or soil and used for such purposes as flood control, military fortification, shielding glass windows in war zones, ballast, and in other applications requiring mobile fortification.

The advantages are that the bags and sand are inexpensive. When empty, the bags are compact and lightweight for easy storage and transportation. They can be brought to a site empty and filled with local sand or soil. Disadvantages are that filling bags is labor-intensive. Without proper training, sandbag walls can be constructed improperly causing them to fail at a lower height than expected. They can degrade prematurely in the sun and elements once deployed. They can also become contaminated by flood waters making them difficult to deal with after flood waters recede.[1] 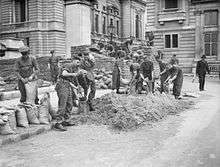 Troops from the Grenadier Guards constructing sandbag defences around government buildings in Birdcage Walk, London, May 1940.

Sandbags may be used during emergencies when rivers threaten to overflow their banks, or when a levee or dike is damaged. They may also be used in non-emergency situations (or after an emergency) as a foundation for new levees or other water-control structures. Sandbags are not always effective in preventing flooding because water will eventually seep through the bags and finer materials, like clay, may leak out through the seams. After usage, dry sandbags can be stored for future use. Wet bags may need to be disposed in a landfill as they may be contaminated by chemicals and fecal matter.[1]

The military uses sandbags for field fortifications and as a temporary measure to protect civilian structures. Because burlap and sand are inexpensive, large protective barriers can be erected cheaply. The friction created by moving soil or sand grains and multiple tiny air gaps makes sandbags an efficient dissipator of explosive blast.[2] The most common sizes for sandbags are 14 by 26 inches (36 by 66 cm) to 17 by 32 inches (43 by 81 cm).[3][4] These dimensions, and the weight of sand a bag this size can hold, allow for the construction of an interlocking wall like brickwork. Individual filled bags are not too heavy to lift and move into place. They may be laid in excavated defences as revetment, or as free-standing walls above ground where excavations are impractical. As plain burlap sandbags deteriorate fairly quickly, sandbag structures meant to remain in place for a long time may be painted with a portland cement slurry to reduce the effects of rot and abrasion. Cotton ducking sandbags last considerably longer than burlap and are hence preferable for long-term use. However, the vast majority of sandbags used by modern military and for flood prevention are made of circular woven polypropylene.

Sandbags have been used since at least the late 18th century. For example, British loyalists used sandbag and log fortifications in the 1781 Siege of Ninety-Six during the American Revolutionary War. Nathanael Greene was familiar enough with the fortification technique to equip his troops with hooks to pull down the sandbag and log walls when they stormed the Star Redoubt in Ninety Six, South Carolina.[5] Sandbags have traditionally been filled manually using shovels. Since the 1990s, machine filling has become more common, allowing the work to be done more quickly and efficiently.

Bulk bags, also known as big bags, are much larger than traditional sandbags. Moving a bag of this size typically requires a forklift truck. Thailand utilized bulk bags filled with sand to erect temporary walls to protect against the 2011 Thailand floods. 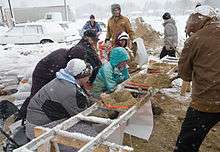 Sandbags being filled using a ladder on sawhorses with traffic cones as chutes or funnels, Moorhead, Minnesota, 2009.

Sandbags are also used for disposable ballast in gas balloons, and as counterweights for theatre sets.

Sandbags can also be carried within vehicles to provide improved traction during inclement weather (typically stored above the drive wheels where the increased weight improves traction). If ever stuck, sand can be removed and placed directly onto the slippery surface thereby providing greatly improved traction. Sandbags are also used by off-road enthusiasts instead of sand plates or sand ladders to assist the vehicle to get traction and momentum after being stuck in soft sand. The same sandbags can be used to bridge deep holes or ditches. Apart from being very light and taking very little space (when empty), the sandbags are a much cheaper option than any of the other options (sand plates, sand ladders, multipurpose bags, etc.).

In games and various kinds of adversarial settings, the term sandbagging refers to the practice of purposely placing oneself in a weaker position so as to give the deceptive impression that one is less skilled than one truly is.

Sandbags are often used to temporarily stabilize soil from erosion, such as oceanfront structures whose foundations have been undermined by heavy waves.

In addition, sandbags are often used when shooting a long gun, specifically a rifle, from a rest, as it provides support for the weapon, allowing for less movement during shooting.

Sandbags of various sizes and weights can be used for exercise or resistance training.[7]

The word can also refer to a simple weapon consisting of a small bag filled with sand for use as a cudgel typically by criminals, or to the act of striking a person on the head with such a weapon.[8] This usage is obsolescent in normal speech, appearing mainly in legal codes. However the verb form is extended metaphorically in several slang expressions.